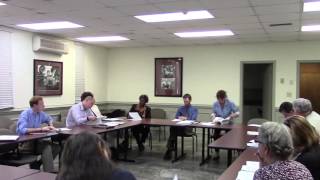 Very interesting input on the second Workshop on updating the Lowndes County Comprehensive Plan, including quite a bit about agriculture, rivers, and roads. Educational issues are in the Update, including the underlying issue: poverty.

See also the invitation with a link to the Workbook draft used at that meeting.

Here are links to the LAKE videos of the two main topics, followed by a video playlist. END_OF_DOCUMENT_TOKEN_TO_BE_REPLACED

Public notice via the VDT, The Lowndes County Board of Elections will hold a Special Called Meeting on 8 July 2014, 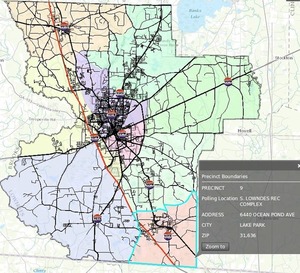 The Lowndes County Board of Elections will hold a Special Called Meeting on 8 July 2014, at 5:30 p.m., and a regularly scheduled meeting on Tuesday, 22 July 2014 at 9 a.m., to discuss precinct consolidation. The public is invited to attend.

The meeting will be held at the Lowndes County Board of Elections office at 2808 N Oak St., Valdosta, GA 31602.

Local school boards do not have the legal authority to expend funds or other resources to advocate or oppose the ratification of a constitutional amendment by the voters. They may not do this directly or indirectly through associations to which they may belong….

As Jim Galloway wrote yesterday for the AJC in Sam Olens orders local school boards to stay out of charter school fight,

And would that include organizations like PAGE, which produced the slides that a local middle school teacher used last week? What about that teacher, or Dr. Troy Davis, speaking a few weeks earlier, both on their own time?

Olens’ letter would apply to what the VDT said was in the VBOE and LCBOE joint resolution, at least the part about “The resolution explicitly states that the boards are asking voters to not support the Constitutional Amendment relative to state charter schools.”

But what does Olens mean, duly elected local school boards don’t have authority to express opinions about educational matters that would directly affect the people who elected them?

Why has Sam Olens suddenly gotten religion about this now, after he was silent last year when both VBOE and LCBOE adopted resolutions against the school “unification” referendum? Where was he when both boards of education hosted numerous forums opposing consolidation?

Will he next be telling the Valdosta City Council it can’t pass a resolution opposing a referendum? What exactly is the difference between that elected body and an elected school board as far as expressing such an opinion? And all of those resolutions were non-binding opinions.

Will Sam Olens next be telling the VDT it can’t editorialize against the charter school amendment?

How desperate are the pushers of the charter school amendment?

END_OF_DOCUMENT_TOKEN_TO_BE_REPLACED

Apparently the Bill and Melinda Gates Foundation gave more money to ALEC than Pepsi, Coke, Kraft, and Intuit combined, but no more. Who’s next?

The Bill and Melinda Gates Foundation became the latest high profile backer of the conservative American Legislative Exchange Council to withdraw financial support after pressure from groups opposed to ALEC’s support of “stand your ground” laws and Voter ID.

Roll Call reports that a foundation spokesperson said it does not plan to make any future grants to the organization. The Bill and Melinda Gates Foundation contributed more than $375,000 to ALEC in the past two years.

Meanwhile, according to ALEC Watch:

ALEC’s more than three hundred corporate sponsors pay annual membership dues ranging from $5,000 to $50,000 to advance their agendas, plus additional fees of $1,500 to $5,000 a year to participate in ALEC’s various task forces, where, according to an ALEC publication, “legislators welcome their private-sector counterparts to the table as equals.”

So what excuse does the Bill and Melinda Gates Foundation have? Jessica Pieklo’s article says:

END_OF_DOCUMENT_TOKEN_TO_BE_REPLACED

credits for private school tuition, I interpret today’s VDT articles as part of a political agenda to further dismantle a Georgia Constitutional right to Free Public School Education. Here we are again, let’s paint the schools as failing and then try to legitimize further defunding of the schools. And instead of Free Public Education the students from poor families will continue to get what ever is left when the well-to-do take their large piece of the public school education pie.

END_OF_DOCUMENT_TOKEN_TO_BE_REPLACED

I could use quite a few verbs, adjectives, nouns to describe my year with K-12 and NONE of those would be complimentary. Public funds are used to the pay salaries plus all other expenses for this privilege to freely HOME SCHOOL a child. The lead educator is the LEARNING COACH (who is the stay-at-home relative). If I had wanted to be a TEACHER, I would have chosen an education career. Bottom line-slick way to divert public funds for private profit…. And now those kids can participate in public school sports. All those voices that rose up to defeat Lowndes-Valdosta Consolidation should RUN-not WALK to stop the PRIVATIZATION of PUBLIC EDUCATION in Georgia!Checking to

see where Amy Carter, Ron Borders, Jay Shaw and other POLITICIANS stand on this issue. Been out of loop for a minute..Trying to make up for lost time with K-12..I am sure someone will update me. Thank you for your advocacy.

I don’t think Ron Borders holds any elected office, and Jay Shaw is retired; his son Jason Shaw was elected to the same statehouse seat. Here’s a list of our state elected officials.

in the House, Amy Carter and Ellis Black voted for it, and Jason Shaw voted against it. In the Senate, Tim Golden voted for it. I believe that means it now goes to a statewide referendum in November.

in the House, Amy Carter and Ellis Black voted for it, and Jason Shaw did not vote. In the Senate, Tim Golden voted for it Monday.

There is one new candidate running for one of these statehouse seats so far, JC Cunningham, and K-12 education is top of his issues list:

I will work to improve our schools so our children have every opportunity to succeed. Too many students have dropped out of high school, and we have lost far too many good teachers due to budget cuts to our K-12 schools because, “…we live in challenging times and tight budgets”. The budget could not have been that tight if they were $23.5 million dollars available to fund an Administration building for Valdosta State University. Our elected representative should have been advising the Governor to Ear Mark that $23.5 million for the Georgia Department of Education in order to retain and hire more teachers and Para Pros.

Saturday I heard him say he opposes the charter schools constitutional amendment.

Just a decade ago, private prisons were a dying industry awash in corruption and mired in lawsuits, particularly Corrections Corporation of America (CCA), the nation’s largest private prison operator. Today, these companies are booming once again, yet the lawsuits and scandals continue to pile up. Meanwhile, more and more evidence shows that compared to publicly run prisons, private jails are filthier, more violent, less accountable, and contrary to what privatization advocates peddle as truth, do not save money. In fact, more recent findings suggest that private prisons could be more costly.

So why are they still in business?

In a recently published report, “Banking on Bondage: Mass Incarceration and Private Prisons,” the American Civil Liberties Union examines the history of prison privatization and finds that private prison companies owe their continued and prosperous existence to skyrocketing immigration detention post September 11 as well as the firm hold they have gained over elected and appointed officials.