Friday’s vote started at least a year and a half ago. Organized years-long activism is paying off for everyone.

Summer before last, after statewide requests by Georgia Sierra Club, Greenlaw, and many others: Georgia PSC required Georgia Power to buy twice as much solar power. About a year later, Mary Landers, Savannahnow, 18 November 2014, Georgia is fastest growing solar market,

Last year the Georgia Public Service Commission approved a motion for Georgia Power, the state’s largest utility, to add 525 MW of solar power generation to its portfolio by 2016.

“That pushed out the growth of solar, especially projecting forward,” END_OF_DOCUMENT_TOKEN_TO_BE_REPLACED

The Alliance for Solar Choice, a group made up of END_OF_DOCUMENT_TOKEN_TO_BE_REPLACED

The answer is: Burnt Church Road is the location of the 2 MW Lakeland Solar Farm, conveniently next to what appears to be a Georgia Power substation. The landowner appears from the Lanier County tax assessor maps to be Patten Seed Company. Compare this map to the big image in the previous post and they clearly show the same location. Apparently nobody has satellite images of Lanier County new enough yet to show the solar panels. END_OF_DOCUMENT_TOKEN_TO_BE_REPLACED

You can see by this Evergreen Solar Services picture that END_OF_DOCUMENT_TOKEN_TO_BE_REPLACED

Maybe Georgia PSC could do about Georgia Power’s nuclear Plant Vogtle what Mississippi PSC did about Mississippi Power’s Kemper Coal: hold their parent Southern Company accountable for cost overruns. And for pipelines!

The PSC voted unanimously to require Mississippi Power to provide additional documents justifying their spending on the Kemper plant. The hearing is set for May 2014, when the plant was originally supposed to go online.

“If the PSC rejects some of the spending as imprudent, it could add to the $1 billion in costs that shareholders have already agreed to absorb,” the Associated Press reported last month.

If you missed Savannah, Columbus tomorrow, then Gainesville, Athanes, and Atlanta: you can speak up against Georgia Power’s attempt to charge you for saving them money by generating solar power. 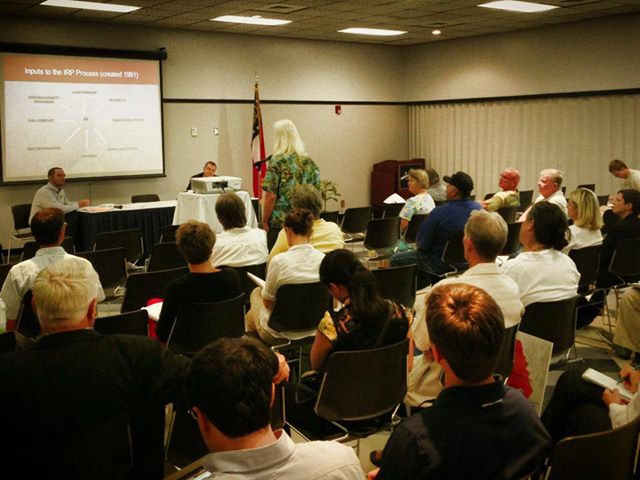 “Unconscionable” and “theft” were two of the words used Thursday evening to describe a residential rate hike and fee on solar installations proposed by Georgia Power.

More than 50 people attended a meeting sponsored by Georgia Watch and the Sierra Club at the Coastal Georgia Center to discuss the issues.

The rate hike, proposed in July, would have average residential customers paying almost $8 more a month. Some homeowners with solar panels would pay a new monthly fee of about $22 by Georgia Power’s estimations.

Citizens are calling for GA PSC Chuck Eaton to call it off. Since apparently GA PSC does have authority over natural gas pipelines, maybe we should talk to our Commissioner H. Doug Everett about that proposed Sabal Trail natural gas pipeline through Lowndes County. Wasting resources on natural gas now is foolish when solar will overtake everything within a decade and we should be getting on with sun power for Lowndes County instead of methane for Florida.

An Atlanta Gas Light (AGL) regulator station that is being constructed on Parcel 36 off of Clairmont Rd., has been a project of concern for some time now. Site conditions such as trenches full of water, deteriorating banks, eroding foundations, corrosion, substandard and hazardous construction practices, and a host of other issues, have become the catalyst to amplifying an effort to have Public Service Commissioner, Chuck Eaton, intervene and ask that AGL cease construction and remove the station.

Yes, and moving away from baseload coal, nukes, and natural gas and towards distributed solar and wind power will help with that, both directly by making the grid more resilient, and indirectly by slowing climate change.

Clare Foran wrote for NationalJournal 12 August 2013, Climate Change Is Threatening the Power Grid: So says the White House, in a new report that recommends strengthening the grid.

Just days away from the 10-year anniversary of the worst power outage in U.S. history, the White House and the Energy Department released a report on Monday evaluating the resiliency of the nation’s electric grid and recommending steps to prevent future blackouts.

The report called storms and severe weather “the leading cause of power outages in the United States,” and warned against the steep cost of weather-related damage to the electric grid. It put the price tag for electrical failures caused by inclement weather at between $18 billion and $33 billion annually, and noted that costs have increased in recent years, jumping from a range of $14 billion to $26 billion in 2003 to $27 billion to $52 billion in 2012. Storms exceeding a billion dollars in damages (electrical and otherwise) have also become more frequent in the past decade, as the chart below shows.

Well, Entergy’s Arkansas Nuclear 1 (ANO1) is still down more than four months after a fatal accident (hey, look at that; END_OF_DOCUMENT_TOKEN_TO_BE_REPLACED