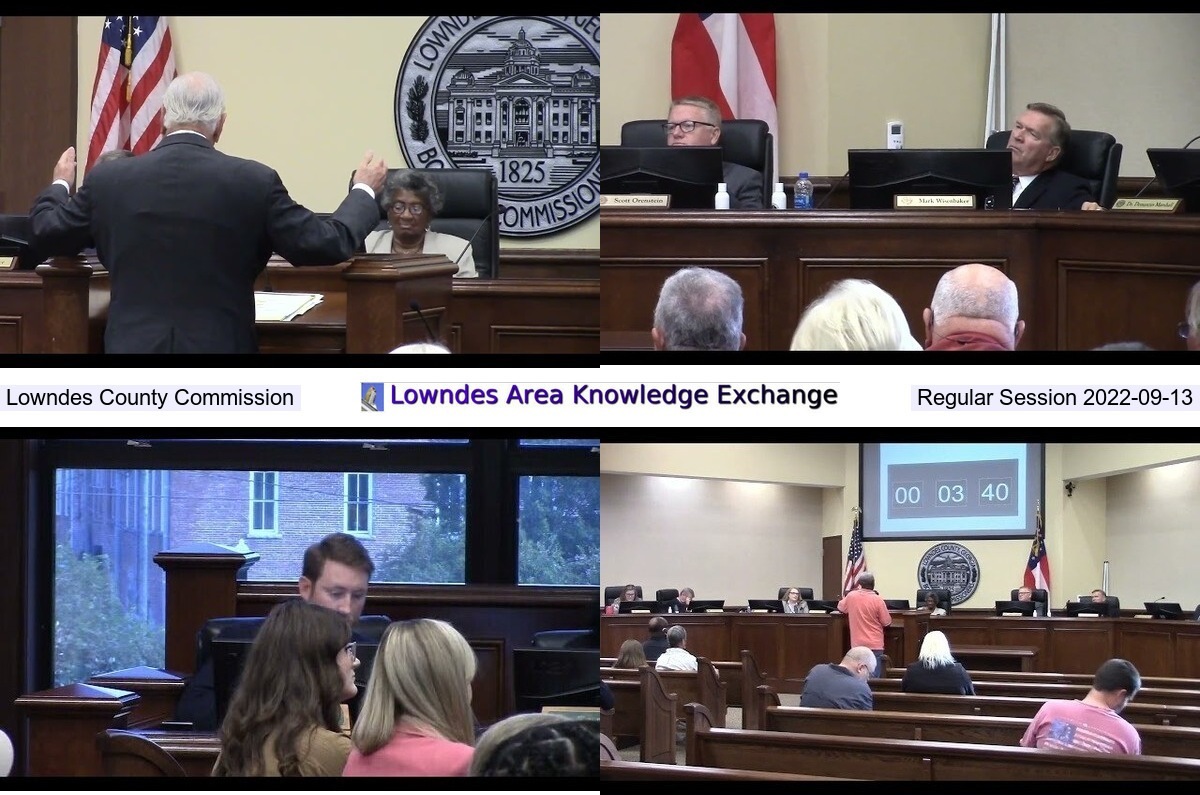 Below are links to each LAKE video of each agenda item, with a few notes, followed by a LAKE video playlist. See also END_OF_DOCUMENT_TOKEN_TO_BE_REPLACED

Food pantries (outdoor boxes attached to buildings or freestanding in an agency/business yard) in this area are up to fourteen.

If you have been blessed, consider refilling the shelves with non perishable foods, personal hygiene items and toiletries to help people experiencing homelessness. 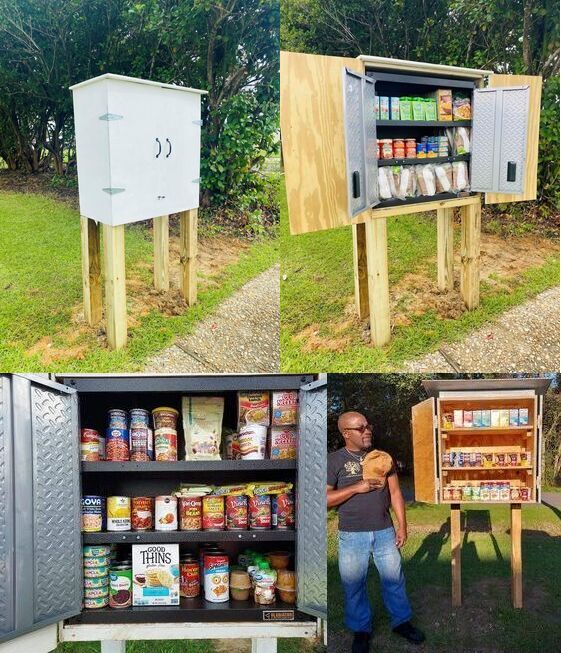 END_OF_DOCUMENT_TOKEN_TO_BE_REPLACED

Other than the seven-minute not-on-the-agenda Georgia Forestry presentation by Lowndes County Chief Ranger Mike Williford, the highest-dollar item got the most discussion: Griner Park, at the corner of Webster and Ashley Street.

There was no discussion of the items about redoing their botched rezoning decision.

They did kvetch about each of the extraterritorial jurisdiction items for water and sewer, alleging it was all somebody else’s fault. But why did the county not catch these earlier?

That was at the Work Session yesterday morning. The Lowndes County Commission voted this evening at their Regular Session. 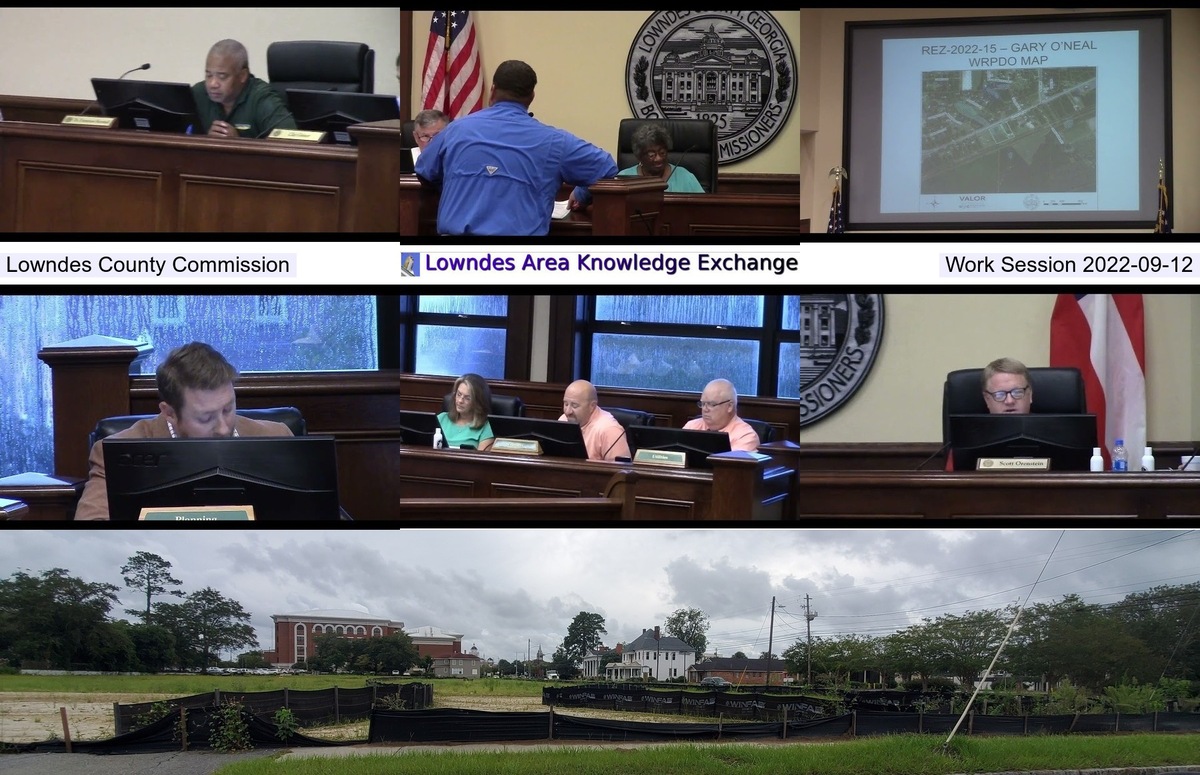 Videos and a picture

Some Commissioners seemed unclear on why they were spending so much on Griner Park. Here’s Gretchen’s take: END_OF_DOCUMENT_TOKEN_TO_BE_REPLACED

The newspaper of record reported on the unusual redo of a zoning decision by the Lowndes County Commission, noting the Commissioners did not follow the law in at least two ways.

But it did not say who discovered those infractions: the County Attorney? The County Planner? The Chairman who cast the tie-breaking vote? Somebody who sued or threatened to sue?

Want to dig into that question, VDT?

Meanwhile, the Commission will proceed with correcting its infractions in three agenda items this evening. 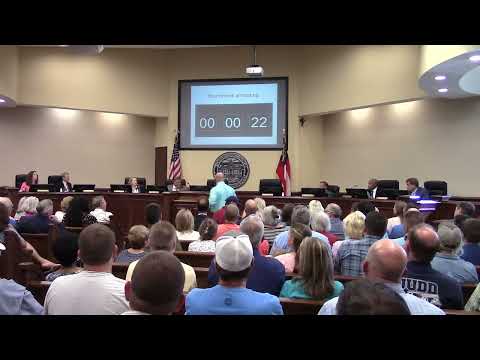 VALDOSTA — The Lowndes County Commission will have to revisit a controversial rezoning decision in light of a discovery that the original vote was invalid due to a “failure to follow zoning procedures.”

Lowndes County will approve spending almost $3 million this week, on a downtown Valdosta park and a railroad crossing, but you wouldn’t know that from the agenda. 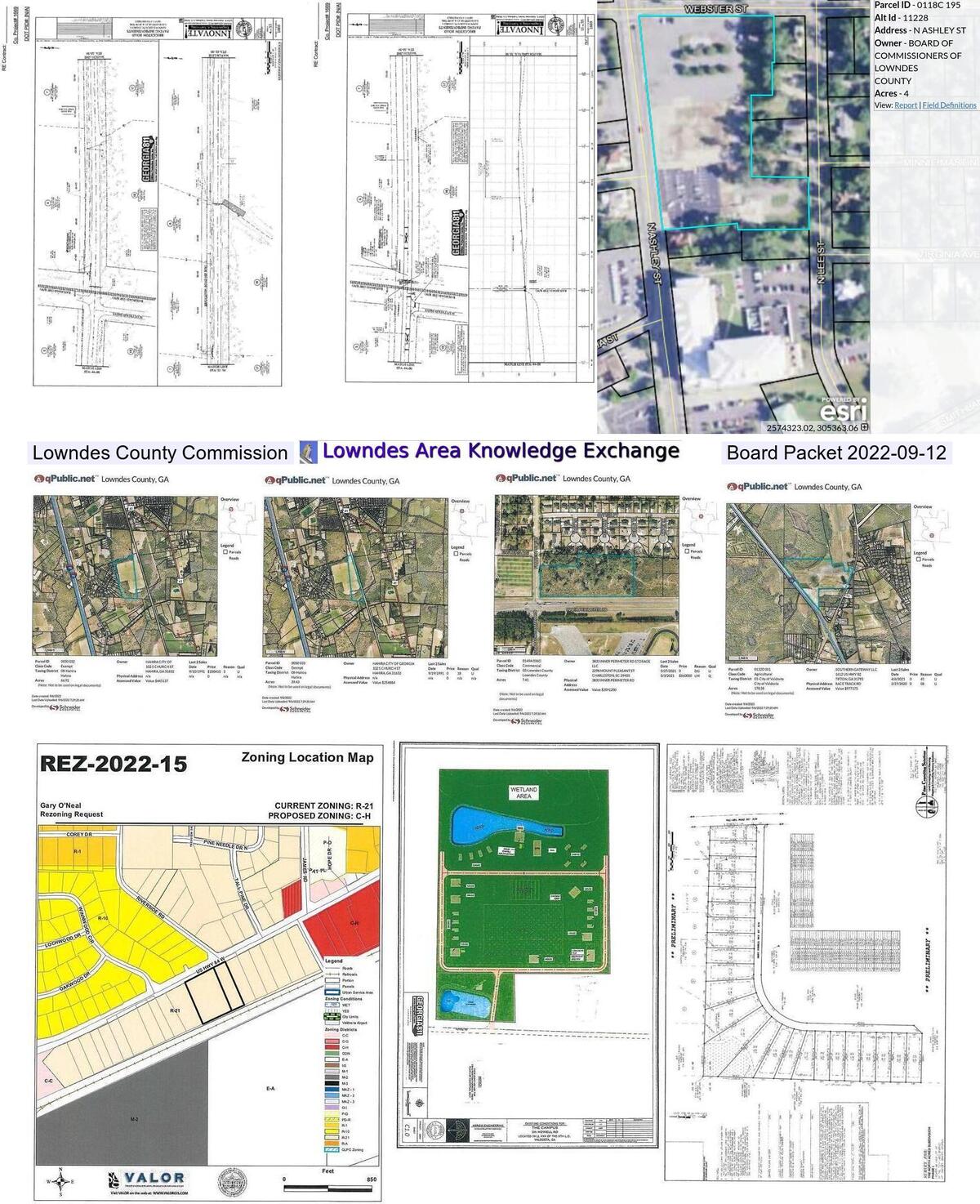 Fortunately, the board packet, received in response to a LAKE open records request, is on the LAKE website.

Maybe Lowndes County could put board packets on its own website, like other counties large and small in Georgia and Florida have been doing for many years.

The county will also redo two rezoning decisions for which the the Chairman previously decided split votes.

Plus three extraterritorial jurisdiction water and sewer requests, one from Hahira for a sprayfield, and two for commercial properties by Valdosta.

And the county is accepting infrastructure for a subdivision, while as usual pretending that won’t cost the taxpayers anything.

Nobody seems to remember the Lowndes County Commission ever redoing a rezoning public hearing. Possibly this is what they’ve been holding Executive Sessions about lately.

Thanks to Jane Fleming Osborn for spotting this pair of public notices about redoing the same rezoning that appeared in the Valdosta Daily Times, apparently on August 29, 2022. 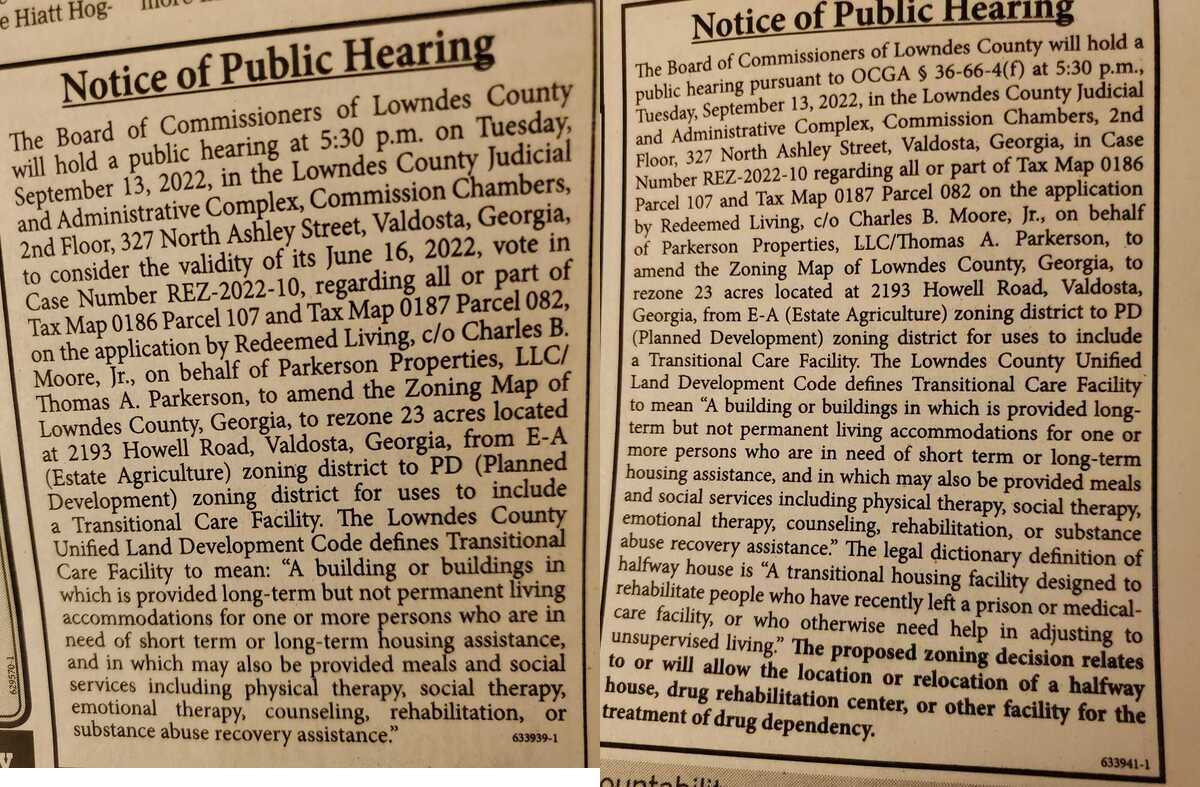 One is to consider the validity of the previous vote. Then they previously rezoned this property on June 16, 2022, one Commissioner was absent, and the Chairman decided a split vote.

The Public Notice is about the rezoning itself, with a prominent warning tacked on the end that it’s for a halfway house for drug rehabilitation. Apparently lack of that last bit was a legal problem END_OF_DOCUMENT_TOKEN_TO_BE_REPLACED

A very rare meeting: the Lowndes County Commission considered two rezonings, and did not approve either of them! 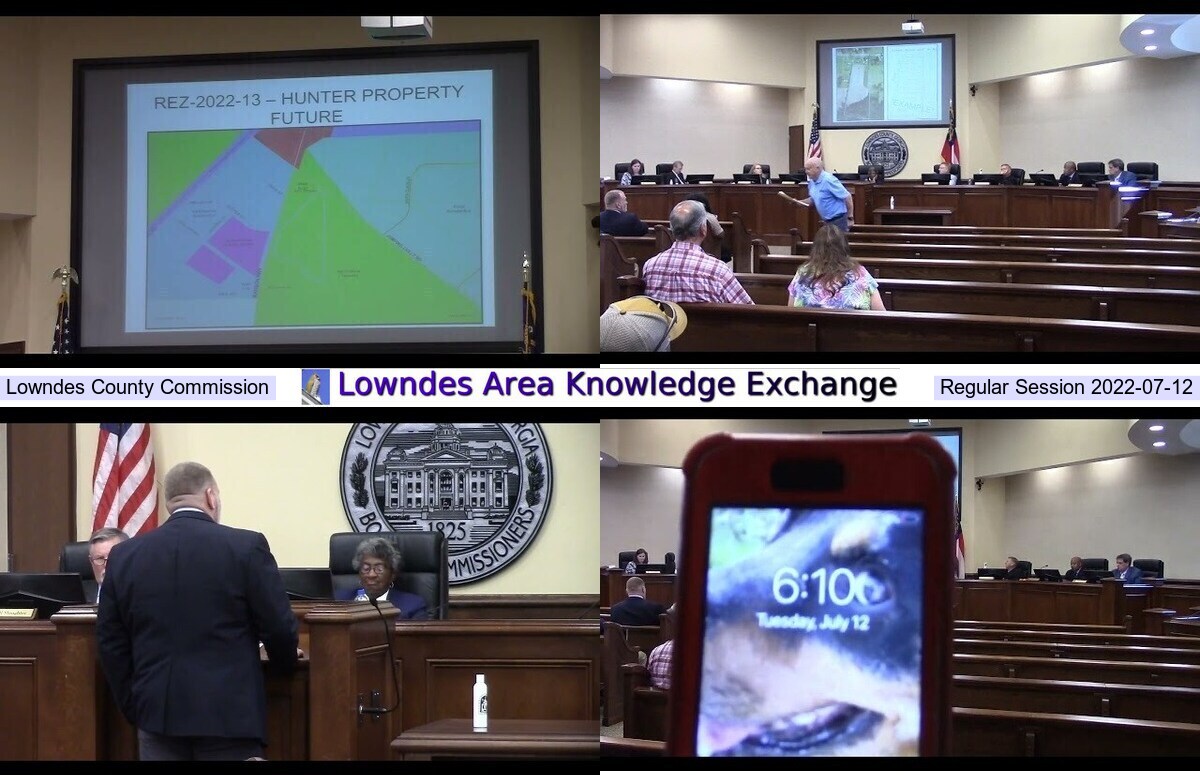 Everything else sailed through.

Below are links to each LAKE video of each agenda item, with a few notes by Gretchen Quarterman, followed by a LAKE video playlist. See also the END_OF_DOCUMENT_TOKEN_TO_BE_REPLACED

Two weeks ago at the Lowndes County Commission Work Session, there was much confusion about both of the rezonings, mostly about how many acres were being requested to be rezoned, but also about frontage on a road where no rezoning sign had been posted. 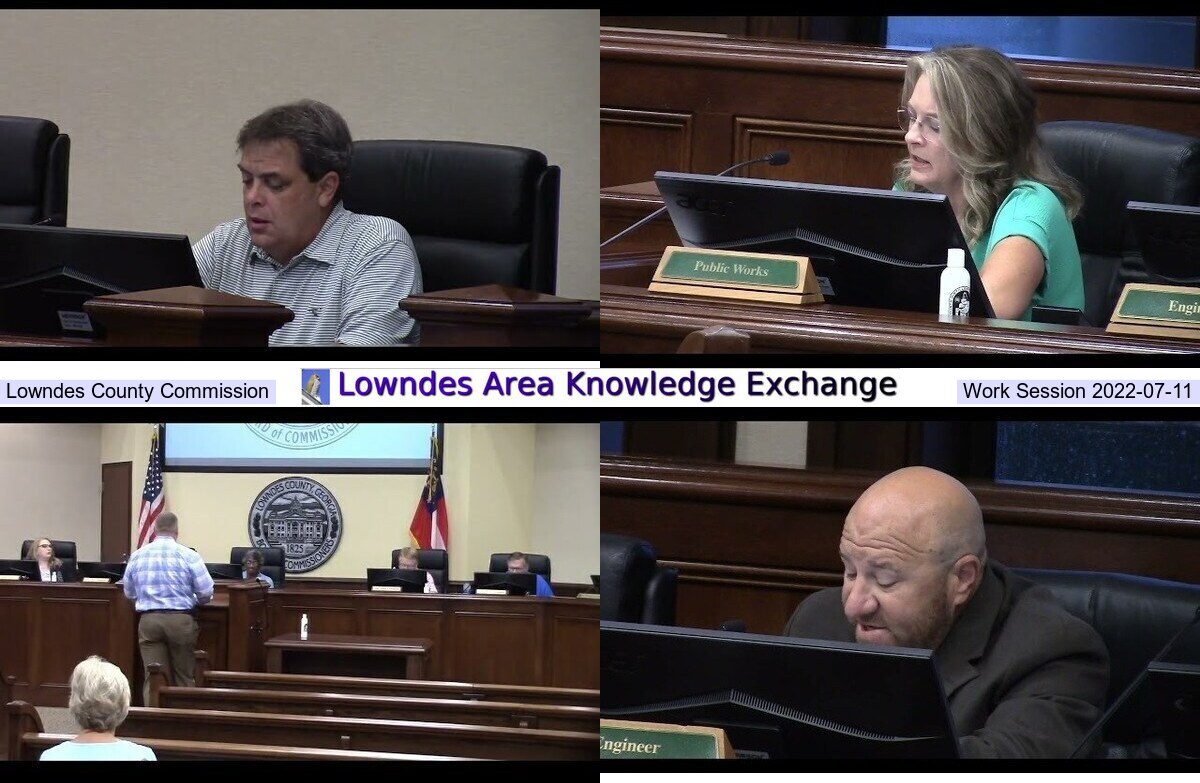 Below are links to each LAKE video of each agenda item, with a few notes by Gretchen Quarterman, followed by a LAKE video playlist. See also END_OF_DOCUMENT_TOKEN_TO_BE_REPLACED

Received Friday in response to a Monday open records request (it did come with an apology for being late), the board packet for the July 11 and 12, 2022, Lowndes County Commission meetings is on the LAKE website.

This morning at the Lowndes County Commission Work Session, two appointments to the Hospital Authority of Valdosta and Lowndes County with six candidates, two small rezonings, a reimbursed grant for Juvenile Justice Court, renewal of the mosquito contract, and abandonment of some of Boring Pond Road.

Here are the candidates for END_OF_DOCUMENT_TOKEN_TO_BE_REPLACED