The Flatlanders Arts & Crafts Show features a variety of antiques, collectibles, food and beverages. It is one of the oldest annual arts and crafts shows, and is held each Labor Day weekend at the Threatte Center, just inside the city limits of Lakeland, Georgia.

The answer is: Burnt Church Road is the location of the 2 MW Lakeland Solar Farm, conveniently next to what appears to be a Georgia Power substation. The landowner appears from the Lanier County tax assessor maps to be Patten Seed Company. Compare this map to the big image in the previous post and they clearly show the same location. Apparently nobody has satellite images of Lanier County new enough yet to show the solar panels. END_OF_DOCUMENT_TOKEN_TO_BE_REPLACED

You can see by this Evergreen Solar Services picture that END_OF_DOCUMENT_TOKEN_TO_BE_REPLACED

Demolition debris buried without a permit? That happened in Lakeland, and it’s causing a heap of trouble for the City Council. Could such a thing also have happened in a nearby county?

There’s a new push to find out about dozens of potential environmental violations in the South Georgia city of Lakeland.

As we first reported last week, Georgia’s Environmental Protection Division issued a notice of violation for the city of Lakeland.

That notice lists twenty-three properties where demolition debris may be buried without a permit.

The city council has now unanimously approved the hiring of an engineering firm to assess those sites.

Stevenson & Palmer Engineering will be paid an hourly rate plus expenses not to exceed $15,000 without approval by the city.

There are claims of improperly demolishing, burning and burying dozens of homes.

END_OF_DOCUMENT_TOKEN_TO_BE_REPLACED 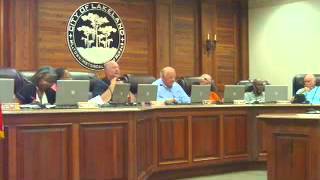 Local newspaper videos local government and puts it on YouTube! They have city council, county commission, board of education since September last year. It’s the

END_OF_DOCUMENT_TOKEN_TO_BE_REPLACED

Rain kept the numbers down, but the enthusiasm was strong in Lakeland at the Rally for HOPE, 24 March 2012.

This will be a Rally for the Hope Scholarship and a Voter Registration. Everyone concerned about HOPE is invited. We will have guest speakers and will hear from those students and families affected by the current status of HOPE.

The featured speaker was Janice Barrocas of HOPE for Georgia, which is running a three year nonpartisan campaign to save HOPE scholarships.

Bikram Mohanty explained that there will be a shortfall of $270 million for the HOPE scholarships in 2012. Janice Barrocas pointed out there were really two HOPEs now: the other one being the Zell Miller scholarships. Bikram showed a map that illustrates that very few Zell Miller Scholarships go to south Georgia.

Janice Barrocas and Bikram Mohanty discussed that HOPE is funded by a lottery, and lottery funds are down in the recession. The blue line on the chart is deposits from the lottery into the HOPE program, the red line is expenditures, and the green line, dropping rapidly, is reserves at the end of the year.

The end users of this program were not at the table

when the recent HOPE changes were passed. Especially students mostly found out when they got stuck with bigger bills they had to pay. Students and their families may still be too polite to mention they have financial troubles, but it’s time to break the culture of silence when it’s a choice between the family eating or the student going to school. Betty Marini pointed out students loans add up to $1 trillion dollars, which is a huge drag on the economy.

Matt Flumerfelt observed that there is a push for divestiture and privatization these days, and he wondered if the silence around the quick passage of the recent HOPE changes wasn’t because it was a money grab for the lottery funds.

Tech school HOPE is grants, and most tech school students get them. If HOPE went away, the lottery would END_OF_DOCUMENT_TOKEN_TO_BE_REPLACED What’s like the Azalea Festival crossed with the Happening?

The Frolic is among South Georgia’s longest running community festivals. The event was started by the Lanier County Lions Club on Labor Day, 1971, as a one-day event. Through the years the Frolic has grown to include diverse entertainment over as many as seven days. The 40-year-old frolic includes the Country Music Show, Miss Fall Frolic Beauty Pageant, the Dawg-Gone Good Race (5k and 1-Mile Run), and Flatlanders Arts & Crafts Show. The Lions Club continues as the overall sponsor of the frolic. Flatlander Arts & Crafts Show attracts artists and craftsmen from across Georgia and other nearby states. Now produced by the Lakeland-Lanier County Chamber of Commerce, the outdoor exhibition features special activities for children, a variety of food and beverages, and stage entertainment at intervals.