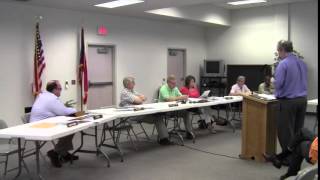 Both of Dr. Urbonas’ solar parking lot variance cases were tabled by ZBOA for a month so he could figure out a revised way to do it, probably involving connecting the supports to the building so they wouldn’t be accessory structures. Plus some sentiment that Valdosta City Council needed to address this issue that solar parking shouldn’t be classed as accessory structures. This was at the 5 August 2014 Regular Meeting of the Valdosta-Lowndes County Zoning Board of Appeals. ZBOA postponed Lowndes County’s Lake Alapaha water treatment plant variance so the county could think about it some more, presumably related to that no-bid contract for equipment upgrade.. Two other county Lowndes County variances ( minimum side yard setbacks (approved), lot access (denied). Both of Dr. Urbonas’ solar parking lot Valdosta cases were tabled for a month so he could figure out a revised way to do it, probably involving connecting the supports to the building so they wouldn’t be accessory structures. Plus some sentiment that Valdosta City Council needed to address this issue that solar parking shouldn’t be classed as accessory structures. 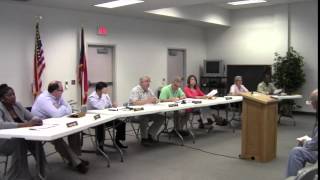 END_OF_DOCUMENT_TOKEN_TO_BE_REPLACED

When planting solar panels, be sure to tamp well: Actually, you may not want to try this at home, unless your panels have strong steel supports like these. Still, most solar panels are very sturdy.

Here’s my LTE in the VDT today. -jsq

A letter last week asked, “Do you have solar energy yourself?” Why yes, I do. When we installed solar panels on our farm workshop in 2009, the closest certified solar installer was in Marietta. There were only four in the state. Now there are forty. Georgia may yet catch up with North Carolina and even New Jersey!

Hannah Solar had all the paperwork ready when Okra Paradise Farms applied for a USDA REAP grant for more solar panels a few weeks ago. Much to our surprise,

END_OF_DOCUMENT_TOKEN_TO_BE_REPLACED
Grady Blankenship wrote a LTE in the VDT Wednesday, in which he asked “do you have solar energy yourself?” Why yes, yes, I do. And I have some questions for everyone at the end.

Back in 2009 we installed solar panels on our farm workshop. At the time the closest certified solar installer I could find was in Marietta. Four years ago there were 4 in the state. now there are forty. And that’s in a state that’s trailing North Carolina and even New Jersey in solar installations.

Also, I applied some weeks back for a USDA REAP grant for solar for Okra Paradise Farms.

Much to our surprise, last week we END_OF_DOCUMENT_TOKEN_TO_BE_REPLACED

Sources for the Skeptic

I have no idea why anyone would call companies in Mexico or Canada to research the feasibility of local solar energy projects. I also do not know what type of freezer the writer of “Seeking affordable solar energy” has. Either way, I will be happy to share more information, so that anyone interested in solar energy can do more research and educate himself.

At the state level you can contact the “Georgia Solar Energy Association” (www.gasolar.org/) to learn more about the viability of solar power in 2011, which is quite different from the situation in 2001. A larger solar firm our community END_OF_DOCUMENT_TOKEN_TO_BE_REPLACED

Peak power when you need it: solar. Somebody has been studying it, and addressing problems local decisionmakers right here in south Georgia have been raising.

Solar Power Generation in the US: Too expensive, or a bargain? by Richard Perez, ASRC, University at Albany, Ken Zweibel, GW Solar Institute, George Washington University, Thomas E. Hoff, Clean Power Research. That’s Albany, New York, but it applies even more to Albany, Georgia and Lowndes County, Georgia, since we’re so much farther south, with much more sun.

Let’s cut to the chase: The fuel of heat waves is the sun; a heat wave cannot take place without a massive local solar energy influx. The bottom part of Figure 2 illustrates an example of a heat wave in the southeastern US in the spring of 2010 and the top part of the figure shows the cloud cover at the same time: the qualitative agreement between solar availability and the regional heat wave is striking. Quantitative evidence has also shown that the mean availability of solar generation during the largest heat wave driven rolling blackouts in the US was nearly 90% ideal (Letendre et al. 2006). One of the most convincing examples, however, is the August 2003 Northeast blackout that lasted several days and cost nearly $8 billion region wide (Perez et al., 2004). The blackout was indirectly caused by high demand, fueled by a regional heat wave3. As little as 500 MW of distributed PV region wide would have kept every single cascading failure from feeding into one another and precipitating the outage. The analysis of a similar subcontinental scale blackout in the Western US a few years before that led to nearly identical conclusions (Perez et al., 1997).

In essence, the peak load driver, the sun via heat waves and A/C demand, is also the fuel powering solar electric technologies. Because of this natural synergy, the solar technologies deliver hard wired peak shaving capability for the locations/regions with the appropriate demand mix peak loads driven by commercial/industrial A/C that is to say, much of America. This capability remains significant up to 30% capacity penetration (Perez et al., 2010), representing a deployment potential of nearly 375 GW in the US.

The sun supplies solar power when you need it: at the same time the sun drives heat waves.

So what are they going to use for energy? END_OF_DOCUMENT_TOKEN_TO_BE_REPLACED

Compliments to Mayor Fretti for saying we will competitively expand the Wiregrass Solar plant!

Responding to George Rhynes’ point, I said that while I had recommended moving Citizens to be Heard to the end of the agenda, it never occured to me that it might get moved

after Council Comments, which did lead to an impression that Council did not want to hear and did not plan to respond. I noted that if Council videoed its own proceedings and put them on the web, that would help make the problem moot. I’m thinking videos distributed by the City Council itself would probably

get more citizens viewing them than ones distributed by bloggers like me and George and by LAKE.

My main point was that, even though Brad Lofton and Col. Ricketts apparently never told Mayor Fretti, there was a larger solar array in END_OF_DOCUMENT_TOKEN_TO_BE_REPLACED

Referring to Mary Gooding’s comments about people who wanted to see minutes probably going to be frustrated, I pointed out that END_OF_DOCUMENT_TOKEN_TO_BE_REPLACED