Kennedy said he’d be for nukes if they were safe or economical, but they are neither, while solar and wind are both. 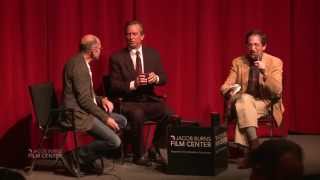 After calling the pro-nuke movie Pandora’s Promise a hoax, he addressed “safe” by pointing out the movie’s claimed former anti-nuke leaders were never leaders while major nuclear utility executives are indeed now anti-nuke leaders. (For example, I met former TVA Chairman S. David Freeman in DC where he was testifying against nukes.) Then Kennedy tore into Southern Company’s three-legged nuclear boondoggle and pointed out solar and wind are winning even against massive distortions in the economic playing field caused by public service commissions letting regulated utilities make the rest of us pay for their profits on uneconomic nukes.

There’s no individual and there’s no merchant utility that will build a nuclear power plant, because they’re so expensive. You can’t make money on it. The only ones who will build them are regulated utilities like the Southern Company in Georgia… because they make money by spending money. They get reimbursed for their capital costs plus 12 or 15% per year. So they’ll construct it once they get approval from the public utility commission. Then they want to spend as much money on their capital costs because they’re not paying for it. You and I are paying for it.

I don’t think Bill Gates, or I saw Paul Allen was one of the funders of this film, that they’re going to spend their own money building one of these [nuclear] plants….

You could make energy by burning prime rib, but why would you take the most expensive way to do it.

And by last fall, the cost per gigawatt of solar photovoltaic (PV) panels was already under $3 billion per gigawatt so distributed solar PV makes just as much sense as massive desert thermal solar, and both make far more economic sense than nuclear. Plus costs of solar PV keep going down, pushing solar deployments up like compound interest, while nukes always take years to build and always cost more than budgeted.

Southern Company is the king of nuke cost overruns, going 26 times overbudget per unit on Vogtle 1 and 2 and already 19 months late and about a billion dollarsoverbudget on Vogtle 3 and 4. Then there are the safety issues: a failed nuke can be Chernobyl or Fukushima and many nukes leak radioactive tritium into groundwater and vent radiation into the air, while a failed solar plant is a bunch of glass. I got into the [solar] industry to show that there was an alternative and that the alternative was economically viable. And not only that, on a level playing field, if we weren’t giving them the subsidies to the incumbents, our technologies would beat them and soundly. They simply couldn’t compete.

He called the movie’s claims that solar and wind don’t work one of the movie’s many big lies because even without a level playing field we already built more solar and wind power in this country last year “than we did all of the incumbents combined”. Plus you’ve got to fuel fossil or nuclear plants, not to mention the toxic waste issues, while once you build solar or wind “it’s free energy forever”. Kennedy also pointed out the electric grid in the U.S. could be rebuilt to deliver solar and wind power as needed for less than has already been spent on breeder reactors that are no longer in use. The filmmaker made no attempt to rebut any of Kennedy’s points about existing solar and wind technologies that already beat nukes, coal, and natural gas, instead going on about pie-in-the-sky modular reactors.

This all illustrates why the Georgia Public Service Commission needs to stop letting Georgia Power and Southern Company suck radioactive profits at the public teat and make them get on with replacing coal with solar instead of letting old coal plant sites sit unused for more than a decade. Oh, and GA PSC needs to halt the Plant Vogtle nuke boondoggle, which is even worse than Southern Company’s Kemper Coal plant in Mississippi as a huge transfer of wealth from the people of the state to a monopoly.

A monopoly that is supposed to be regulated as a public service. By the Public Service Commission whose Commissioners accept massive campaign contributions from employees and law firms of the utilities they regulate. It’s time for GA PSC to bat away the haze of coal smoke and the radioactive taint that surrounds them and go to bat against corruption and for the people of Georgia.

END_OF_DOCUMENT_TOKEN_TO_BE_REPLACED

VSU professor and student publish book chapter about films of Lowndes County. You, too, can submit a film about changes in local culture for the whole world to see.

The goal is simple: to get all of us who live in Lowndes County, Georgia,

Do you have a cause? If so, please make your own 90-second mini-documentary and we’ll see you in Valdosta the weekend between the Martin Luther King holiday and the Superbowl.