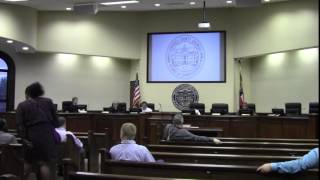 END_OF_DOCUMENT_TOKEN_TO_BE_REPLACED

Valdosta has a larger solar installation than Nashville, Tennessee, but Valdosta’s is hidden away at the Mud Creek Wastewater Treatment Plant while Nashville’s biggest is on its new Music City Center. Which do you think shows the most leadership, and will attract the most business?

LightWave Solar recently completed the installation of a 211 kilo-watt (kW) solar system for the Music City Center, and it is the largest solar installation in Nashville.

Installed within the guitar shaped structure on the roof, the system consists of 845 solar panels and four inverters weighing 1,800 pounds each. The system will generate approx. 271,000 kilowatt-hours per year, enough electricity to power the electric vehicle charging stations and lighting for the building. Over 25 years, the clean electricity will offset nearly 5,000 tons of carbon dioxide emissions, the equivalent of taking 920 cars off the road.

“This project shows great leadership on behalf of the city,” said Steve Johnson, President of LightWave Solar. “We applaud the mayor’s vision in making Nashville a more sustainable city with a bright future.”

And leadership can extend even beyond solar into water and habitat:

END_OF_DOCUMENT_TOKEN_TO_BE_REPLACED

Because Atlanta can’t get a grip on its water usage, the Georgia legislature is still trying to suck up Tennessee River water. If the legislature is willing to try that, how long before they try sucking up our Floridan Aquifer water for Atlanta?

Prefiled in December to be up early as the Georgia legisture starts meeting today, is a bill to try to move the northern border of Georgia to match an eighteenth century boundary that just happens to include a bit of the Tennessee River in Georgia. HR 4, Georgia and Tennessee; boundary dispute; propose settlement, was filed by Rep. Harry Geisinger, R – Roswell, District 48, and says in part:

Georgia is already in a three-decade-long dispute with Alabama and Florida over the Chattahoochee River. Does adding a dispute over the Tennessee River seem like a good idea to you?

And how can we best stop Atlanta from coming for our Floridan Aquifer?

Someone asked who to vote for who will represent the people more than the electric utilities, on Elect Georgia legislators and Public Service Commissioners who will let the sun shine on Georgia! OK, here’s my opinion.

Sec. State provides you with a sample ballot.

For PSC, vote for somebody who isn’t an incumbent (the incumbents are marked on the ballot). The election today is a primary, so you need to select a Democratic ballot (Steve Oppenheimer District 3 is not an incumbent) or a Republican ballot (Pam Davidson District 5 and Matt Reid District 3 are not incumbents).

For the legislature, here is a list of who voted for the nuke stealth tax as a charge on Georgia Power bills for electricity nobody will get for years if ever. On your ballot, see if somebody else is running against them. Around here, somebody is: Bikram Mohanty for State Senate District 8, Teresa Lawrence for State House District 174, and JC Cunningham for State House District 175, all Democrats, since the incumbents switched parties after being elected last time.

So, if you want solar and wind energy for jobs, energy independence, and profit in the state of Georgia, instead of Georgia Power’s bet-the-farm nuclear risk at Plant Vogtle and Southern Company’s natural gas fracking, that’s who I would vote for.

today is the final day to vote in this primary, and you and I’ll be going down to the precinct polling place to cast a ballot. Today’s the day!

have dropped so much they’re competitive with coal, natural gas, and nuclear. The only thing that stops Georgia from leading the country and the world in solar energy is our legislature and Public Service Commission kow-towing to the electric companies instead of serving the public. How about we elect Georgia legislators and PSC members who will change that?

How about if we elect legislators who will

How about instead we fully fund the existing 35% state tax rebate for renewable energy?

Last year Georgia legislators did double the money in that fund, but it’s still only $5 million a year and the funding for 2012 has already been used up. $5 million a year for power after it’s installed, while Georgia Power and Southern Company have already run $400 million over budget on nuclear energy that nobody will see for years, if ever! We need Georgia legislators who understand that Moore’s Law for solar means fast growth; growth in jobs, energy independence, and profit for Georgians.

world, all we really need to do is to pass something like SB 401 to modify that arrogant dinosaur of a 1973 Georgia Territoriality Electric Service Act that prevents you from getting financing to install solar generation and selling it through the grid at a profit, with the electric utility taking a cut and bragging rights.

It is time to let the south Georgia sun break through the clouds of power utility disinformation and regulatory capture. It is time for us to elect Georgia legislators and Georgia Public Service Commissioners who will let the sun shine on us in Georgia!

Solar energy continues to grow by leaps and bounds worldwide. Except in Georgia. Maybe we should change that. There’s an election going on right now.

Global investment in renewable energy reached a record of $257

billion last year, with solar attracting more than half the total spending, according to a U.N. report released Monday.

Investment in solar energy surged to $147 billion in 2011, a year-on-year increase of 52 percent thanks to strong demand for rooftop photovoltaic installations in Germany, Italy, China and Britain.

Large-scale solar thermal installations in Spain and the United States also contributed to growth during a fiercely competitive year for the solar industry. Several large American and German manufacturers fell victim to price pressure from Chinese rivals that helped to halve the cost of photovoltaic modules in 2011.

END_OF_DOCUMENT_TOKEN_TO_BE_REPLACED

If you're unemployed, you may not be able to afford a car: then how do you get to work even if you can find a job? As our own Industrial Authority's Community Assessment of last October said, we need public transportation to promote business by getting employees to jobs. T-SPLOST doesn't do that: it would widen more roads and build no public transportation.

CHATTANOOGA, Tenn. — In the two months since he lost his job

driving a delivery truck for a door company, Lebron Stinson has absorbed a bitter geography lesson about this riverfront city: The jobs are in one place, he is in another, and the bus does not bridge the divide.

Stinson lives downtown, where many of the factories that once employed willing hands have been converted into chic eateries. The majority of jobs are out in the suburbs, in the strip malls, office parks and chain restaurants that stretch eastward. Most of this sprawl lies beyond reach of the public bus system, and Stinson cannot afford a car.

That would be the plan for $7.5 million for a four line bus system that got cut first pass from the T-SPLOST project list, while widening a few miles of Old US 41 North got raised from $8 million to $12 million and is still in the final list.

T-SPLOST would promote more sprawl of exactly the kind we don't need. Let's not do that. CAA[sic] maintained it wasn’t the functional equivalent of a government agency, but the Appeals Court rejected that claim and the Supreme Court refused even to hear it.

“With all due respect to CAA[sic],” Appeals Court Judge D. Michael Swiney wrote in his opinion on Friedman’s case, “this Court is at a loss as to how operating a state prison could be considered anything less than a governmental function.”

So eventually CCA will have to surrender at least some of the records, although there is still haggling in court over which exceptions CCA can use for which records. (And there’s always the old “we didn’t keep them that long” trick.)

The Tennessee Supreme Court had already ruled about government contractors:

“When a private entity’s relationship with the government is so extensive that the entity serves as the functional equivalent of a governmental agency, the accountability created by public oversight should be preserved.”

I wonder if Georgia will accept a Tennessee precedent?