Getting an earful across the state about that proposed solar rate hike: Georgia Power and the Georgia Public Service Commission, first in Savannah, then in Columbus.

At a public hearing in the auditorium of the Coca-Cola Space Science Center, Eaton heard several audience members call the rate hike “bad business practice” and “unconscionable,” while calling the solar proposal “a step backward” and a “disincentive” for modern, clean technology.

At issue is a two-pronged proposal before the PSC. Georgia Power is asking the commissioners to approve a $482 million rate hike that would add almost $100 a year to average residential electric bills, said Seth Gunning, an organizer for the Sierra Club of Georgia, one of the meeting’s sponsors. It [Georgia Power] is also asking the PSC to allow it to levy a fee on those who install solar panels on their homes or businesses.

The story continues with END_OF_DOCUMENT_TOKEN_TO_BE_REPLACED

Georgia Sierra Club’s Seth Gunning batted away Georgia Power’s proposed solar tax, which would charge about $22 a month for many new home solar installations. GA PSC needs to call Georgia Power’s proposal out, because it was a bad idea when Dominion Power did it in Virginia, and it would be a worse idea here in sunny Georgia. Besides, Austin Energy already established that the purported basis for such a solar tax is nonsense: actually, utilities should be paying more for home solar power because of the benefits they receive.

The company is proposing an average tariff of about $22 per month for new home solar systems that aren’t a part of Georgia Power-sponsored solar initiatives.

Company officials argue the tariff is necessary because most solar users still require the power grid as a back-up when the sun isn’t shining. As solar use spreads, the company stands to collect less revenue from those customers. What doesn’t change is the cost to maintain the grid. Georgia Power says non-solar customers shouldn’t have to bear all the costs.

“We don’t want to contribute to the problem of shifting costs so before we do that we very much prefer to get these tariffs right so all customers benefit,” said Roberts.

PSC Chairman Chuck Eaton wondered if the tariff is about making up for lost revenue, why not consider new fees for any number of energy efficiency measures. END_OF_DOCUMENT_TOKEN_TO_BE_REPLACED

Dirty Coal is Out, Help Usher Clean Energy In! 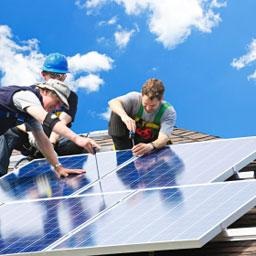 Now, we must send a clear message to Georgia Power’s leadership that we want to keep Georgia Jobs by investing in homegrown clean energy and energy efficiency to power our homes and businesses.

Send a message to Georgia Power CEO Paul Bowers telling him to replace dirty coal with investments in homegrown clean energy and energy efficiency that can produce thousands of lasting Georgia jobs.

END_OF_DOCUMENT_TOKEN_TO_BE_REPLACED At yesterday’s wind rally on Tybee Island, one spoke about passing the Production Tax Credit for wind jobs in Georgia.

Seth Gunning from Atlanta spoke at the Southern Company (SO) meeting 23 May 2012 at Callaway Gardens; he was representing the Georgia Sierra Club with 97 shares. SO CEO Thomas A. Fanning graciously greeted him. Gunning brought up health effects of coal plants. Then he talked about two paths.

He thanked SO for recently partnering with Santee Cooper in the Palmetto Wind Project in South Carolina. It’s curious how there’s been no news whatever about that.

Then Gunning mentioned another wind project:

The state of Georgia is the only Atlantic state not currently working with the Department of Interior to streamline the permitting processes for offshore wind development.

He was referring to the Atlantic Offshore Wind Energy Consortium announced by DoI 8 June 2010. (Not to be confused with Google’s privately-funded Atlantic Wind Connection.) Gunning asked whether the Southern Company would advocate END_OF_DOCUMENT_TOKEN_TO_BE_REPLACED

Nuclear is our only emissionless technology, said

Southern Company (SO) CEO Thomas A. Fanning. That would indicate that solar and wind have emissions. I assume he just mis-spoke in his otherwise masterful responses (often not answers) to shareholder questions.

Slides and sound for CEO Fanning’s main presentation are available on SO’s website. He indicated SO is unmatched in a combination of financial aspects, including dividends that have steadily increased year after year, and especially investment stability. He neglected to mention that much of those dividends are made possible by Georgia Power’s guaranteed profit margins. He did find time to oppose big government regulation, which is ironic, since Southern Company is a big beneficiary of Georgia’s numerous regulations benefitting Georgia Power. He also bragged about the Georgia legislature passing the “Energy Rate Increases to Finance Nuclear Power Plant Construction”.

During the Q&A session, I congratulated CEO Fanning on his 62% compensation raise last year, and noted that Georgia Power customers also got a raise, END_OF_DOCUMENT_TOKEN_TO_BE_REPLACED This comment by Seth Gunning came in on the backfire effect and how to leapfrog it. -jsq

Great article John. Thanks for turning me onto the research presented here, I’ll be looking into and using it. I’d also suggest a book called “Breakthrough: from the death of environmentalism to the politics of possibility”. I think you will love it.

Beyond changing the messaging on signs, which I think is a great idea, I think what the research reflects is a fundamental change in the approach to the work.

A key to community organizing work, as opposed to activism,

END_OF_DOCUMENT_TOKEN_TO_BE_REPLACED
This is the text of Seth Gunning’s letter to the editor that the Valdosta Daily Times printed on 20 Dec 2010. Here’s video of the referenced air quality permit hearing. -jsq