If you have evidence against something that will harm public health or waste money, just tell everybody and they’ll understand and stop it, right? Nope, humans don’t work that way. More likely you’ll provoke the backfire effect, reinforcing beliefs in the bad information that caused the problem in the first place. Here are some ways to jump over that effect to get at solutions to the problem.

Shankar Vedantam wrote in the Washington Post 15 Sep 2008 about The Power of Political Misinformation, illustrating with a couple of well-known examples of misinformation (you’ll recognize them), and continuing:

Nearly all these efforts rest on the assumption that good information is the antidote to misinformation.

But a series of new experiments show that misinformation can exercise a ghostly influence on people’s minds after it has been debunked — even among people who recognize it as misinformation.

Chris Mooney wrote more about why that is in Mother Jones 18 April 2011, The Science of Why We Don’t Believe Science: 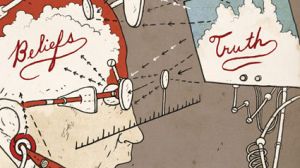 "A MAN WITH A CONVICTION is a hard man to change. Tell him you disagree and he turns away. Show him facts or figures and he questions your sources. Appeal to logic and he fails to see your point." So wrote the celebrated Stanford University psychologist Leon Festinger (PDF),

a passage that might have been referring to climate change denial—the persistent rejection, on the part of so many Americans today, of what we know about global warming and its human causes. But it was too early for that—this was the 1950s—and Festinger was actually describing a famous case study in psychology.

The difference is that Festinger investigated modern examples of the phenomenon with modern scientific techniques, for example infiltrating an end-of-the-world cult (is it May 21st yet?) and discovering that when the day came and the world didn’t end they just believed that their faith had postponed the end!

Mooney continues with even more modern experiments that demonstrate the phenomenon, and then spells out the backfire effect:

And that undercuts the standard notion that the way to persuade people is via evidence and argument. In fact, head-on attempts to persuade can sometimes trigger a backfire effect, where people not only fail to change their minds when confronted with the facts—they may hold their wrong views more tenaciously than ever.

I promised to spell this out: “Because if that is all, you are using their own framing, and reinforcing the biomass supporters in their own minds.”

Marching around with nothing but signs that say “No Biomass” just re-enforces in many peoples’ minds that biomass must be good. The VDT can editorialize about how people ought to stop thinking that it’s just a bunch of fringe people opposed to biomass, but the signs are a large part of why people believe that. I can spell out and show pictures over and over of black and white, old and young, academics and workers marching with those signs, but all a lot of people see are the signs.

Does that mean stop carrying those signs? No. But it would be more productive to add some other signs.

What are your values? Why do you care about biomass? It’s largely health, isn’t it? How about some signs that say Yes Clean Air! or Yes Healthy Children! or … you make some up.

How about go deeper? Why do people want the biomass plant, anyway? Because they want jobs for themselves and their children. Don’t we all want that? So why not talk about that?

What will provide more jobs? Even Sonny Murphy is promoting solar for jobs. Even Mr. formerly-Democratic-now-Republican state Senator Tim Golden is singing the praises of Jimmy Carter and Ted Turner and quoting Yogi Berra to say solar is good practice now. A recent Arizona State University study says Georgia is number 3 out of the top ten states that could benefit most by generating solar electricity, after only Arizona and Colorado. And south Georgia could generate so much power it could power itself and generate profit by exporting electricity to Atlanta! All with lots of jobs planning, installing, studying, etc.: jobs for construction workers, architects, and professors.

7 thoughts on “The backfire effect, and how to leapfrog it”