Some local communities are not waiting on Georgia Power or the Georgia legislature.

Solarize Tybee aims to allow more home and business owners than initially anticipated to tap into its collective buying power to reduce the cost of rooftop solar installations.

A Thursday meeting about the project attracted more END_OF_DOCUMENT_TOKEN_TO_BE_REPLACED 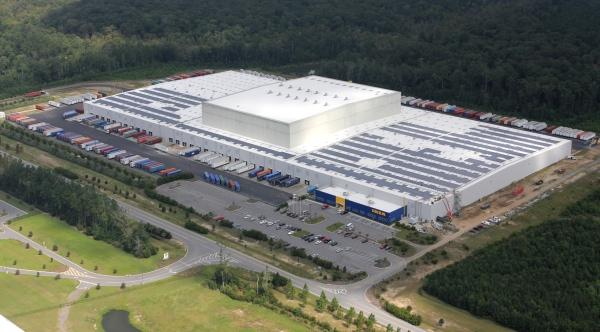 The biggest solar rooftop installation in Georgia? Not by mighty Georgia Power, not by an EMC, not even by GaSU: it’s IKEA’s distribution center in Chatham County. Chatham is also trailing only Atlanta in solar installations in general.

Just in time for the new year, and for a tax break for the old one, Consolidated Utilities began producing electricity from solar panels at its water treatment plant in west Chatham County on the afternoon of New Year’s Eve.

“When I left on Monday the meter was receiving power,” said Tony Abbott, president of Consolidated Utilities, a private local water company.

The 416-panel, 100-kilowatt system is big enough to power about 10 average homes for 25 years, said Julian Smith, of SolarSmith, which installed the system. At the water treatment site, however, solar will instead power the blowers that keep the sewage ponds aerated. The panels occupy previously useless property in a flood zone, Smith noted.

But what about IKEA?

Back in July I mentioned that IKEA was going to build that array, and IKEA was building almost as much solar as all of Georgia Power’s parent Southern Company. BusinessWire reported 9 Oct 2012 IKEA Plugs-In Georgia’s Largest Private Solar Rooftop Array on Savannah Distribution Center: Surpasses 75% U.S. Solar Presence.

This installation represents the 34th completed solar project for IKEA in the U.S., with five more locations underway, making the eventual U.S. solar presence of IKEA nearly 89% of its U.S. locations, generating with a total 38 MW. IKEA owns and operates each of its solar PV energy systems atop its buildings — as opposed to a solar lease or PPA (power purchase agreement) — and globally has allocated €590 million to invest in renewable energy, focusing on solar and wind during the coming three years. This investment reinforces the long-term commitment of IKEA to sustainability and confidence in photovoltaic (PV) technology. More than 250,000 solar panels have been installed on IKEA stores and buildings across the world. The company also owns and/or operates approximately 110 wind turbines in Europe.

The Savannahnow article mentions something happening in Chatham County but not so much yet in Lowndes County:

“What’s really going on in Chatham is that lots of homeowners put solar on their rooftops,” Arora said. “The excitement exists in Chatham for solar.”

Here are videos of Saturday’s Solar Energy Forum at the Center for a Sustainable Coast (CSC) in Savannah, with

We will probably post more later on the presentations by Paul Wolff and Robert Green, and the ensuing questions and answers. Meanwhile, here’s a video playlist of the entire event:

Savannah and Jacksonville are among the east coast cities most vulnerable to rising sea levels due to climate change, a study finds. Savannah, Georgia’s main seaport, with storm surges, hurricanes, and waves on top: what will that look like?

A study published last March by Climate Central found sea-level rise due to global warming had already doubled the risk of extreme flood events — so-called once in a century floods — for dozens of locations up and down the Atlantic and Pacific coasts.

It singled out the California cities of Los Angeles and San Diego on the Pacific coast and Jacksonville, Florida, and Savannah, Georgia, on the Atlantic, as the most vulnerable to historic flooding due to sea-level rise.

Sandy, which produced a 9ft storm surge at Battery Park in New York City, produced one example of the dangerous combination of storm surges and rising sea level. In New York, each additional foot of water puts up to 100,000 additional people at risk, according to a map published with the study.

That study projected 6 inches rise at Fort Pulaski by 2030 (minimum 3 inches) and 13 inches by 2050 (maximum 24 inches). But projections have gotten worse since then:

The latest research, published on Wednesday in Environmental Research Letters, found global sea-levels rising at a rate of 3.2mm a year, compared to the best estimates by the IPCC of 2mm a year, or 60% faster.

Add to a higher base sea level bigger storms like Hurricane Sandy, and Savannah and Jacksonville have a problem. Sure, Savannah is END_OF_DOCUMENT_TOKEN_TO_BE_REPLACED

Some of an animal shelter story coming out in Chatham County sounds familiar.

The county-funded Savannah Chatham Animal Control Shelter was found to have repeatedly violated animal protection requirements in two state inspections last month, and its practices are being criticized as inhumane by four local animal professionals.

One professional criticized the shelter not only in writing, but also by revoking the shelter’s permission to use her veterinary license. The Chatham County Commission says it’s dealt with the problem. We’ll see. At yesterday’s wind rally on Tybee Island, one spoke about passing the Production Tax Credit for wind jobs in Georgia. Paul Wolff said we have a potential for 14.5 gigawatts off the Georgia coast, without interfering with shipping lanes or the ocean ecology. He noted big wind turbines need everything down to ball bearings, much of which can be (and some already is) produced in Georgia. LAKE blog readers know Paul Wolff as somebody who has put his money where his mouth is, with solar on his roof.

Here’s the video. Also PR from SACE and a facebook event.

Chatham County and its cities appears to be the future of Lowndes County and our cities. On LOST negotiations, Chatham got tired of listening to the cities and called in the mediator.

With a month of negotiations still remaining, Chatham County has given up on working solely with the eight municipalities to determine how an estimated $600 million in Local Option Sales Tax revenue should be split up during the next 10 years.

Chatham County Chairman Pete Liakakis requested Tuesday night that a third party be brought in immediately to help determine distributions, instead of waiting the full 60 days available to reach an agreement before mediation is required.

“I believe the parties are so far apart, that the current process is at an impasse,” Liakakis said.

Liakakis said a proposal presented by the cities two weeks ago that would lower the county's share by about 7 percent while boosting the municipalities' portion was flawed because it is built around the concept that the county's share should be based on the residents living outside city limits.

“It ignores the fact that the county provides services to all citizens of the county,” he said.

Paul Wolff showed us his solar panels on Tybee Island:

And another thing I tell people if your roof is at all questionable… right now there’s a 30% federal tax credit on the materials for an EnergyStar roof….

Savannah, Ga.— The Coastal Group Sierra Club is sponsoring a presentation by Dr. Sydney Smith, owner of a solar farm in Bulloch County and co-founder of Lower Rates for Customers, which is currently providing solar power to a business in Savannah and looking to expand, selling its solar power below Georgia Power’s rates.

Although Georgia’s solar potential is enormous, Georgia is one of four states that does not allow energy to be purchased from private suppliers. Learn how Smith is challenging the law and Georgia Power to pave the way for lower rates and green energy.

The presentation begins at 7 p.m., Thursday, April 19 at the First Presbyterian Church, 520 Washington Ave., in Savannah.