Solar and wind energy technology is increasingly being deployed END_OF_DOCUMENT_TOKEN_TO_BE_REPLACED

As long as there are nukes or coal plants, there’s too much capacity. European utilities need to get on with things like END_OF_DOCUMENT_TOKEN_TO_BE_REPLACED

Some of the “stuff” that happened before and after GA PSC Tim Echols cheered nuclear Friday.

Just when we thought nuclear power might be on a comeback, well, stuff happened. Only time will tell if Georgia and South Carolina can “jump-start” a nuclear renaissance. Let’s hope we can, because low-cost base-load energy — the amount of electricity available 24 hours a day — is a key to economic growth. Now to the problem with two well-known solutions: END_OF_DOCUMENT_TOKEN_TO_BE_REPLACED

Re-evaluate Plant Vogtle, especially its water use, and move to efficiency, wind, and solar power instead, said

She reminded GA PSC Plant Vogtle 3 and 4 are late and over budget, and then:

I want to add my voice to the chorus of folks here who are concerned about water issues. 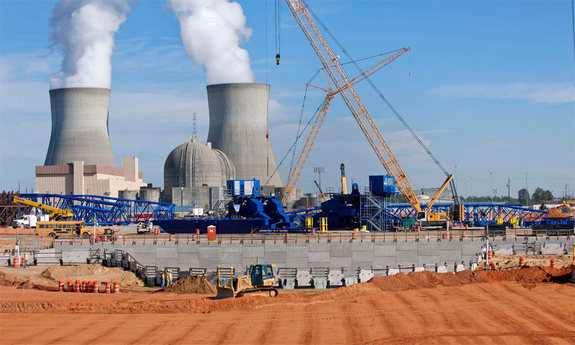 We know that Vogtle 3 and 4 will require an additional withdrawal of as much as 74 million gallons a day from the Savannah River and most of that water will not be returned. We know that the central Savannah River area where Vogtle is located is already very prone to droughts and the plant has been close to shutting down several times due to drought conditions.

Georgia is also already struggling to supply enough water for our homes, businesses, industries, and farms.

In addition, the Savannah River is END_OF_DOCUMENT_TOKEN_TO_BE_REPLACED

A German national residing in Georgia asked for a serious effort on energy efficiency and conservation while switching to real renewable energy sources instead of fossil fuels and nuclear, at the Georgia Public Service Commission meeting Tuesday 18 June 2013.

She said increasing fires and floods were part of climate change, and we need to do something about it.

I always hear this phrase “growing energy demand” as if it’s something, some matter of fact. A growing economy means growing energy demand, and that means consequently growing waste, growing pollution, growing inequity, and so on. Any thinking person should notice that we need to find a way out. For anyone concerned about our future, business as usual is no longer acceptable. We need drastic changes in our energy supply. We need to use less.

To us, growing the economy is how we’re going to make profit.

Yet GA PSC could do something about that antique attitude, as this speaker pointed out: END_OF_DOCUMENT_TOKEN_TO_BE_REPLACED While I applaud the Southern Company’s baby steps END_OF_DOCUMENT_TOKEN_TO_BE_REPLACED

Another problem with Vogtle END_OF_DOCUMENT_TOKEN_TO_BE_REPLACED