Re-Activation Meeting for the
Valdosta Chapter 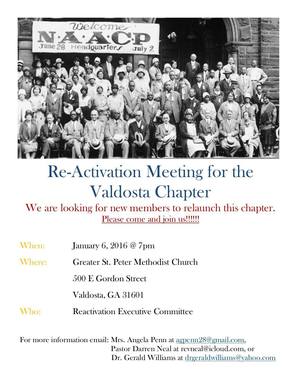 We are looking for new members to relaunch this chapter.
Please come and join us!!!!!!

Join the motorcade from the private prison site to honk at Valdosta City Hall and march at the Industrial Authority office.

Here’s the case against a private prison: END_OF_DOCUMENT_TOKEN_TO_BE_REPLACED

What do the American Federation of State, County and Municipal Employees, The Sentencing Project, the NAACP, and the Southern Poverty Law Center have in common? They all want states to reject CCA’s offer to 48 states to buy prisons. Right here in Lowndes County, our Industrial Authority wants to go one better for CCA and help build a shiny fresh new private prison with our tax dollars.

The American Civil Liberties Union and a broad coalition of 60 policy and religious groups today urged states to reject a recent offer by the nation’s largest private prison company to buy and privatize state prisons.

In a letter sent to governors in every state, the ACLU and 26 other organizations said a recent offer by Corrections Corporation of America (CCA) to buy prisons currently run by state officials is a backdoor invitation to take on additional debt while increasing CCA’s profits and impeding the serious criminal justice reforms needed to combat the nation’s mass incarceration crisis.

Two similar letters are also being sent today by religious coalitions to governors. One of the letters, sent by 32 faith groups including the United Methodist Church General Board of Church and Society, the United Church of Christ/Justice and Witness Ministries, the Episcopal Church and the Presbyterian Church (U.S.A.) Office of Public Witness, says there is a moral imperative in reducing incarceration through evidence-based alternatives to imprisonment and re-entry policies that ease the transition of prisoners back into society. A third letter, from the Presbyterian Criminal Justice Network, argues that the principles of mercy, forgiveness, redemption and reconciliation are largely absent from the private prison industry.

“Selling off prisons to CCA would be a tragic mistake for your state,” the ACLU’s letter reads. “[CCA’s] proposal is an invitation to fiscal irresponsibility, prisoner abuse and decreased public safety. It should be promptly declined.”

You can help decline CCA’s private prison in Lowndes County. Sam Allen summed it up before the march:

CUEE you have done what you tried to do.
You have brought us together.
United we stand. 
CUEE you have done what you tried to do —Sam Allen
No school consolidation,
Vote No for Consolidation March, Friends of Valdosta City Schools (FVCS),
Valdosta, Lowndes County, Georgia, 22 October 2011.
Videos by Gretchen Quarterman and John S. Quarterman for LAKE, the Lowndes Area Knowledge Exchange.

What are we gonna do?
Vote!
How we gonna vote?
No! END_OF_DOCUMENT_TOKEN_TO_BE_REPLACED
Private prison company CCA, which in conjunction with ALEC promotes laws in dozens of states and nationally that lock up more people for CCA’s private profit at taxpayer expense, really doesn’t like community opposition to siting private prisons in their communities. Hm, why would CCA hate community opposition so much, unless it works?

Well-funded? Har! OK, not this blog. That plus we provide evidence, like END_OF_DOCUMENT_TOKEN_TO_BE_REPLACED
I hate to repeat a preacher, but it’s Sunday, and Robert Rooks wrote for NAACP 24 August 2011 U.S. Approach to War on Drugs Ignores Dr. King’s Lessons on Justice, Compassion.

After forty years of the war on drugs, America continues to have laws that stratify society based on race and class and continues to ignore Dr. King’s lessons on justice, compassion and love.

My favorite quote from Dr. King speaks to the heart of the problem with America’s criminal justice system. “Power without love is reckless and abusive, and love without power is sentimental and anemic. Power at its best is love implementing the demands of justice, and justice at its best is power correcting everything that stands against love.”

America’s criminal justice system is reckless and discriminate. America has five percent of the world’s population but 25 percent of the world’s prisoners. Blacks are incarcerated at four to five times the rate of whites for drug crimes, even though the majority of those who use and sell drugs are white. The majority of those incarcerated are people who have a history with mental health and substance abuse.

Not only does incarceration impact individuals but it undermines families,

END_OF_DOCUMENT_TOKEN_TO_BE_REPLACED
Why does it matter that the NAACP wants an end to the War on Drugs?

Here’s why this matters. Or, more to the point, why it matters more than if such a statement came from Jesse Jackson or Al Sharpton. The NAACP is not just the nation’s oldest and largest civil rights organization. It is also its most conservative.

…denoting a propensity toward caution and a distrust of the bold, the risky, the new. And that’s the NAACP all over.

…there has always been something determinedly middle class and cautious about the NAACP. This is the group whose then-leader, Roy Wilkins, famously detested Martin Luther King for his street theatrics.

For that group, then, to demand an end to the Drug War represents a monumental sea change.

If you grew up at the same time that I did, you’ll remember the “Just Say No” anti-drug campaign that became popular in the mid-1980s and early 1990s.

It manifested itself in many ways, from the posters and talks in class to the “very special episodes” of shows such as “Blossom” and “The Facts of Life,” where a character encounters a kid from the wrong side of the tracks who is pressuring him or her to try drugs. Inevitably, good prevailed and the druggie turned out to be from a broken family and needed only a good face-to-face with Nancy Reagan, the driving force behind the campaign, to overcome his addiction. (She appeared on “Diff’rent Strokes,” and considering the real-life histories of Gary Coleman, Todd Bridges and Dana Plato, she probably should have stuck around for a five-episode story arc.)

“Just Say No” was part of the larger war on drugs the Nixon administration declared in 1971. For grown-ups, that war symbolized a lot more than sappy primetime television. Especially for black adults. For them, it meant stricter laws for those found buying, selling and distributing illegal drugs.

To that end, the NAACP took an interesting step at its national convention last month. It approved a resolution to end the war on drugs because of its devastating effect on the black community.

Interesting how the headline writer watered that down: NAACP called END_OF_DOCUMENT_TOKEN_TO_BE_REPLACED