Instead of even considering oil drilling off the Atlantic coast, which is massively opposed by coastal communities, how about get on with offshore wind turbines?

They’re no harder to build than deep-sea oil rigs, and if a hurricane blows them over, they don’t leak oil, like BP did into the Gulf, which will never be cleaned up, anymore than the Exxon Valdes disaster in Alaska. Japan is already doing it, in waters with typhoons just as strong as Atlantic hurricanes. Wind is clean, just what we need! 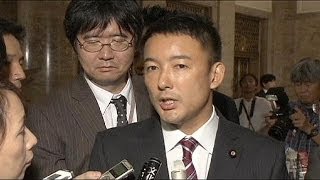 Movie actor Taro Yamamoto, who broke a taboo when he spoke out about Fukushima, and another when he was elected to the Japanese upper house in July, yesterday broke an even bigger one when he personally presented a request to Emperor Akihito about the health effects of the disaster at nuclear Fukushima Dai-Ichi. Some reaction in Japan was negative, because the Emperor supposedly plays only a symbolic role. However, Yamamoto’s request worked very well as PR, getting massive worldwide publicity. 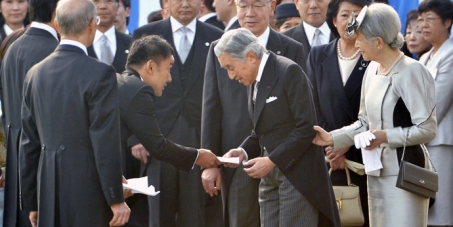 Here is a petition to the Japanese Diet to support Taro Yamamoto’s action. Let’s not forget that Plant Hatch on the Altamaha River is the same design as Fukushima.

END_OF_DOCUMENT_TOKEN_TO_BE_REPLACED And “Atoms for Peace” was part of an organized government PR campaign (“Operation Candor”) about Soviet nuclear weapons; see http://www.eisenhower.archives.gov/research/online_documents/atoms_for_peace.html”>Dwight D. Eisenhower Presidential Library for sources. Operation Candor was replaced by Operation Soothing Syrup (I am not making this up), according to END_OF_DOCUMENT_TOKEN_TO_BE_REPLACED Too bad they didn’t test picking political candidates to elect. Apparently at least a minority of U.S. adults failed that, too. I would quote from the actual test, but this is what we find at ncs.ed.gov today: END_OF_DOCUMENT_TOKEN_TO_BE_REPLACED

Current PM Shinzo Abe was his chosen successor, and now Junichiro Koizumi (prime minister 2001-2006) calls on Abe to end nukes in Japan. Why? “A large majority of the population now understands that nuclear energy is the most expensive form of power generation.” For sure here in Georgia, with Georgia Power charging through the nose for power customers aren’t even receiving while trying to hike the price of solar power, too. Let’s end Plant Vogtle and get on with renewable solar inland and wind off the coast.

Wolf Richter wrote for Zerohedge 4 October 2013, The End Of Nuclear Energy In Japan?

And on August 26, his words made it into the Mainichi Shimbun. If he were an active politician, he’d want “to convince lawmakers to move in the direction of zero nuclear plants,” he said. Now would be the ideal time to move that direction. All 50 nuclear reactors were off line. All opposition parties favored zero nuclear power. It could be done “as long as the prime minister made the decision” — putting the onus squarely on his former protégé. And nuclear politics in Japan haven’t been the same since.

The next blast came on September 24 at a forum in Tokyo. He talked about his trip to Finland in August. The purpose was to inspect the Onkalo spent-fuel repository. He was accompanied by END_OF_DOCUMENT_TOKEN_TO_BE_REPLACED

How is our local landfill like Fukushima? No, not radiation: nobody seems to be responsible.

Colin P. A. Jones wrote for The Japan Times 16 September 2013, Fukushima and the right to responsible government,

Rather, the means of holding a member responsible for bad judgments are internalized as part of the rules and discipline governing the hierarchy to which they belong, with mechanisms for outsiders to assert responsibility — to assert rights — being minimized and neutralized whenever possible.

Sure, it’s not exactly the same. Our local governments live in fear they’ll get sued (or so they claim), and even sheriffs and judges occasionally get convicted around here. But it’s quite difficult to get local elected officials to take their responsibility to the people as seriously as “we’ve invested too much in that to stop now” where “we” means the local government or more frequently a developer.

And privatizing the landfills and now trash collection is not that dissimilar to the Japanese government keeping TEPCO afloat so they have an unaccountable scapegoat for Fukushima. Locally, nobody seems to even know, much less care, that the landfill is END_OF_DOCUMENT_TOKEN_TO_BE_REPLACED

After Fukushima, Japan is now serious about solar power. From Miyama, Fukuoka (pictured), in the south of Honshu to northerly Hokkaido, Japan is building solar power plants, and now needs to upgrade its grid. Rooftop solar doesn’t need as many grid changes, since it delivers onsite at peak load. Hey, here’s an idea: solar panels on unused industrial park areas!

A new renewable energy incentive program has Japan on track to become the world’s leading market for solar energy, leaping past China and Germany, with Hokkaido at the forefront of the sun power rush. In a densely populated nation hungry for alternative energy, Hokkaido is an obvious choice to host projects, because of the availability of relatively large patches of inexpensive land. Unused industrial park areas, idle land inside a motor race circuit, a former horse ranch—all are being converted to solar farms. (See related, ” Pictures: A New Hub for Solar Tech Blooms in Japan .”)

But there’s a problem with this boom in Japan’s north. Although one-quarter of the largest solar projects approved under Japan’s new renewables policy are located in Hokkaido, the island accounts for less than 3 percent of the nation’s electricity demand. Experts say Japan will need to act quickly to make sure the power generated in Hokkaido flows to where it is needed. And that means modernizing a grid that currently doesn’t have capacity for all the projects proposed, installing a giant battery—planned to be the world’s largest—to store power when the sun isn’t shining, and ensuring connections so power can flow across the island nation. (See related, ” In Japan, Solar Panels Aid in Tsunami Rebuilding .”)

Japan historically has had no fossil energy sources of its own; it powered much of its economic growth over the past few generations with homegrown nuclear energy. At the start of 2011, more than 50 reactors provided Japan with 30 percent of its electricity, and the plan was to increase that share to 50 percent. That scenario was upended on March 11, 2011, when the most powerful earthquake ever to shake Japan touched off a tsunami that breached the defenses of Fukushima Daiichi nuclear power plant on the east coast. (See related, ” One Year After Fukushima, Japan Faces Shortages of Energy, Trust .”) And it stayed down from May 6th to June 17th 2013. Plus who knows what it’s leaking now that they didn’t bother to take it down for? END_OF_DOCUMENT_TOKEN_TO_BE_REPLACED