If Georgia Power stonewalls on cost overruns, will it lose at least one Commissioner this time?

Long-time nuclear supporter Tim Echols suggested at the hearings this morning that cost overruns at nuclear Plant Vogtle should be capped like Southern Company was forced to do for Kemper Coal by the Mississippi PSC. Standard & Poor’s already downgraded SO because of Kemper Coal and two analysts have downgraded SO for sticking to coal and nukes instead of doing more solar and wind. If SO’s majority part Georgia Power loses the GA PSC, it could be curtains for Plant Vogtle’s new nukes.

Southern Co. subsidiary Georgia Power has asked to raise the budget for its share of massive project by $737 million to roughly $6.85 billion.

Public Service Commission Tim Echols asked whether the firm has considered offering a deal like one it reached in Mississippi over a separate plant that also proved expensive to build. The company has absorbed $540 million in losses in Mississippi and could face more.

Remember, Tim Echols has for two years now been one of GA PSC’s staunchest supporters of solar power. Back in March, the same Commissioner said about Plant Vogtle, according to Hope Jensen for WRDW 15 March 2013,

“The questions is: ‘Is this still the best deal for our people?'” said Echols, and he says from what he’s seen, the answer is yes. “Even with this cost increase, [it’s] still $4 billion cheaper to operate this plant than the next best thing, which would be natural gas.”

How long will it take Tim Echols to realize natural gas isn’t the next best thing? Solar power is a better thing than than either nukes or gas: cheaper to build, and far cheaper to operate, because solar requires no fuel. Natural gas is a backup for solar and wind. 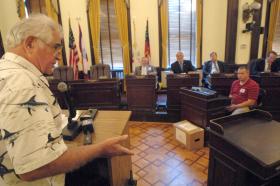 Last fall we saw Fitch reaffirm SO’s ratings the day after GA PSC rubberstamped Vogtle cost overruns. Looks to me like GA PSC breaking that rubber stamp could stop the flow of other people’s money into Plant Vogtle. …why are you gambling the company’s future and the health of their environment and their citizens on antiquated, dangerous and very expensive nuclear energy, when the Southeast is an untapped gold mine of safe, clean and cheap solar energy. If Germany — which is a much colder country — can meet half of their energy needs from solar in just a few years, why can’t Georgia?

Dear Tim Echols and GA PSC: now that you have affirmed a week ago that solar is viable in Georgia, isn’t it time to stop the Vogtle boondoggle and get on with clean sun and wind power?