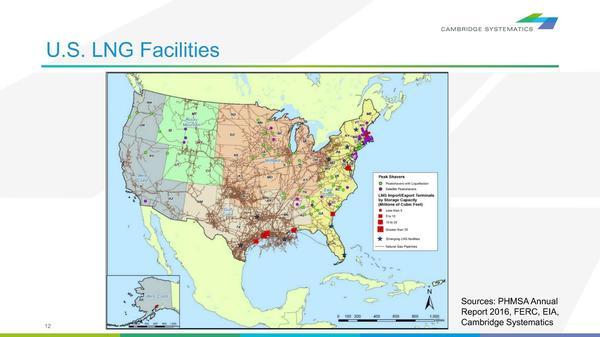 And look on slide 9: 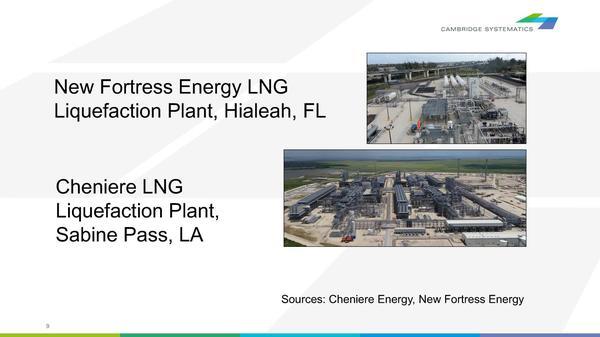 That’s right, the only LNG export operation in Florida actually exporting, New Fortress Energy’s Hialeah LNG, exporting through Port of Miami and maybe other ports, is featured first. (Exports by Crowley Maritime from Jacksonville, including of gas trucked down I-75 and I-10 through Georgia and Florida, apparently thus far only go to Puerto Rico; see LNG Monthly (YTD – through October 2018, U.S. DoE Office of Fossil Energy.) 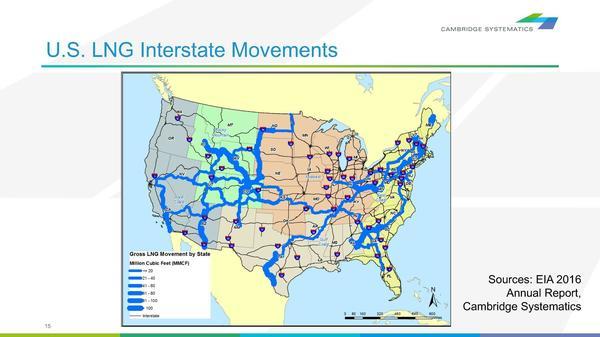 Here’s detail of the U.S. Southeast: 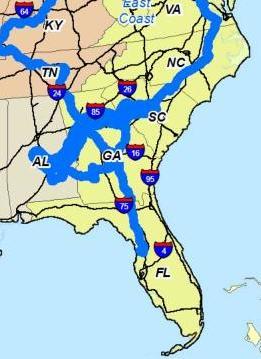 Trucking down I-75 to Florida from Pivotal LNG’s operations is shown, but in Florida apparently Cambridge Systematics missed the turn onto I-10 to Jacksonville, instead going on down I-75 to Crystal River. Maybe they were confused by Strom LNG’s authorized (but not yet built) LNG plant there, which actually proposes to export through Port of Tampa.

What’s missing from this assertion on slide 23:

Solar and wind power are growing far faster than natural gas, with solar doubling deployed capacity every two years, and wind not much slower. With batteries also coming along much sooner and cheaper than expected, fracked methane is a dead end. That’s why Ron Binz never got to be chair of the Federal Energy Regulatory Commission (FERC): he said that out loud back in 2013.

Nonetheless, “solar will overtake everything,”, as former FERC Chair Jon Wellinghoff said also in 2013. The prediction he made (and I made just before him) that solar power will provide more U.S. electricity than any other source by 2023 is still on track, according to FERC’s own figures. Yes, despite the recent back-peddling of the U.S. government.

Slide 13 on LNG Economics honestly lists first among Supply-Side Factors, Production amounts. That’s the glut of gas from fracking that is really driving this LNG export craze. It also lists Storage Levels, which is also a glut of gas. 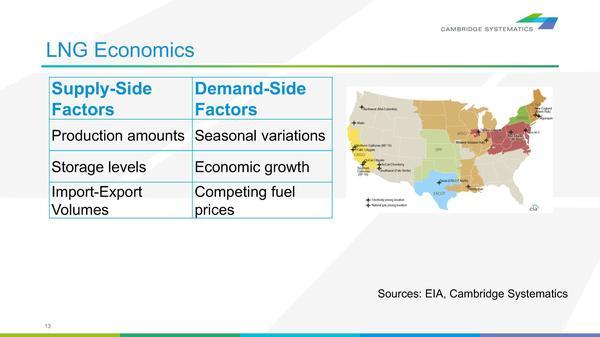 Third that slide lists Import-Export Volumes. Well, that requires countries to export to. Which isn’t really happening even with the U.S. pushing for it. Merkel’s Natural Gas Bridge Looks Like a Dead End to Executives: Investment in gas plants dries up as Merkel’s support fades; Gas-fired plants generate about 10 percent of nation’s power, by Brian Parkin, Anna Shiryaevskaya, and William Wilkes, Bloomberg, July 19, 2018.

Power companies need to come up with new ways to ensure electricity as coal plants retire and more consumers adopt energy storage to balance against volatile wind and solar generation….

As Merkel’s new coalition has pledged a speedier switch to wind and solar, pushing the share of clean power to 65 percent of total generation by 2030, some utilities have been left wondering whether gas will be needed at all….

“Our view is we should carefully review whether it makes sense at all to phase out coal very fast, replace it by gas and then you have stranded gas investments after 10 years,” RWE Chief Financial Officer Markus Krebber said in an interview with Bloomberg News in June. “The future should be renewables and storage. We’re also preparing for that.”

Germany isn’t even listed on slide 10: 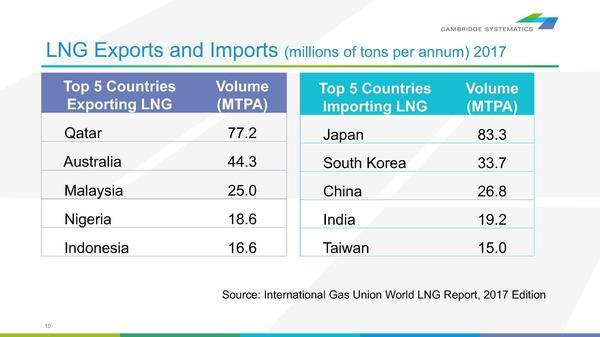 LNG Exports and Imports (millions of tons per annum) 2017
PDF

But investors in other countries aren’t stupid, either. They can see the bigger picture of economics, which plainly shows solar, wind, and storage have already won. Nobody wants to invest in fracked methane stranded assets.

Plus look at the “Top 5 Countries Exporting LNG” on that slide. Why should the U.S. turn itself into a developing country, exporting raw materials?

Have you ever heard of solar panels leaking or exploding?

Why should we take any risk for the dying industry of natural gas? 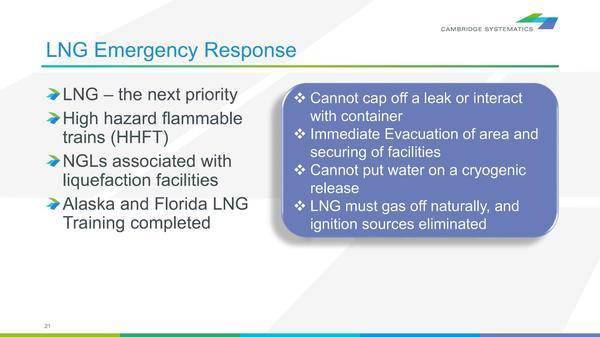 If that’s so, why does not Florida county Fire Rescue department seem to know about it? And what about Georgia? Meanwhile, there’s no need for solar panel emergency response training.

Especially why should we risk fracked methane profit through LNG export to other countries, for the profit of fossil fuel company executives and shareholders at our expense? As Thomas Edison said 82 years ago:

We don’t have to wait until then.

Real energy independence is solar power onshore, wind power offshore, with batteries and a smart grid. Let’s get on with it.

Even FERC’s rubberstamp is better than the time-constrained rubberstamp of the U.S. DoE Office of Fossil Fuels, which is where most of the LNG export operations in Georgia and Florida got their authorizations. You can help fund the WWALS lawsuit to stop FERC shirking its inland LNG export oversight duties.