Solar and wind energy technology is increasingly being deployed END_OF_DOCUMENT_TOKEN_TO_BE_REPLACED 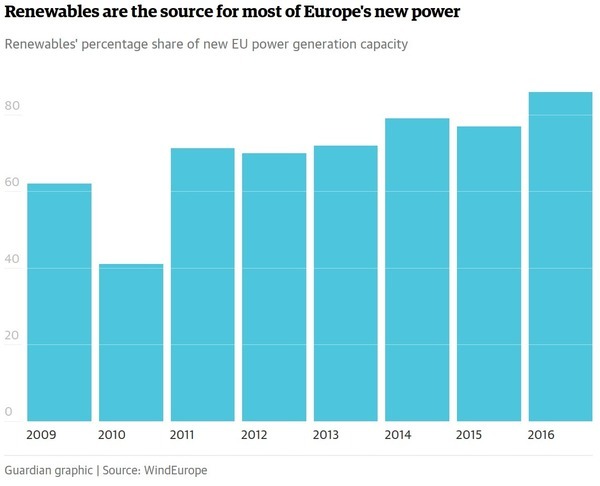 That’s an even higher proportion than the approximately 64% solar and wind percentage of new U.S. electric power in 2016.

END_OF_DOCUMENT_TOKEN_TO_BE_REPLACED As long as there are nukes or coal plants, there’s too much capacity. European utilities need to get on with things like END_OF_DOCUMENT_TOKEN_TO_BE_REPLACED

If Europe can deploy mostly solar and wind for new electricity, we can do the same here, especially in sunny south Georgia.

Stephen Lacey wrote for Climate Progress 12 Feb 2012, More than 68% of New European Electricity Capacity Came From Wind and Solar in 2011,

That’s almost a 10-fold increase over deployment in 2000, when only 3.5 GW of renewable energy projects were installed. Last year, 32 GW of renewables — mostly wind and solar — were deployed across European countries.

If Europe can change its energy strategy that quickly, so can we.

Far cleaner than conventional incinerators, this new type of plant converts local trash into heat and electricity. Dozens of filters catch pollutants, from mercury to dioxin, that would have emerged from its smokestack only a decade ago.

Denmark now has 29 such plants, serving 98 municipalities in a country of 5.5 million people, and 10 more are planned or under construction. Across Europe, there are about 400 plants, with Denmark, Germany and the Netherlands leading the pack in expanding them and building new ones.

By contrast, no new waste-to-energy plants are being planned or built in the United States, the Environmental Protection Agency says — even though the federal government and 24 states now classify waste that is burned this way for energy as a renewable fuel, in many cases eligible for subsidies. There are only 87 trash-burning power plants in the United States, a country of more than 300 million people, and almost all were built at least 15 years ago.

That means the biomass plant proposed for Valdosta is not that kind of clean incinerator.