Not as obvious as Entergy’s Indian Point fire, Southern Nuclear’s Farley 1 on the Chattahoochee River is down and Hatch 1 and 2 on the Altamaha River have ongoing fire safety problems. 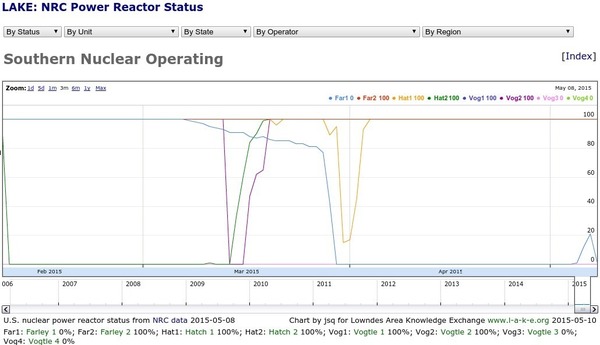 NRC Current Event Notification Report for May 8, 2015 says about Farley 1, near Dothan Alabama, on the Chattahoochee River, about 125 miles from here: END_OF_DOCUMENT_TOKEN_TO_BE_REPLACED

A fire and shut down of Indian Point 3 didn’t even make the front page of the New York Times, and no mention that Spectra Energy wants to build its 42-inch fracked methane Algonquin Incremental Market (AIM) only 1,500 feet from Indian Point. Plus an oil leak, all next to the Hudson River. Meanwhile, Oyster Creek (NJ), Three Mile Island 1 (PA), and Farley (AL) are all down, and numerous fire prevention deficiencies were reported for Hatch 1 and 2 (GA). When did you last hear of a solar leak or explosion?

Now that the NRC is back up, we can see all the nukes that went down during the government shutdown: nine of them. If they’re not safe to run without NRC looking over their shoulder, are they safe to run at all? And two came back up. Was that a prudent thing to do? Meanwhile, solar panels don’t need an NRC.

Entergy’s chronically faulty Pilgrim 1 was the last to fall during the shutdown, while Southern’s defect-shipped Farley 1 was one of the first: END_OF_DOCUMENT_TOKEN_TO_BE_REPLACED

As Entergy has been preparing to do for some time, it’s down forever for Vermont Yankee. That’s at least ten (10) down forever (Vermont Yankee, Kewaunee, Crystal River 3, San Onofre 2 and 3) or never to be built (Calvert Cliffs 3, South Texas Nuclear Project 3 and 4, Bellefonte, and Levy County) in the past year. How many will it take before Southern Company (or more likely GA PSC or even the Georgia legislature) realizes new nukes make no financial sense and terminates the Plant Vogtle 3 and 4 boondoggle on the Savannah River?

Entergy blamed Vermont Yankee on shale gas, but you ain’t seen nothing yet, as Moore’s Law for solar really kicks in. Next one to go: I say Entergy’s often-down Pilgrim 1 in Massachusetts; everything Entergy said about Vermont Yankee applies in spades to Pilgrim 1. Or maybe ten-times-down-this-year Palisades. Or bouncy man-killer Arkansas Nuclear One. So many to choose from!

Corporation ETR -0.21% today said it plans to close and decommission its Vermont Yankee Nuclear Power Station in Vernon, Vt. The station is expected to cease power production after its current fuel cycle and move to safe shutdown in the fourth quarter of 2014. The station will remain under the oversight of the Nuclear Regulatory Commission throughout the decommissioning process.

“This was an agonizing decision and END_OF_DOCUMENT_TOKEN_TO_BE_REPLACED Hm, “made compulsory” by whom? NRC? OSHA, which also investigated? Arkansas? Other? END_OF_DOCUMENT_TOKEN_TO_BE_REPLACED

Yes, and moving away from baseload coal, nukes, and natural gas and towards distributed solar and wind power will help with that, both directly by making the grid more resilient, and indirectly by slowing climate change.

Clare Foran wrote for NationalJournal 12 August 2013, Climate Change Is Threatening the Power Grid: So says the White House, in a new report that recommends strengthening the grid.

Just days away from the 10-year anniversary of the worst power outage in U.S. history, the White House and the Energy Department released a report on Monday evaluating the resiliency of the nation’s electric grid and recommending steps to prevent future blackouts.

The report called storms and severe weather “the leading cause of power outages in the United States,” and warned against the steep cost of weather-related damage to the electric grid. It put the price tag for electrical failures caused by inclement weather at between $18 billion and $33 billion annually, and noted that costs have increased in recent years, jumping from a range of $14 billion to $26 billion in 2003 to $27 billion to $52 billion in 2012. Storms exceeding a billion dollars in damages (electrical and otherwise) have also become more frequent in the past decade, as the chart below shows.

Well, Entergy’s Arkansas Nuclear 1 (ANO1) is still down more than four months after a fatal accident (hey, look at that; END_OF_DOCUMENT_TOKEN_TO_BE_REPLACED

The story says co-workers caught him (good for them): END_OF_DOCUMENT_TOKEN_TO_BE_REPLACED