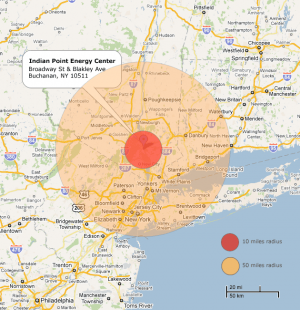 The story says co-workers caught him (good for them):

A few weeks later, in January and February of 2012, Wilson was questioned by other Indian Point employees while conducting a self-assessment in preparation for an NRC inspection. During the inspection preparations, workers had noted that no condition reports had been created after three tests had shown non-compliance and no additional steps had been taken to correct the problem. After the findings, Wilson logged into the company database under another employee’s name and fabricated test data for resample tests which were never actually taken. On February 6th, the defendant filed three falsified test results in the official plant record database which had purportedly been sampled within two weeks of the three samples which had been found in excess of federal regulations.

But the point remains: a single person at a nuclear plant can risk the lives of 50 million people. What was his excuse?

What actually happened at Indian Point was that for a matter of months, the nuclear power plant continued to operate in a condition where its diesel generators were not in technical compliance with NRC standards. Had the NRC known about the lack of compliance, the nuclear power station would have been forced to shut down due to the emergency diesel generators being inoperable until it was able to prove compliance, which would also incur operating expenses in excess of a million dollars per day — hence why Wilson told regulators that he had done what he felt was necessary to prevent Indian Point from shutting down. According to regulations, the Nuclear Regulatory Commission could fine the licensee $140,000 per day that the nuclear power plant operated while not in compliance with safety regulations (which according to the complaint Indian Point did for months without resolution), but no such penalty has been imposed by federal regulators at this time.

He wanted to save a few million dollars for his employer. At the risk of 50 million lives. Now that we have better ways to make electricity (solar and wind), why are we still operating these risky nuclear ventures? And why are we building more at Plant Vogtle on the Savannah River?