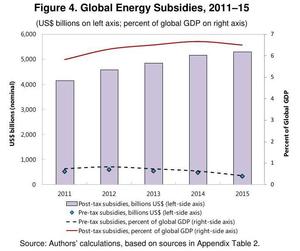 The vast sum is largely due to polluters not paying the costs imposed on governments by the burning of coal, oil and gas. These include END_OF_DOCUMENT_TOKEN_TO_BE_REPLACED

Fossil fuels get more than $70 billion dollars a year in U.S. government subsidies (tax breaks and direct spending), while solar and wind get only about $12 billion, so fossil fuels got more than five times as much, while nuclear got ten times as much (especially in Georgia). Even corn ethanol, that sounded-like-a-good-idea-at-the-time boondoggle, gets more subsidies than solar and wind put together.

That’s without even going into the externalities such as healthcare costs due to polution, environmental destruction through mountaintop removal for coal, tar sands oil drilling, and fracking for natural gas, and wars for oil and uranium.

END_OF_DOCUMENT_TOKEN_TO_BE_REPLACED

Georgia Power argued that a free market in solar power would cause price increases. Yet they already increased prices for natural gas and for nuclear plants that won’t produce electricity for years, if ever, and are already massively overbudget and behind schedule. Why should we believe them about solar when it’s their archaic projects they already are deploying that already have increased customer prices?

Another reason is that the customers of Georgia Power, Georgia’s

EMC’s and Municipal Electric Authority of Georgia are paying for the poles and wires to transmit power, and the back-up generation to cover the electricity needs when the sun isn’t shining. These costs will have to be recovered from other customers not getting the privileged deal from the developer, raising everyone else’s rates.

While there are already numerous federal and state tax and other incentives for solar development in Georgia, it is still much more costly than the service provided by utilities. But what if third-party solar developers could get other electric customers in Georgia to foot the bill? That would be the result of this legislation.

It’s like asking Sally’s Café to pay the electric bill of Joe’s Cafe across the street, thus allowing Joe to undercut Sally’s prices.

Georgia Power well knows they could take a percentage of any power transmitted through their lines, so that wires and poles and backup generation argument is ludicrous. And as far as subsidies, how about this one, Georgia Power, Get the Facts, Investing in Georgia’s Energy Future: END_OF_DOCUMENT_TOKEN_TO_BE_REPLACED

He said that until recently he had discounted solar, but now he had seen it. END_OF_DOCUMENT_TOKEN_TO_BE_REPLACED
After last night’s Valdosta City Council meeting, someone told me he thought all renewable energy sources required subsidies, and that was the problem. Well, I think the real problem is the much larger subsidies to big oil.

Despite astronomical profits during what have been lean years for most everyone else, the oil and gas industry continues to benefit from massive, multi-billion dollar taxpayer subsidies. Opinion polling shows the American public overwhelmingly wants those subsidies eliminated.

That’s at least $4 billion a year to big oil while Congress debates cutting Social Security and Medicare and maybe shutting down the government. According to the American Petroleum Institute (API), END_OF_DOCUMENT_TOKEN_TO_BE_REPLACED
Why do some people deny the overwhelming science of climate change in a time when the evidence and analysis is so thorough and so conclusive that no reputable scientific organization in the world doubts any longer that humans are changing the climate of the whole planet for the worse: because it threatens their political and economic beliefs. Naomi Klein: Why Climate Change Is So Threatening to Right-Wing Ideologues:

It’s like denying the earth goes around the sun. Why would they identify with such a silly thing? Because of what actually dealing with climate change would mean: END_OF_DOCUMENT_TOKEN_TO_BE_REPLACED
Money & Company reports on 30 Nov 2010 that Clean energy gets fewer subsidies, less investment than fossil fuels, report says: Energy from fossil fuel gets 12 times more in subsidies worldwide than sustainable energy, says a new report from the USC Marshall School of Business.

“Inertia in the form of myopia, misperception, and dulled motivation, at the economy, firm, and consumer levels creates resistance to change and constrains solution-seeking to incremental improvements of known technologies rather than disruptive breakthrough innovations needed,” they wrote in their executive summary.

The WSJ article about economic problems of biomass plants goes on to suggest the government subsidize biomass more. Clean Technica suggests a better idea: If solar got the same subsidies as fossil fuels, solar would be cheaper than current grid power everywhere in the U.S. Each taxpayer has spent about $521 towards coal over the past five years and only $7.24 towards solar. How about we reverse that?

Solar needs no fuel, no truck deliveries, and no emissions.