He said that until recently he had discounted solar, but now he had seen it.

Don Parsons, chair of the energy committee of the Georgia House of Representatives, wants to write an energy plan for Georgia. He remarked that he was not apologetic about still supporting coal. He says the legislature recently increased the amount of solar power Georgia Power has to buy back, but gapower told him that few people had signed up for that.

Later Parsons added that he had recently discovered that under Gov. Purdue GEFA was tasked with creating a Georgia Energy Plan. He said it was never updated, but at least it was started. 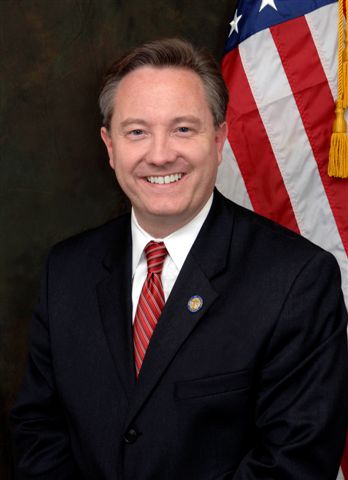 Doug Stoner, Georgia State Senator, suggests people be careful about terminology. Every form of energy has some form of subsidy. Even a public utility is a subsidy.

If you want everyone to be on the same level playing field, you need to understand what other players get as part of public policy.

He talked about why these policies developed, including electricity only went to cities and not rural areas, until the R.E.A. extended it. He says if you want to get away from having subsidies, you want to consider what subsidies your competitors are still getting. And make sure legislators understand that, too. Some long-term legislators may understand it, but there are a lot of newly elected legislators.

He also said Georgia had not gone after high-wage jobs. He thinks call centers are good, but not high-wage. Bring high-wage jobs, and you’ll also get all the service jobs you want.

This industry is definitely high-wage jobs, from the manufacturing, the installation, feeding power back into the grid; all the different aspects of his industry are good-paying jobs. That’s something legislators need to be hearing: that you are a high-wage job industry.

He agreed with Don Parsons about wanting a mixed portfolio of energy sources, including coal. He noted EPA was about to apply mercury standards that 40-50% of U.S. coal plants would not meet. That’s why there’s a push for natural gas and nuclear power. He said,

The sun’s been burning for about 5 billion years, and we’ve got about another 5 billion to go, so we won’t run out of solar power soon.

Government’s going to be involved in this. We will be setting the parameters. We do not have a free market in electrical generation.

It’s hard to come up with any issue that’s of more importance than energy.

He remarked that the AJC today had a story about solar

He wondered what the U.S. would do if the Arab Spring spread to Saudi Arabia, and he said it was sobering to consider what the probable answer was. Because of oil. Our lack of an energy policy, and our lack of a renewable energy policy is of critical importance. … It’s number one with respect to our domestic policy.

How many of you think gas prices will go up?

Almost everybody raised their hand.

How many of you think we’re going to run out of sun?

He claimed he saw one hand go up.

It is very difficult for me to understand why anyone as a policy maker is not behind this movement.

He acknowledged that some people had economic interests the other way.

He recommended moving away from push incentives to pull incentives, such as percentages of energy required to come from clean energy sources. He added later that renewable energies added energy independence, which was worth something in itself. And solar was the easiest sell on that, for example dormant rooftops could be used for solar, and there were a lot of ways to promote and develop these synergies.

Moderator Chuck Eaton asked if there was any movement in the legislature for a Renewable Portfolio Standard (RPS) such as many states including North Carolina had passed?

Don Parsons said there wasn’t, and he didn’t even know where anybody would get the data to see whether an RPS was being met (apparently he didn’t hear the NCSC presentation in which we learned that NC passed a law requiring the power companies to provide the data).

Doug Stoner said “we’re not going to be doing it next year,” partly because most of the legislature didn’t even know what that was. However, later he added that the Senate was quite interested in taking a serious look at a PPA. He even said he wished the major power companies were part of the solution. He said one way to get people to pay attention was to introduce legislation; that could get people at the table to have discussion.

Scott Holcomb said he reluctantly agreed that we wouldn’t see an RPS soon, because as Stoner said most there was a legislative education issue. Holcomb said he would support it.

Stoner added that talking about jobs would help educate the legislature.

“I just know that especially the younger people, the young lady I have working for me as an aide, they don’t look at this like older people do, they look further down the line. It’s not just about profits for the power company. We as legislators represent the people of the state. The profits of the power company are not as important to me as the citizens of my district and of the state.”

He said we needed to look beyond the power companies’ understandable focus on the bottom line, farther down the line, 100 years, 200 years. He said the industry knows it’s something he and the other panelists are serious about. He said he wasn’t going to back down on it.

Seems to me if he’s for coal he already backed down. But that he was on that panel at the Southern Solar Summit may indicate that he’s asking to be further educated.

Moderator Eaton added he used to not listen to solar advocates because they said it was the cheapest power. But he kept hearing more from more pragmatic proponents who talked about the things that needed to be done. He said he thinks there’s a way to do it to balance interests so we’re diversified.

Hm, so his interest in diversified energy sources is to “balance interests.”