In the five-minute Work Session yesterday morning, the few Commissioners who showed up breezed through everything with no discussion. Commissioners Scottie Orenstein and Clay Griner were absent, even though this is in their districts: 6.b. Adopt Resolution Accepting Infrastructure for Grove Pointe Phase V Sect 2. But of course it is expected that the Commission will approve that item this evening at 5:30 PM. County Manager Paige Dukes was also absent, in her case due to illness.

Below are links to each LAKE video of each agenda item, followed by a LAKE video playlist. There are no notes, because nothing happened worth commenting on. See also END_OF_DOCUMENT_TOKEN_TO_BE_REPLACED

The Lowndes County Commission continues to pretend that accepting streets for a subdivision won’t cost taxpayers anything in future maintenance, nor previously in running water and sewer there. Back in October 2019, when the county accepted infrastructure for Phase V, County Engineer Mike Fletcher said that was “the last phase of Grove Pointe”. Yet here we are with Adopt Resolution Accepting Infrastructure for Grove Pointe Phase V Section 2. 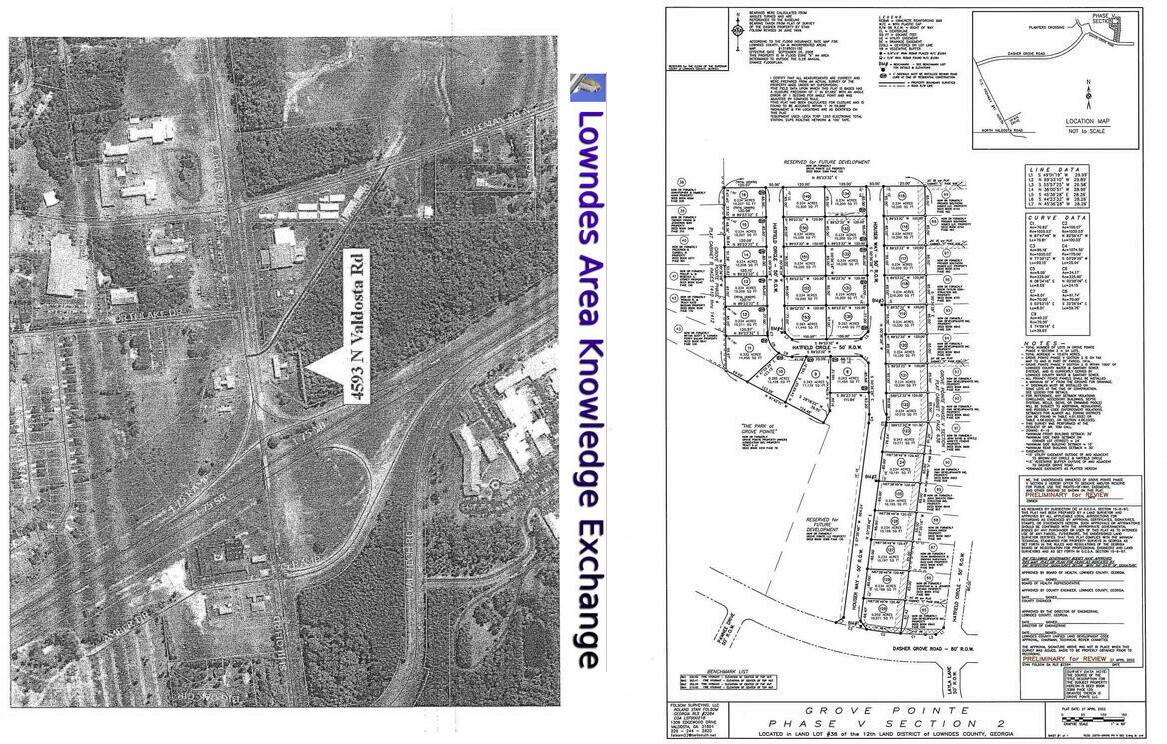 Connecting Grove Pointe to Val Del Road by the Nelson Hill subdivision was planned since at least 2006, and that’s why Simpson Lane and Clyattstone Road got paved. Despite all that, today’s Grove Pointe agenda item is marked “BUDGET IMPACT: N/A”.

Also on the agenda END_OF_DOCUMENT_TOKEN_TO_BE_REPLACED

This morning the Lowndes County Commission will discuss abandoning a driveway, er road, a couple of grants for legal purposes, relining a drinking water tank for a fancy subdivision, dump trucks for Public Works, and reappointing Michael Walker, Crawford Powell, and Scott Purvis to the Public Facilities Authority, plus a vacant seat. They will vote Tuesday evening at 5:30 PM.

What does PFA do?

Created via Resolution 05-1130, the general purpose of the authority is declared to be that of providing through the acquisition, construction, installation, renovation, expansion, modification or rehabilitation, any buildings, structure, facilities, improvements, furnishings, fixtures, machinery, equipment and services for the citizens in the county. Members are appointed to three year terms and meet as needed. For more information, contact the Office of the County Clerk, 229-671-2400, or email the County Clerk. 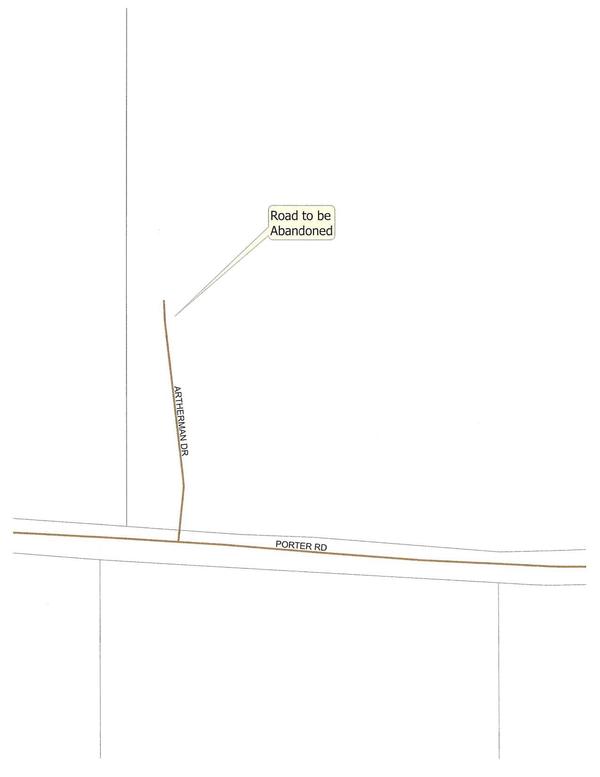 Map: Road to be Abandoned

How the Abandonment of Artherman Lane can be considered not to affect the budget is mysterious, since Public Works will no longer need to spend to maintain that driveway.

On the Solicitor-General's VOCA Continuation Grant, VOCA is the Victims of Crime Act. The $6,000 cost is health insurance premiums for the two Victim Advocates ($3,000 each).

On the Solicitor-General's Office 2021 VAWA Competitive Application, VAWA is the Violence Against Women Act. The $17,326 is for Cash Match, about $2,000 lower than last time. Lowndes County funnels grant money for five counties, by delegating the District Attorney (DA) to receive and distribute the funds.

Here is the agenda. The board packet is on the LAKE website due to a LAKE open records request. END_OF_DOCUMENT_TOKEN_TO_BE_REPLACED So which is it? END_OF_DOCUMENT_TOKEN_TO_BE_REPLACED

END_OF_DOCUMENT_TOKEN_TO_BE_REPLACED

the refinancing the county is bragging about to save a million dollars, and that they're going to vote on tonight at 5:30 PM, a memory ping reminded me that Hahira got a GEFA loan for $431,777 a water well this August, at zero percent interest during construction, and then 1% during the 20 year repayment period. Is the county's bond deal better than that?

GEFA is the Georgia Environmental Finance Authority, and it's not just Hahira that has gotten water project loans through GEFA. According to GEFA PR of 13 May 2011, GEFA Approves Environmental Infrastructure Projects Totaling $60.7 Million for Seven Georgia Communities, just this year others included "Cobb, Cook and Newton Counties; Cusseta-Chattahoochee County; and the cities of College Park, Ludowici and Valdosta."

The city of Valdosta was approved for a CWSRF loan of $18,500,000 to finance phase two of the Mud Creek Water Pollution Control Plant project, which includes increasing capacity from 3.2 million gallons per day (GPD) to 5.7 million GPD, and additional improvements and modifications to the facility. Valdosta will also design a new solids treatment system. The city of Valdosta will pay 3 percent interest on the 20-year loan for $18,500,000.

So why is the County of Lowndes having to float bonds? And are bonds on the commercial bond market really a better financial deal for the county?

For that matter, where's the public notice with agenda of the 4PM meeting today of the Lowndes County Public Facilities Authority?

A surprising amount of discussion at yesterday morning’s Lowndes County Commission Work Session, on ZBOA appointment, alcohol Sunday sales, rezoning next to Moody, and more. They said nothing about the solid waste ordinance, however; maybe they’ll table that loser again. They vote tonight:

Here’s a video playlist of the Work Session, followed by the agenda with the videos linked into it.

Here’s the agenda, this time with links to the videos and some notes.

END_OF_DOCUMENT_TOKEN_TO_BE_REPLACED

More than a million dollars will be saved by refinancing county bonds, the Chairman and staff indicated at yesterday morning’s Lowndes County Commission Work Session. Congratulations! But who is this shadowy Lowndes County Public Facilities Authority that is responsible for that?

County Manager Joe Pritchard said the county was refinancing two bond packages, for the Public Facilities Authority and for the Central Valdosta Development Authority. County Attorney Walter Elliott said the Public Facilities Authority was meeting 4PM tomorrow (now today 11 Dec 2012) to approve an ordinance similar to what the County Commission was being asked to approve Tuesday night. There’s also a purchase agreement with the underwriter, in the packet only the board gets to see. Chairman Ashley Paulk said he spoke Friday to somebody named Mr. Bucky Kensey(?) who wouldn’t tell him a number but said the bond market had moved in the county’s favor. The Chairman also said:

I want the public to understand these are not new bonds these are old bonds that are at a higher interest rate that are going to be refinanced at a lower rate, and I believe the last savings was close to a million dollars.

The Chairman indicated Mr. Kensey(?) thought there would be a pleasant surprise with even more savings than that.

At their 12 June 2012 Regular Session the Commission appointed to the Lowndes County Public Facilities Authority Joseph Stevens (they didn’t say, but maybe Joseph G Stevens CPA), Steve Gupton (presumably J. Stephen Gupton, Attorney for the Lowndes County Industrial Authority), and Lowndes County Commissioner Crawford Powell (to the seat previously held by Commissioner Richard Lee). Who are the other Authority board members? The VDT claimed “Powell abstained from the vote.” Neither he nor the Chairman said that when they voted. According to the Commission’s minutes of 25 May 2010, they appointed Harry B. Sullivan and Antonio Henderson. The VDT reported 22 May 2007 that:

So that’s five members; is that all of them? Apparently yes. In Preliminary Official Statement Dated November 29, 2012

So, we’re paying more for the county palace than we are for county water and sewer. Anyway, on page 4 we find:

That Authority met 8 October 2012 in Room 248 at the Lowndes County Administrative Building (no street address given):

The primary purpose of the meeting is for the Authority to consider a Bond Resolution to provide for the issuance of Refunding Revenue Bonds for the purpose of refunding in part Public Facilities Authority Revenue Bonds (Lowndes County Water and Sewerage Project), Series 2005, and Central Valdosta Development Authority Revenue Bonds (Lowndes County Judicial/Administrative Complex), Series 2003, to authorize and approve the execution and delivery of an Intergovernmental Contract with Lowndes County, and related purposes. The meeting will be open to the public in accordance with the Georgia Open Meetings Act.

They do not have a meeting listed in the same calendar for today.

You know, the county could just tell us all this stuff, so we wouldn’t have to try to google it. It is our tax money they are spending, after all.