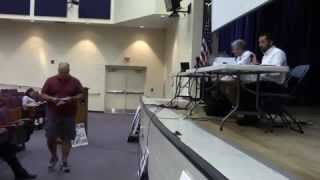 “If you go through with this, you stand a very good chance of destroying this [the Floridan Aquifer] the rest of our lifetimes. And in many lifetimes to come.” Said Marcellus shale drilling veteran Rocky Stewart to FERC in Lake City, Florida, October 1st 2015. Transcript and video:

I am a homeowner in Suwannee County, by Boys Ranch, I currently do not live there, I live in Corpus Christi [Texas]. I’m sure some people here regard me as the enemy, but I am in total opposition to what you all have planned. 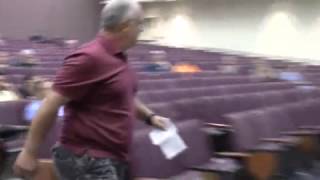 END_OF_DOCUMENT_TOKEN_TO_BE_REPLACED

Yes, we can look under the ground at the Moody Family Housing site, and it won’t take very long, said a VSU professor at the 13 August 2013 Regular Session of the Lowndes County Commission. VSU does have ground-penetrating radar equipment on campus, and a survey would take only a few weeks. Here’s an example of VSU work using that equipment.

John — Thank you for pressing forward on this important issue for the airmen and their families at Moody AFB as well as for all citizens of Lowndes County. My colleagues and I are also concerned and hope that we can eventually obtain the Phase I geotechnical study. Of course, we have our own research agendas as well as a desire to see our students working on these problems close to their own university campus. In particular, one of my undergraduate students just completed his thesis on karst subsidence beneath a house in Lowndes County. Here is a link to a poster where he presented those finding to our undergraduate research conference: GPR Investigation of Subsidence.

Ground-Penetrating Radar Investigation of Subsidence
in Covered Karst near Valdosta