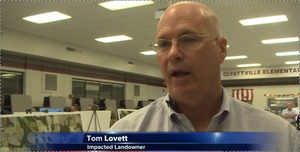 “The pipeline will split our farm in half, and in reality it could kill us and our family because the pipeline will be about 700-feet behind our house”, says Tom Lovett, an Impacted Landowner. 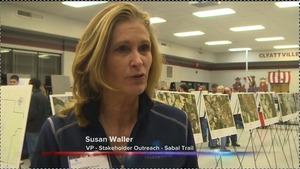 “I understand why the landowners are upset. I mean I really do. I see that they don’t have answers right now, but it just takes time”, said Susan Waller, VP of Stakeholder Outreach for Sabal Trail Transmissions.

And I can attest from last night at Sabal Trail’s Jasper, FL Open House that Sabal Trail continues to refuse to acknowledge its sad safety record or to answer important questions.

Protestors say Sabal Trail has had plenty of time, but a pipeline still isn’t a safe option for the area, one reason: active karst topography, or sinkholes. 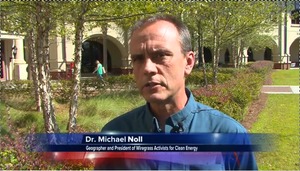 “Scientifically speaking, constructing a pipeline through an area that has active karst topogrophy is insane. From the point of view of an individual who has an interest in sustainability, still betting on fossil fuels, as much as the profits may be handy for some, is not forward looking, we have better options, we have safer options, we have cleaner options”, says Dr. Michael Noll, a Geographer and President of Wiregrass Activists for Clean Energy.

See for example Sinkhole formation and collapse due to drilling under the Withlacoochee River in Hydrogeology Report: Sabal Trail methane pipeline crossing of Withlacoochee River by David Brown. Sabal Trail proses to use horizontal directional drilling or HDD under these rivers, which already have springs, sinkholes, and caves in copious fracture systems. What happens if the drill bit encounters one or more of those? Potentially sinkhole formation, or collapse into an underground cavern.

Such a hydrofracture, or frac-out would form a hole from the surface into the Floridan Aquifer, which is the source of all our drinking water.