More from The Orlando Sentinel:

The Villages is a sprawling 55-and-older community that straddles Sumter, Lake and Marion counties. The sinkhole is on the Sumter side. 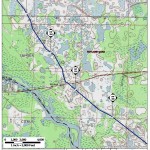 The rainy season, which is starting in Florida, increases the chance of sinkholes, experts say.

So do we need a yard-wide pipeline in a hundred-foot-wide gash through the same fragile area? The proposed path of the Sabal Trail Transmission fracked methane pipeline goes between Rutland and Lake Panasoffkee, less than 20 miles west of The Villages.

1 thought on “Sinkhole under houses in The Villages, Florida, 20 miles from Sabal Trail pipeline path”