Maybe that golf course between FPL and the sea could use a hotel next door; a hotel conveniently located close enough to the canal to buy up some land there, too, forming a corridor with access to both the canal and the sea.

We’ve been told repeatedly by Sabal Trail that its pipeline would bring economic benefits from people staying in local hotels (and who could doubt Sabal Trail), so a hotel is good! Plus a golf course hotel between a canal and the sea would bring in customers long after Sabal Trail’s pipeline-installation roughneck mercenaries finished their invasion of the southeast and retired back to Houston.

Now on this hotel, suppose the golf course wanted to put solar panels, plus some wind mills since this is next to the windy Atlantic. Sabal Trail’s filing refers to the “the growing demand for natural gas by the electric generation, distribution and end use markets in the States of Alabama, Georgia and Florida.” OK, then, the hotel can do electric generation, distribution, and end use all right there in one spot in the State of Florida!

I bet a chain of golf courses could do the same thing throughout Florida, Georgia, and Alabama, especially on some of that unused land that has nothing but Transco and Spectra pipelines on it. And with enough energy production, an interstate consortium like that could propose to become an energy utility in each of those states, or to run power lines down those pipeline rights of way and sell electricity to the existing utilities in each state.

So we should all encourage a golf course chain to petition FL PSC and FERC for “CERTIFICATES OF PUBLIC CONVENIENCE AND NECESSITY AND FOR RELATED AUTHORIZATIONS” so this new golf sun-and-wind energy consortium would have eminent domain to take FPL’s headquarters and Transco and Spectra’s pipelines and turn them into public benefits for all these United States. 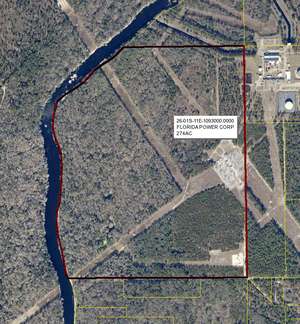 While we’re at it, how about Duke Energy’s Suwannee Plant, conveniently situated on the beautiful Suwannee River, and currently doing nothing to contribute to Florida’s $67 billion tourism economy. Durn thing’s got cooling water intake and outtake canals; repurpose those for boating access to the Suwannee River! Extend them with offshoots, for the Venice of north Florida! Put solar panels on the roofs of the Venetian-style canal houses and the Venetian-style gondolas and on top of the existing FGT pipeline! Good news, current FGT owners Kinder Morgan and Energy Transfer Partners, you have the happy offer of eminent domain: it’s not a threat, it’s a public benefit offer you cannot refuse!

Clearly improved tourism and sun and wind energy are more of a public benefit to the Sunshine State and therefore to all of the United States than a measly $3 billion pipeline bashing through the Springs and rivers and private lands of Alabama, Georgia, and Florida.

Keep on to Houston, where we can reclaim Spectra headquarters for the public good!

Thank you, FPL and Spectra and Williams Company, which filed Thursday in FERC Docket CP15-16 for a permit to get eminent domain. Thank you for showing us the way to the sun and wind power future of the U.S.: eminent domain for us!

Actually, there are already more U.S. solar jobs than in non-supervisory oil and gas extraction, and solar power deployment is growing like compound interest far faster than anything else, with wind a distant second and the failed fracking revolution way down below.

But with eminent domain we can really put the pedal to the metal for faster, cheaper, far cleaner solar and wind power jobs right here where we need them!

PS: And finally let’s take FERC headquarters for the public benefit of all the citizens of the United States. Let’s use eminent domain to top that shiny glass on FERC’s current home office with some shiny rooftop solar panels on the new 888 First Street, N.E. headquarters of nationwide energy utility Solar Hotels U.S.!

It’s for your own good, FERC.