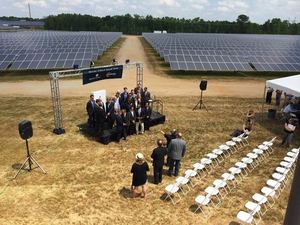 END_OF_DOCUMENT_TOKEN_TO_BE_REPLACED

The solar bill that’s been talked about for weeks has finally appeared in the Georgia legislature: HB 657. It’s better than I expected, because it’s about rural solar generation and distribution. However, there is a catch: a “community solar provider” must be certified by the Public Service Commission, instead of just setting up in business as in most states, and the PSC could certify only one state-wide monopoly; note the summary at the front says “an independent community solar provider” as in only one. But the body of the bill is more circumspect and says “any”. Perhaps if we get enough installations the benefits of solar will become obvious enough that the PSC will certify a lot of community solar providers, and we can get on with solar in Georgia, including house and business rooftop solar. Many thanks to Representatives Kidd of the 145th, Kirby of the 114th, Rogers of the 10th, Brockway of the 102nd, Fullerton of the 153rd, and others. And special credit to Robert E. Green, Shane Owl-Greason, and Ted Terry of Georgia Solar Utilities (GaSU) for shepherding this bill into the legislature.

The bill requires the PSC to study changes in retail rates because of this bill. Too bad it doesn’t go the rest of the way to what North Carolina did, and require timely public posting of who buys and sells which types of energy at which prices, but at least it’s a start.

Maybe HB 657 will help get HB 503 passed for Renewable Portfolio Standards. However, HB 657 is cleaner than either HB 503 or SB 51 because it does not mess around with biomass or for that matter any other energy source: HB 657 is about solar energy and nothing else.

The main part of HB 657 is in Section 1, but first here’s how it shoehorns END_OF_DOCUMENT_TOKEN_TO_BE_REPLACED

The Mayor of Dublin, Phil Best added to the list END_OF_DOCUMENT_TOKEN_TO_BE_REPLACED

Dublin gets the jump on the rest of Georgia again: Dublin High School will get a megawatt of solar electricity through a lease agreement with a private company using local government bonds to get around Georgia’s special financing problem.

Kenny Burgamy reported for for 13wmaz.com Thursday, Solar Plant To Be Located at Dublin High,

The 4,000 panel solar power plant will be the largest in Central Georgia and is expected to save the school 40 percent in energy costs.

Dublin City Schools Superintendent Chuck Ledbetter told 13WMAZ, “The facility will be built and owned by private business and the school system will lease the solar power plant, saving us money in energy costs.”

The original plan was developed more than 15-months ago by German based MAGE SOLAR, which has a plant located in Laurens County.

The story has been carried by GPB by Athens Banner-Herald via AP.

This installation is similar to but slightly different from END_OF_DOCUMENT_TOKEN_TO_BE_REPLACED

END_OF_DOCUMENT_TOKEN_TO_BE_REPLACED

Here are videos of Saturday’s Solar Energy Forum at the Center for a Sustainable Coast (CSC) in Savannah, with

We will probably post more later on the presentations by Paul Wolff and Robert Green, and the ensuing questions and answers. Meanwhile, here’s a video playlist of the entire event:

Local TV is getting it about solar in Georgia, and what’s holding it back!

Supporters say it could save some people big on their electric bills, but leasing solar panels in Georgia isn’t worth it because of a current state law.

Jeff Sain installed solar panels on his Dunwoody house because his electric bill was nearly $600 a month in the summer. With solar his Georgia Power bill plummeted.

But companies in 14 states now offer systems that can be leased with no upfront costs. However, you get less in savings because you have split it with the leasing company providing the equipment.

“Typical savings if you lease panels as people do in other states will be 30 to 50 percent of your power bill,” Consumer advocate Clark Howard said.

GA PSC Stan Wise’s 2009 nuclear CWIP lobbying points eerily matched Southern Company’s, but suddenly he’s got separation-of-powers religion about Georgia Solar Utilities (GaSU). The PSC recommended GaSU’s utility bid anyway. When the legislature takes that up in a month or so, will GaSU CEO Robert Green, unlike SO or Georgia Power or Stan Wise, help the rest of us little people fix the 1973 Territoriality law so we can sell our solar electricity on a free market?

The Georgia Public Service Commission approved a plan by Georgia Power Co. Tuesday to acquire an additional 210 megawatts of solar generating capacity, more than tripling its investment in solar energy.

But a sharply divided PSC also gave a potential competitor to Georgia Power its blessing to appeal to the General Assembly to amend a 39-year-old law that gives the Atlanta-based utility the exclusive right to continue serving existing customers.

Under Georgia Power’s Advanced Solar Initiative, the company will buy solar power produced by both large “utility-scale” solar farms and from smaller projects operated by residential and commercial property owners.

Right, that’s actually only 10 Megawatts from “smaller projects”, maintaining Georgia Power’s monopoly while throwing throwing a bone to the rest of us.

While the PSC supported Georgia Power’s plan unanimously, a subsequent motion by McDonald encouraging other solar utilities interested in serving Georgia to pursue their plans with the legislature passed by the narrow margin of 3-2.

Georgia Solar Utilities Inc., a company launched in Macon, Ga., earlier this year, filed an application with the PSC in September for authority to generate solar energy in Georgia on a utility scale.

The two Nay votes were from the two recently-reelected PSC members, apparently now thoroughly in the pocket of the incumbent utilities. Here’s one of them now:

END_OF_DOCUMENT_TOKEN_TO_BE_REPLACED

So what is Georgia Power afraid of that made their CEO Paul Bowers double down on old-style baseload? Competition, that’s what! What could be more scary in the power-monopoly state of the 1973 Territorial Electric Service Act?

On one side, Georgia Power faces GaSU and its 80 or 90 MW solar plant proposal. Walter C. Jones wrote for OnlineAthens 24 September 2012, Proposed solar company could stir up Georgia’s utility structure,

A proposal from a start-up business promises to lower electricity rates by rebating profits to customers if given a chance to compete as Georgia Power Co.’s “mirror image.”

To proceed with its long-range plan of developing 2 gigawatts of solar power, the start-up, Georgia Solar Utilities Inc., wants to start by building an 80-megawatt “solar farm” near Milledgeville as soon as it gets a green light from the Georgia Public Service Commission. GaSU filed its request last week, and as of Monday, it’s still too fresh for public evaluation.

So radical is the proposal that spokespersons for Georgia Power and the Georgia Solar Energy Association said they still were evaluating it and could not comment.

Groups that normally advocate for customers also are staying quiet.

END_OF_DOCUMENT_TOKEN_TO_BE_REPLACED

And what if even one of that three-legged regulatory capture stool’s legs went away? END_OF_DOCUMENT_TOKEN_TO_BE_REPLACED