If not consistent with the Comprehensive Plan, nor with the water and sewer growth plan, fire and rescue doesn’t want it, and the Planning Commission recommended rejecting it, what does it take for the Lowndes County Commission to reject a zoning, in this case for REZ-2018-17 for The Settlement North, 5999 Val Del Road? 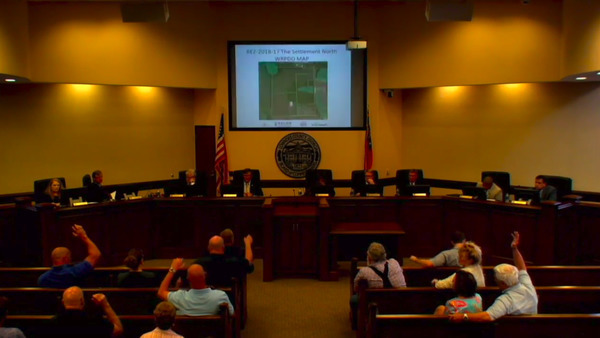 Only three people were allowed to speak against, of the five whose hands went up.

The developer promised restrictive covenants enforced by nobody but the homeowners. County-imposed conditions on the Nelson Hill development, also on Val Del, were largely waived by county staff without public hearings. What promises should we believe?

Will the developer’s demand to ignore the Comprehensive Plan because of “market conditions, supply and demand” prevail? Do property values of neighbors not matter? How about saddling the county school system with houses priced too low for property taxes on them to cover expenses of sending school buses? Or is profit for a few all that matters?

1983 constitutional law had priority of law precedence over the older statute & CUEE was advised before they asked for signatures it could be protested on those grounds before or after the vote. Thankfully we did not have to go that route. I remember in high school I did a project on outdated laws still in the GA Constitution including mandatory hanging for horse theft (which I liked). There was also a law if you hit & killed a cow or pig on the road you were required to get out & slit the throat so the owner could salvage the meat & many others that were outdated & no longer enforced. I trust these have now been removed. The general assembly should be thankful that we are addressing this 57 year overdue need for house cleaning & remedy this in January. Rule of Law should never remain questionable when it is the duty of our lawmakers to provide clarity.

Whenever the citizens of a municipality or independent school district authorized by law to establish and maintain a system of schools by local taxation in whole or in part are operating a system of public schools independent of the county school system and wish to annul their special school law and become a part of the county school system, they shall present and file with the governing authority of the city a petition signed by one-fourth of the qualified voters of their territory; and the governing authority shall then submit the question at an election to be held in accordance with Chapter 2 of Title 21. A majority of those voting shall be necessary to carry the election. Only qualified voters residing within the municipality or district for six months prior to the election shall vote. An election shall not be held for the same purpose more often than every 12 months.

Disclaimer: These codes may not be the most recent version. Georgia may have more current or accurate information. We make no warranties or guarantees about the accuracy, completeness, or adequacy of the information contained on this site or the information linked to on the state site. Please check official sources.

While I live in the city as was able to vote on the consolidation issue,

I feel that only a vote where both city and county residents would be democratic. Only a vote where both interested parties could take part would reveal the will of the people and be admissible. Although I opposed the effort to consolidate that was recently defeated, I feel strongly that a true vote of both city and county residence is necessary if consolidation should reach the ballot anytime in the future. For this reason it is paramount that the old law that allowed the city only vote be stricken to allow the georgia constitution to prevail. The GA constitution allows for both city and county to vote and a majority in both in order to pass.

Please contact your legislator to support repealing the 1928 law from the GA law books.

Thank you ALL for your commitment to community,

If we are concerned about our children really getting an education, better be concerned about equal employment and getting federal funds, so these parents get their equal share of the jobs, in the community…. I’m talking about the qualified parents that apply for jobs in this area and some of you know they don’t get them.
[applause]

Update 12:55 3 Nov 2011: LCBOE’s own video of their 1 November open forum on Financial Issues of Consolidation is now available on YouTube.
Apparently there are still many people out there who don’t know much about school consolidation. A quick yet comprehensive way to find out is to read the Grassroots Handbook Against School Consolidation by David Mullis.

This was the first of three forums on school consolidation hosted by the Valdosta Board of Education. It was at Valdosta High School on 8 September 2011.

Here are videos of the entire Open Forum on education

held by the Valdosta Board of Education at JL Lomax Elementary School 25 October 2011. This forum was advertised starting 29 August 2011, almost two months in advance, and was the third of three forums held by VBOE. As I asked back back on 1 September, Where was CUEE at the school board meetings? One or two showed up at each of the VBOE forums. Where were the rest of them?

Oh, that’s right! CUEE’s idea of a forum is to phone up

selected people in the middle of the night to come to a meeting when both school superintendents are out of town, oh, and not invite the newspaper of record.

If you still haven’t been to a real open forum, the Lowndes END_OF_DOCUMENT_TOKEN_TO_BE_REPLACED

Susan Wehling made several good points Tuesday, including an invitation for CUEE to put their children where their mouth is, like she already has.

Hi, I’m a parent, and I have three kids in school right now; one just graduated.

First of all, CUEE sent me flyers… to insult my schools…. That was very hurtful for my children to read those flyers telling them how bad my schools are. My schools are not bad, and I’m very upset about that.

She also said: END_OF_DOCUMENT_TOKEN_TO_BE_REPLACED
Finally, some truth from the Chamber! “Unification” has nothing to do with education, and everything to do with “He who has the gold rules.” Not any Realtors’ fault of course, “The Realtor doesn’t drive to showings; she just turns the wheel and hits the gas.” So they’d rather destroy public education through a proven failed “unification” than deal with their claimed perception problem. -jsq