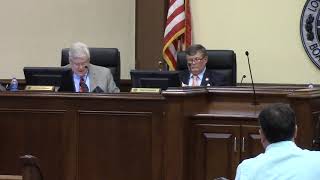 Longest at 2.5 minutes: appointment to Parks and Rec. Commissioner Scottie Orenstein was not present at this Regular Session of the Lowndes County Commission.

Not on the agenda and not on the county’s website, Chairman’s Announcement of Emergency Operations Center Open House.

The applicant spoke for 6.a. Beer, Wine & Liquor License – Jack’s Chophouse, 4479 N. Valdosta Rd. We have a winner for the RFP for Banking Services.

Maybe they all finally got to read the 7 d. Ordinance Adopting Current Board of Health Rules, since this time END_OF_DOCUMENT_TOKEN_TO_BE_REPLACED

Eight minutes to do your business: yesterday morning’s Lowndes County Commission Work Session. Commissioner Demarcus Marshall took the day off from his work at the City of Valdosta to be there. Not clear the rest of them took it that seriously. He and at least one other Commissioner did get some questions in. And they did all show up, at least. We’ll see if they’re all there for voting this evening at 5:30 PM. 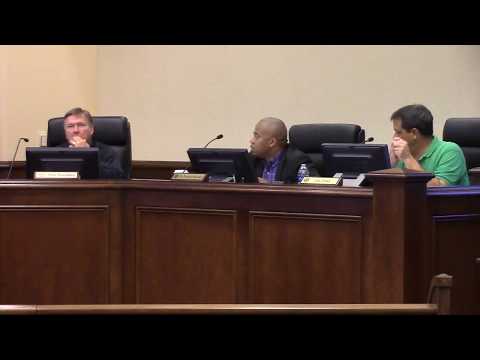 Some interesting questions on the END_OF_DOCUMENT_TOKEN_TO_BE_REPLACED 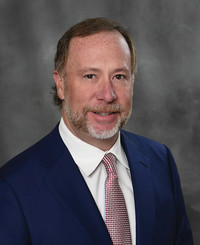 In an interesting version of a revolving door, county appointee Michael H. McDowell’s KLVB term is expiring, so is Valdosta appointee Bubba Highsmith’s, and the county proposes appointing Highsmith. Highsmith is a State Farm Insurance Agent.

Also on the Lowndes County Commission agenda for 8:30AM Monday morning are: banking services (looks like Ameris Bank costs way less than BB&T, and SunTrust even less, but Ameris has the best interest rate), a computer bulk purchase for $54,795.98, yet another pump purchase, allegedly for $0 dollars because this is actually for specifications rather than actual purchase.

Finally, the tabled-from-last-meeting Ordinance about Board of Health Rules: will the Commissioners have had time to read the one copy the County Manager allows them?

Plus an alcohol license, END_OF_DOCUMENT_TOKEN_TO_BE_REPLACED

Solar companies are shaking out just like car and computer companies before them. Dozens of automobile manufacturers shook out to a handful of major ones; Tesla is the first new one in decades. So many computer hardware and software companies went under or were bought by bigger ones that it would take a very long blog post to list them all; I could name a dozen or two off the top of my head. There’s a shakeout going on right now among mobile phone manufacturers: even mighty Nokia is sinking. The solar industry is going through that same normal shakeout phase. Will electric utilities be next?

Stephen Lacey wrote for greentechsolar 23 April 2013, Four Must-See Charts on the Future of the Global Solar Market: Who will be left standing when the dust settles?

In 2009, after Spain’s market collapsed and the world faced a crippling financial crisis, GTM Research predicted a shake-out in the manufacturing sector. But unexpected growth in global demand, particularly in European markets, helped keep many producers afloat.

Then, in 2010 and 2011, we saw a surge of new manufacturing capacity — much of it driven by China — that created the structural oversupply faced by the industry today. As illustrated by the growing list of deceased solar companies and acquisitions, the delayed shake-out in the industry is now well underway.

This morning at the GTM Solar Summit, Shayle Kann, vice president of research, shared his outlook on consolidation, module prices, and the shifting global demand through 2016. Here are four charts from his presentation that provide a glimpse of what the world may look like in the next three years.

In 2010, when the period of irrational growth began in solar manufacturing, there were 357 active module producers.

By the end of this year, that number will be down to 145. And in 2016, it will drop below 100. (So if you’re at a conference talking to a person involved in manufacturing, there’s a good chance he or she might be out of a job or working for a different firm the next time you see them.)

He then predicts that solar PV panel prices may actually rise briefly due to fewer manufacturers. However, as he notes, demand will keep going up. And demand combined with economies of scale may make prices continue down with Moore’s Law. I think his installed capacity graph is way too conservative, because he doesn’t go back far enough, which would reveal that 2010 growth is not an anomaly, it’s a steady continuation of the previous decade (well, except in Georgia). We shall see what happens in the next few years.

One thing’s for certain: a few bankruptcies are not a problem for the world’s fastest-growing industry. They are merely a symptom of any industry growing that fast. Solar panels will continue to spread, ever-faster, and electric utilities need to adapt or soon their big utility shakeout will start, too. The utility shakeout may look more like an increase in companies, as many solar installers and vendors move in to handle distributed solar power if the incumbents won’t do it. That’s my speculation, and again we’ll see.

SO and Georgia Power can try to ignore END_OF_DOCUMENT_TOKEN_TO_BE_REPLACED