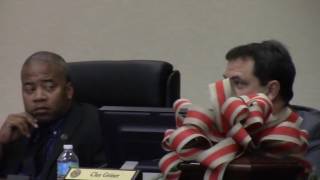 24 minutes on REZ-2016-19 Turnberry at Thompson E-A to R-21 which changed to R-1 at the last minute, 14 minutes on Bill Branham’s REZ-2016-23 Copeland Road development, 4 on REZ-2016-24 Martin< 3 on REZ-2016-25 Cain’s Creekside RV Park, and 3 on the Peterson Road Lift Station Rehab, plus almost 5 minutes of Chairman and Commission Comments! Real discussion and revealing their opinions in public? What’s gotten into them? Did they see in advance the VDT’s Sunlight on the horizon?

Yet the Chairman said nobody could ask the audience to stand up on REZ-2016-19 Turnberry at Thompson and while they were waiting for the room to clear before the next item could start, END_OF_DOCUMENT_TOKEN_TO_BE_REPLACED

You thought Hurricane Sandy was bad? You were right, but economically, the ongoing drought is worse economically. But we already know a much brighter path.

Sandy’s damages of perhaps $50 billion will likely be overshadowed by the huge costs of the great drought of 2012.

By Dr. Masters’ estimate, the 2012 drought will cost more than half again as much as Hurricane Sandy.

Also notice Hurricane Katrina still at the top of that table, with almost three times the economic damage and far more deaths than Hurricane Sandy. We could have gotten the message back in 2005, but hey, those were only poor southern people, so who, in for example New York City, really cared? Yes, I know many of us did and many of you actively helped, but I’m sure you see my point that when greater New York gets the storm, suddenly the country pays attention and a lot more people want to find out how to keep that from happening again.

What’s that drought look like for us here in Georgia at the moment, according to U.S. Drought Monitor?

END_OF_DOCUMENT_TOKEN_TO_BE_REPLACED

22 gigawatts of electricity per hour—equal to 20 nuclear power stations at full capacity—through the midday hours on Friday and Saturday, the head of a renewable energy think tank said….

Norbert Allnoch, director of the Institute of the Renewable Energy Industry (IWR) in Muenster, said the 22 gigawatts of solar power per hour fed into the national grid on Saturday met nearly 50 percent of the nation's midday electricity needs….

The record-breaking amount of solar power shows one of the world's leading industrial nations was able to meet a third of its electricity needs on a work day, Friday, and nearly half on Saturday when factories and offices were closed.

Berlin is at more than 52 degrees north latitude. Even southern German city Munich is at 48 degrees north. That's a thousand miles north of where we sit here in south Georgia at 31 degrees north.

"Never before anywhere has a country produced as much photovoltaic electricity," Allnoch told Reuters. "Germany came close to the 20 gigawatt (GW) mark a few times in recent weeks. But this was the first time we made it over."

Maybe it's time for the Southern Company and Georgia Power to get out of the way and let the Georgia legislature change the Georgia Territorial Electric Service Act of 1973 so we can get on with solar power in Georgia. How about if Southern Company and Georgia Power also stop pouring money into the leaking nuclear bucket and buy solar power instead.

Skipping in to the Industrial Authority office to file an open records request, I noticed all five board members in the board room having a meeting. So I asked whether an appointed board was bound by the same state law as for an elected body that it had to announce meetings in advance. Lu Williams said that it was a special called meeting, that they sent a notice to the VDT, and yes, they were bound by the same rule.

I asked if I could have a copy of the agenda of the meeting in progress. She said they had all the copies in there but she would get me one later.

However, I did pick up a copy of tonight’s agenda, and typed it in, so, for apparently the first time ever, here is the agenda for a VLCIA board meeting on the web before the meeting. -jsq