Saying in 2014 that solar and wind can’t power the world is like saying in 1994 that the Internet couldn’t become the main form of communication for the world, and people did say that. “Allison, can you explain what the Internet is?” There are already more jobs in solar than in coal, or in non-managerial oil and gas extraction.

1994, by the way, was the year Japan finally changed its laws to facilitate domestic Japanese Internet companies. I was there, and saw the lines stretched across the huge new conference center north of Tokyo to get CDs with Internet software. And 2013 was the year formerly all-powerful Georgia Power and Southern Company lost big-time at the Georgia PSC, which forced Georgia Power to buy twice as much solar power. The same GA PSC later refused to even entertain a solar connection tax.

Japan now has Internet access ten to a hundred times faster that costs less than the slow stuff we have in the U.S. We can get on with solar and wind power here, or the rest of the world will do it first. Oh, wait, that’s already happening in Germany and Netherlands and…. The U.S. will catch up, because U.S. companies will eventually demand U.S. utilities change.

And for what “eventually” means, think personal computers, the Internet, mobile phones, and smart phones, each happening faster. Solar photovoltaic prices are being driven down and deployments up by the same technological and economic factors that drove those previous waves. Just look at North Carolina, where you can’t even drive down I-95 without seeing a solar farm with lots more coming. We can wait for Richard Smith’s revolution to come while the world cooks, or we can work right now to remove barriers to solar deployment and stop fossil fuel and nuclear boondoggles. You want a revolution? Start by taking away the fossil fuel funding that’s corrupting government.

Yes, we can power the world with solar and wind. And we can do it very fast, with solar overtaking every other power source in the U.S. within a decade; so fast your jaw may drop. And we can do it while improving everyone’s quality of life with cheaper and more reliable power using less resource extraction. 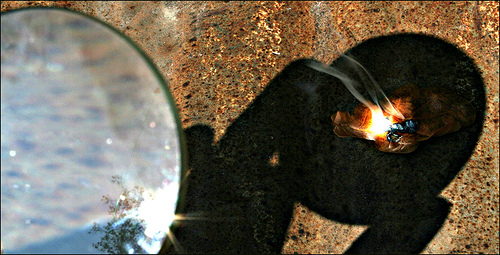 Actually, as I wrote almost two years ago, before Moody’s verified the U.S. version of the European carbon bubble, before electric utility think-tank Edison Electrical Institute announced distributed solar power was already eating utilities’ afternoon siesta, and before more than ten nukes were shut down or cancelled:

As Kathleen Rogers and Danny Kennedy wrote in EcoWatch a year ago:

Renewables are Winning, Nukes are Dead, and Coal is Crashing

The solar sun is rising, even on Georgia.