How much solar power is there in Georgia? Quite a bit, and it’s everywhere, according to Georgia Energy Data map by Southface. 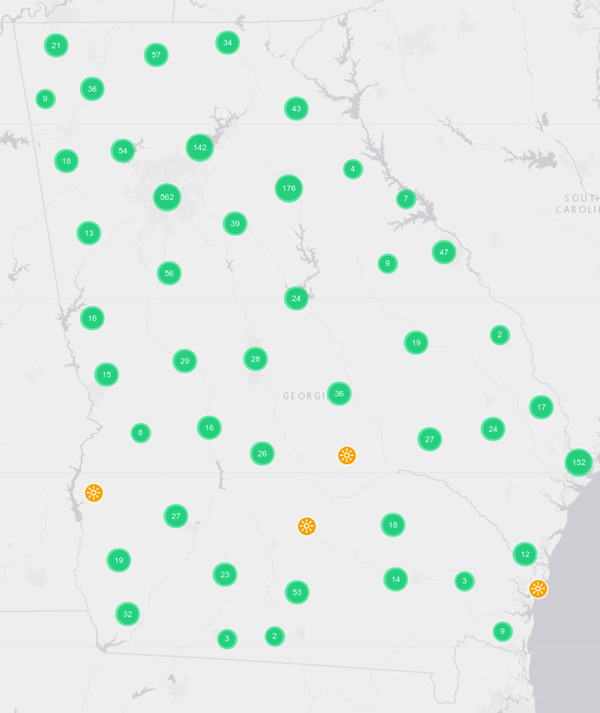 There are three 1 megawattt (MW) solar farms in Berrien County I didn’t know about, and more elsewhere in the Suwannee River Basin, in almost every county. END_OF_DOCUMENT_TOKEN_TO_BE_REPLACED

The Pentagon has been aware for years of END_OF_DOCUMENT_TOKEN_TO_BE_REPLACED

The Telegraph reports that land has been cleared on a 57-acre tract near Georgia Highway 247 to make room for solar panels.

Previously the 57-acre tract next to Ga. 247 just south of the Museum of Aviation was forestland, but those trees have been cut down over the past month to make way for the solar array….

END_OF_DOCUMENT_TOKEN_TO_BE_REPLACED

Houston County hasn’t had a enforceable encroachment zone around Warner Robins Air Force Base (RAFB) and is now fixing the problem after the fact by using state money to buy up houses near the base.

Houston County Commission Chairman Tommy Stalnaker labelled encroachment his number one priority, in stark contrast to Lowndes County Commission Chairman Ashley Paulk, who has put two items on the agenda for Monday and Tuesday related to a proposed rezoning next to Moody Air Force Base, and already at a previous Work Session invited the developer to speak without letting anyone else speak.

State Rep. Larry O’Neal called and gave him a heads-up before Gov. Nathan Deal made the announcement on Friday.

“I felt like jumping up and down and screaming and hollering,” Stalnaker admitted. “But then I remembered we hadn’t done our part yet.”

Encroachment has dogged Robins for a number of years. Some 250 parcels — mostly private residences — spread over 1,600 acres in south Bibb and north Houston counties fall within the base’s noise or potential mishap zone.

That risk to homes in the designated region could restrict or limit current operations or force the Air Force to look elsewhere for future workload and mission growth.

Stalnaker has labeled resolving encroachment his number one priority.