Grady Blankenship wrote a LTE in the VDT Wednesday, in which he asked “do you have solar energy yourself?” Why yes, yes, I do. And I have some questions for everyone at the end.

Back in 2009 we installed solar panels on our farm workshop. At the time the closest certified solar installer I could find was in Marietta. Four years ago there were 4 in the state. now there are forty. And that’s in a state that’s trailing North Carolina and even New Jersey in solar installations.

Also, I applied some weeks back for a USDA REAP grant for solar for Okra Paradise Farms.

Much to our surprise, last week we learned we got the grant! This was possible due to the able assistance of Sherry Wheat and Alina Yakusheva of Hannah Solar, who had all the paperwork lined up ready to go with explanations of what to fill out where.

Why Hannah Solar? Because they had demonstrated capability by installing the Wiregrass Solar plant in Valdosta and because they had their ducks lined up in a row about that grant application. The REAP grant plus federal and state rebates will pay for around 90% of the cost of this additional solar installation. Sure, I’ll end up paying the difference out of pocket, but the whole thing will end up net positive in 3-7 years. What else can you say that about with any certainty: a car, a house, stocks, even a job?

And before anybody starts griping about subsidies, remember fossil fuels get 12 times the subsidies of renewable energy. There is private venture capital available for large-scale solar projects right now (here’s one example).

Wednesday, Sherry Wheat drove down from Atlanta to help at the Renewable and Sustainable Energy Network forming up at the Chamber of Commerce’s Opportunity Central. The participants are trying to do something about educating people about renewable energy hereabouts.

That same day Blankenship’s LTE also asked the silly question, “what it would cost to keep one freezer running.” He had trouble finding an answer because nobody really sells solar at the per-freezer level; it tends to be for household or larger. That’s like asking how much coal would it take to run a single freezer. Except, wait, for solar no fuel is required! Dr. Noll has already provided pointers to where to find quotes for house-scale solar power.

Let’s go beyond Blankenship’s nit-picking and look at the big picture.

Renewable and sustainable energy is a matter of national security, 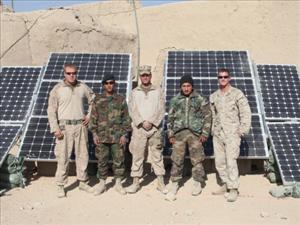 as the U.S. military discovered in Afghanistan, where trucking in oil to run air conditioners in the desert was a major security risk until they switched to solar electricity generation instead. Who wants to owe our power generation to Saudi Arabia, where they flog women for driving? Who wants to fight another land war in Asia for oil?

The real questions are: