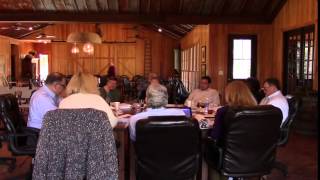 So why does Augusta have the second highest high tech job growth in the country? I can only speculate, but local government transparency could be a factor. If you had a high tech company and were looking to open an office, would you go for a place where you couldn't tell what the local governments were up to, or one where you could easily find out? Augusta's combined City Council and County Commission meetings (it's a consolidated government) are on video, online. Their agendas are available in either HTML or PDF, with attachments.

Here's an example, their

5 December 2012 Commission Meeting. It includes a proposed amendment to their land subdivision code. The actual proposed ordinance is linked right into the agenda so everybody can see it.

And yes, they link attachments into their agendas before their meetings; here's Augusta's agenda for their meeting tomorrow 18 December 2012, already with attachments, such as this one about a zoning exception, which was apparently submitted on a standard agenda submittal form, and approved by the Clerk of Commission.

complained the Chamber of Commerce hadn't read a proposed zoning code change even though that change is not linked into the agenda (nor is anything else) and last year the same Chairman said no drafts would be published. Tuesday last week, Lowndes County Commissioners passed changes to the solid waste ordinance and to the alcohol ordinance that voters and taxpayers and business owners did not get to see before the Commission voted on them. Those ordinances seem to be on the county website now that it's too late to provide input on them: alcohol and waste. Both ordinances were revised with no public hearings. And the Chairman even forgot to hold a scheduled public hearing on special tax lighting districts. Oh, and they apparently now have property owners paying on almost $9 million in bonds for a county palace that only two years ago they said was already completely paid off out of sales taxes.

If you had a high tech company and were looking to open an office, END_OF_DOCUMENT_TOKEN_TO_BE_REPLACED

Video by George Boston Rhynes for bostongbr on YouTube.

Actually, it's even worse than JC indicates, because because HB 797 specifies more money per pupil for charter than for public schools, and the difference has to be made up out of local sales or property taxes.

If the Southern Company’s slick nuclear financing deal and its ongoing operation of three of the country’s dirtiest coal plants (two of them in Georgia) is such a good deal, why are so many insiders selling so much stock?

or a new wing on his house, or something. A brief scan of nearby energy companies (Duke and Progress) indicates it’s not unusual for an energy company CEO to sell shares, although mostly not for this much dollar amount. $12.4 million is more than twice Fanning’s 2010 salary of $6.02 million, and well more than his 62% raised 2011 salary of $9.75 million that Georgia Power customers get to help pay for through Construction Work in Progress (CWIP) charges for the new nukes at Plant Vogtle that won’t be built for years, if ever.

selling a bunch of stock in April? Also there have been only a couple of puny little purchases, each of less than $30,000, in the past year. Why so much selling and so little buying by insiders?

Maybe new nukes are an increasingly bad business risk for Southern Company and Georgia Power. Perhaps some economic expert can help with this question; how about Moody’s? Maybe Georgia Power customers and Georgia and U.S. taxpayers and voters have an opinion?

eventually becomes obvious even to their board and shareholders as actually a big risk, and when SO realizes Cobb EMC made the right choice for profit by ditching coal plant plans and building solar plants instead; when SO finally suddenly switches to solar like Cobb EMC and Austin Energy already did. Will insiders decide SO’s stock has become a good buy when SO builds solar and wind plants?

The next T-SPLOST public meeting is tomorrow morning:

These meetings are intended to gather public input:

After the public meetings the Roundtable will reconvene to review the public comments and adopt a final Constrained List that will be presented on the ballot to voters in 2012.

If you can’t go to the meeting, you can send in the public comment form or email Corey Hull at the SGRC.

I don’t know what you might want to comment on, but a couple of things that come to my mind are: The public meetings for Transportation Sales Tax Project List are coming up in a few weeks. The one in Lowndes County is:

There’s a meeting in Fitzgerald later that same day, and an earlier meeting in Waycross on Wednesdday, September 7th. If you’re interested in saying something about the 50% increase in the Old US 41 North widening project or about some of the other projects still on the constrained list, this would be the place to do it. You can also send in written comments. Here’s contact information.

Just for clarification purposes – this will be the “first reading” on this issue. No vote will take place tonight. It will be placed on our next council meeting agenda later this month for the second reading. That is when it will come to a vote.
-Tim Carroll

Thanks for the clarification, Mr. Carroll. At the reading today, I hope to present to you and all of the other fine leaders of our city the signatures gathered thus far.
-Alexander Abell

Here is Alexander Abell’s previous letter, which includes a link to the petition.

A Georgia-based maker of high-efficiency, low-cost solar panels plans to open a manufacturing facility in Saginaw County after state officials approved a new photovoltaic tax credit. The project, which is still subject to a federal loan, is expected to create 500 jobs.

The Michigan Economic Growth Authority in a special session Tuesday approved the credits for Norcross, Ga.-based Suniva Inc. The company will get a $15 million refundable credit against its Michigan Business Tax liability over five years in exchange for its planned $250 million investment.

Suniva manufactures photovoltaic solar panels. It was getting so many orders it needed a new plant in addition to the one it has in Norcross, Georgia. Those 500 jobs and $250 million in investment could have come to Georgia. Maybe they could have come to Lowndes County. I haven’t been able to find any local government or appointed official who tried to get it to come here.

Suniva is still ramping up production in Georgia. They may eventually need a third plant. Maybe somebody should talk to them.