END_OF_DOCUMENT_TOKEN_TO_BE_REPLACED
What’s the connection between the Florida law that’s letting the killer of Trayvon Martin hide, the private prisons CCA runs in Georgia and other states, and HB 797, the Georgia charter schools bill that’s on the floor today for Senate debate today? ALEC, the American Legislative Exchange Council.

ALEC seems, however, to have a special interest in privatization

— that is, on turning the provision of public services, from schools to prisons, over to for-profit corporations. And some of the most prominent beneficiaries of privatization, such as the online education company K12 Inc. and the prison operator Corrections Corporation of America, are, not surprisingly, very much involved with the organization.

What this tells us, in turn, is that ALEC’s claim to stand for limited government and free markets is deeply misleading. To a large extent the organization seeks not limited government but privatized government, in which corporations get their profits from taxpayer dollars, dollars steered their way by friendly politicians. In short, ALEC isn’t so much about promoting free markets as it is about expanding crony capitalism.

And in case you were wondering, no, the kind of privatization ALEC promotes isn’t in the public interest; instead of success stories, what we’re getting is a series of scandals. Private charter schools, for example, appear to deliver a lot of profits but little in the way of educational achievement.

Think about that: we seem to be turning into a country where crony capitalism doesn’t just waste taxpayer money but warps criminal justice, in which growing incarceration reflects not the need to protect law-abiding citizens but the profits corporations can reap from a larger prison population.

Martin Luther King Jr. wrote from a Birmingham jail in 1963:

Injustice anywhere is a threat to justice everywhere.

And today we have an organized threat to justice everywhere. That threat is called ALEC.

on Feb. 27, 1965. It was a strong statement of support for the life of a man whom controversy followed until his assassination at the age of 39. So why did Davis potentially risk his career to pay tribute to Malcolm X? A letter, written by Davis, explains his decision. The letter will be on public display this weekend.

Davis’ letter will join dozens of other historic artifacts for a special Black History Month observation, sponsored by the 100 Black Men of Valdosta Inc. The Sixth Annual African-American Artifacts exhibit will be on display noon to 5 p.m. Saturday and Sunday, Feb. 25 and 26.

Kind of weird phrasing there, Ms. Editor, given that Ossie Davis’ tribute was after Malcolm X was assassinated….

I’d like to read that letter. How about you?

Here is a video of that eulogy (although the voice is not that of Ossie Davis): END_OF_DOCUMENT_TOKEN_TO_BE_REPLACED

Received today (this is the event Sam Allen mentioned in his speech on Valdosta City Hall steps last Wednesday). -jsq

According to Occupy Valdosta’s mission statement, the group exercises their right to “peacefully assemble, to nonviolently occupy public space, to create an open process to address the problems they face, and to generate solutions accessible to everyone.”

In an attempt to raise revenue, Bank of America Corp. plans to charge customers at the beginning of next year with a $5 fee every month they use their debit cards outside of withdrawing from the Bank of America ATM.

Protestors demanded an answer from the bank downtown, but employees refused to comment.

Organizers expect hundreds to gather this weekend in front of the Valdosta-Lowndes County Chamber of Commerce for a march opposing the consolidation of city and county school systems. 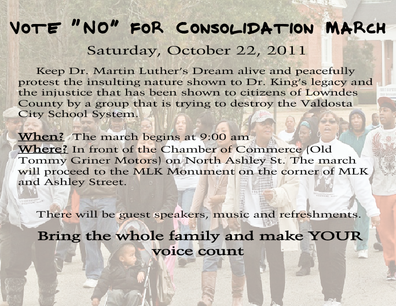 Scheduled for 9 a.m. Saturday, Oct. 22, the march takes the stand that “our children are not for sale.”

“We intend to put hundreds of people in the streets,” said the Rev. Floyd Rose, president of the Valdosta-Lowndes County chapter of the Southern Christian Leadership Conference. “We know and they know that this has never been about consolidating the school system.”

Interesting that the VDT neither contradicts that nor finds a counterview to publish. Maybe since the VDT did an about-face about consolidation, it’s been able to see more clearly…. The march will be led by Rose, Sam Allen, former Valdosta City Schools superintendent, and Leigh Touchton, NAACP president. Other community leaders and representatives from both Lowndes and Valdosta high schools will be present.

9AM Saturday at the parking lot across from the Chamber of Commerce.

Many people stood up at the Martin Luther King Jr Monument last Friday and spoke. Here they are (we may have missed a few). 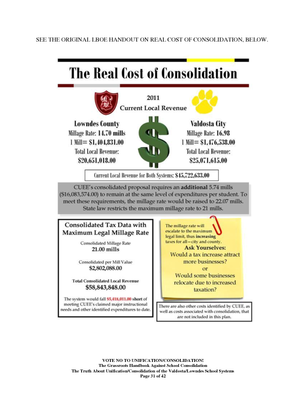 the Valdosta City Schools into the Lowndes County School System will be held November 8, 2011. The City only is being asked to vote on whether to dissolve the Valdosta City School charter. The proponents of the referendum had a choice between putting the referendum in front of the county and city or the city alone. The Lowndes County Board of Education asked

END_OF_DOCUMENT_TOKEN_TO_BE_REPLACED At the MLK Monument last Friday, I brought up private prisons. Most of the 150 people marching to Occupy Valdosta did not know that the Industrial Authority is helping Corrections Corporation of America (CCA) build a private prison in Lowndes County. Even though it would not decrease unemployment, it would compromise public safety, and it would probably compete with local labor.

We don’t need a private prison in Lowndes County, Georgia. Spend those tax dollars on rehabilitation and education instead.

Never before in the history of Valdosta have its citizens been met with a greater challenge. The most powerful business interests in our city have conspired to deceive us with a scheme to dilute the black vote, and thereby rob our community of the political and economic benefits to which we are rightly entitled.

We make up 55 percent of the city’s population. However, we are only 34

percent of the county’s population. If the city and county governments are consolidated, which is the real goal of the Committee for Educational Excellence (CUEE), we will lose forever the opportunity to have access to the millions of federal dollars that will come to Valdosta, with which we can rebuild our community; monies that we are now going to the North side.

This is, and never has been, about school unification. However, legally