The eight citizens who spoke against the Dollar General rezoning at GA 122 and Skipper Bridge Road get star billing. 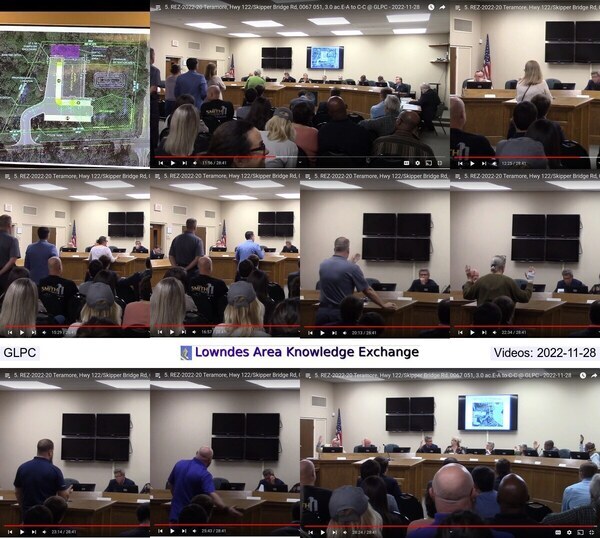 “We don’t need to have new commercial zoning in our area.” —Gretchen Quarterman

“We have no interest in adding convenience to our peaceful little community.” —Becky Rowntree Harris

“The river is literally my back yard.” —Danielle Jackson

“And the other 112 acres would be the next battle.” —William Pope

“Put it across from Ashley Paulk’s development.” —Roxanne Newton

“Even with the goose egg [?] it’s still a Dollar General and I do not want this.” —Dan Richardson

“Please take the wishes of the many, versus the dollars of the few.” —Last Speaker

GLPC voted 7:1 to recommend disapproval. The actual rezoning decision will be made by the Lowndes County Commission at its Regular Session, Tuesday, December 13th, 2022, 5:30 PM. If you don’t want that store in an agricultural area, attracting still more subdivisions still farther north in the county, call or write your county commissioner or come speak against at that meeting. If somebody wants to start a petition, that might also help.

Or you can jump to the full meeting, in which you’ll learn the Hahira deannexation was unanimously voted against, GLPC has a new board member, Ron Bythwood, and a new Chair and Vice-Chair starting in January. 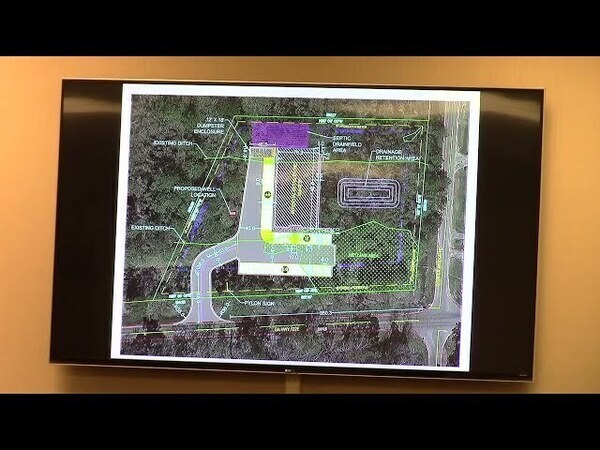 The numbers in front of each speaker’s name are minutes and seconds into the LAKE video of this item. The board packet pages for this agenda item are in a previous post.

enumerated how close Dollar Generals already are to her house: 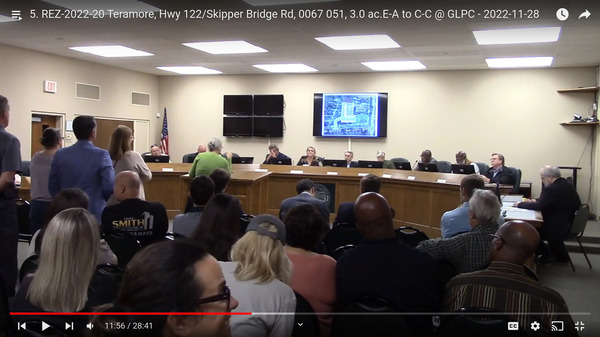 We don’t need to have new commercial zoning in our area. –Gretchen Quarterman

I do not need a Dollar General within 2.4 miles of my house.

This is very close to where we just had the one-acre rezonings up at Val Del and that little circle over there. And people out there now think that they’re living in town, and so they have to have a Dollar General near them.

I certainly hope not!

We do not need a Dollar General. And while it may be appropriate to have commercial zoning at crossroads, like there was at Cat Creek where the little restaurant used to be, we don’t need to have new commercial zoning in our area.

So, no! Absolutely not.

said she co-owns some property with her mother right across GA 122 from the proposed store site. 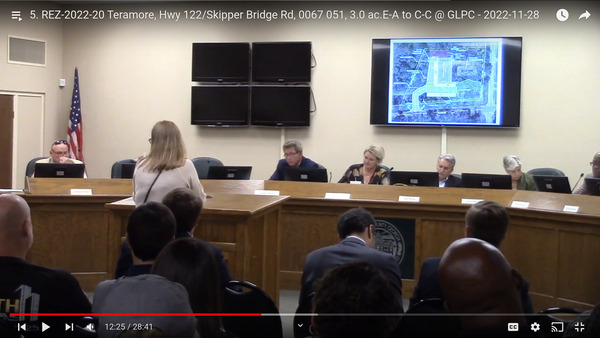 We have no interest in adding convenience to our peaceful little community. –Becky Rowntree Harris

She read a letter by her mother about how paving Skipper Bridge Road and fixing the Staten Road bridge added more traffic, and “we have no interest in adding convenience to our peaceful little community”.

LAKE will file an open records request for such letters.

quoted a few facts from the Census of Agriculture about small to medium farms providing $28 million of $35 million in revenue. 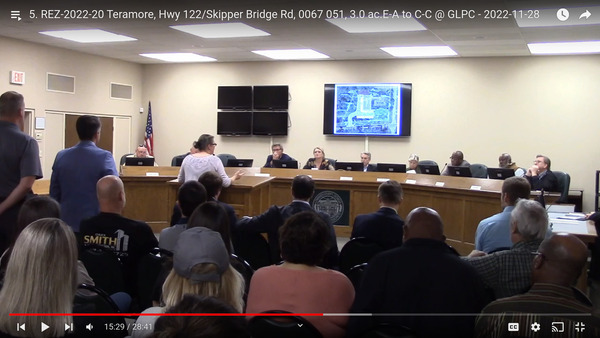 The river is literally my back yard. –Danielle Jackson

She said this project would compromise those small farmers. Including by expansion of small roads, which would be paid for by taxpayers, not developers.

And impact on the [Withlacoochee] river itself, which is only a few hundred yards away.

This will not only affect the wildlife, but also the drinking wells for many folks who live along the river, like I do. The river is literally my back yard.

And not just for the families, but for the livestock for the farmers that are all around those roads.

In closing, I just want to say, that if this goes through, there will be nothing to stop other swathes of land along Skipper Bridge to become a landscape of cookie-cutter homes, just like Val Del.

And it’s forcing those families that have been out there that live in this area for generations, or those of us that are new like I am, that we’re going to have an uphill battle against developers, and investors, who will strip the land for profit.

Again like we did on Val Del. It’s an eyesore.

Once we let the genie out of the bottle, there’s no going back.

I’m not a farmer, but I chose to raise my daughters here amongst the pines and the peacefulness of the Withlacoochee River. So that they may learn to appreciate the beauty of rural living, and their responsibility to preserve it.

I would just like to end with this quote from Franklin Roosevelt. “A nation that destroys its soils destroys itself. Forests are the lungs of our land, purifying the air, and giving fresh strength to our people.”

said he is the adjoining property owner. 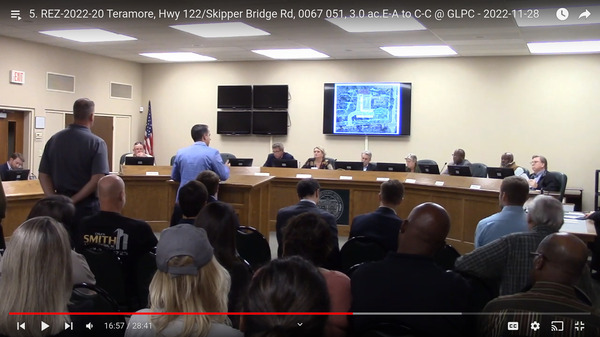 He concurred that he had about eight different options for Dollar Trees already. And he’d be happier to walk eight miles to a Dollar Tree rather than walk down my path to this one.

And let me remind you … that all these folks behind me that are opposing this, we all have close to half a million dollars invested in our homes there.

These folks [the applicants] don’t. Some regional [inaudible] said “hey! we could do that!” [inaudible] Hey, they could do that. But there’s a lot of things I would like to do. That doesn’t mean I should do.

It is very evident that this is wrong for our community.

A couple of things again that’s not being mentioned. Again, Skipper Bridge Road, most of the homes that are beyond me that are on the map and beyond that are all residential. There are no other commercial. Of course, we do have a couple of horse farms in that area, but they don’t really cause the traffic that this would.

The other thing is: this ten day posting, is an absolutely [inaudible due to applause].

I am a leader in a financial institution that does commercial lending, over $40 million over my career in the Charlotte-Rock Hill area. Came down here about six years ago, doing it here as well.

Never once has one of these been approved like this in a rural homesteadeded area.

[inaudible] ten-day is an absolute joke. It is an opportunity for them to slide something in.

Your staff alone said, hey, by the way, we’ve been talking about it for months. We didn’t know that.

So if there was some sleight of hand going on, we would’ve all known about it, and been doing some door knocking, saying, hey, what is your opinion about this. 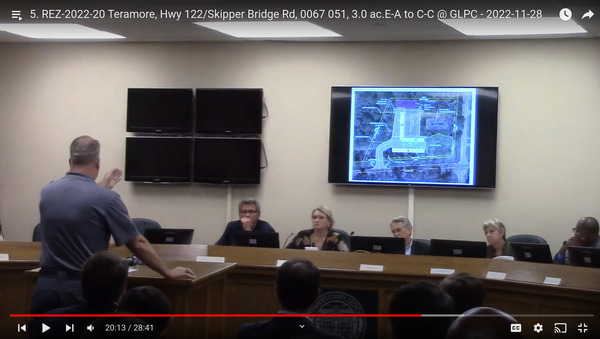 And the other 112 acres would be the next battle. –William Pope

He said there would be need for a driveway that would cost money and back up traffic. And a breakdown lane, not just a turn lane. And the other 112 acres would be the next battle.

So please keep this out of here. We do not need another one. I want to come home to a nice peaceful area. I don’t want to turn the corner and have lights, noise, that all start off nice, and they all come tumble down, everything deteriorates like it does.

We’ll have foot traffic from Cook County coming that way, getting a 12-pack of Busch Light. We don’t need that.

I don’t know what else to say but we do not need this out there. 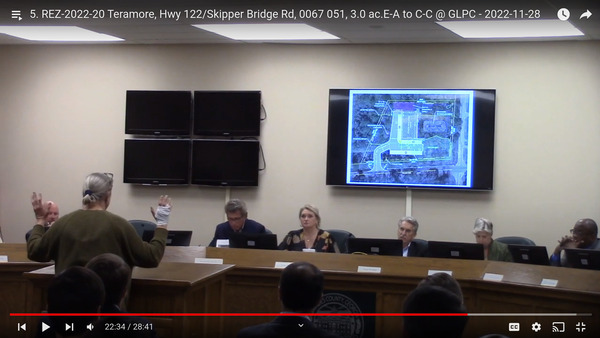 Put it across from Ashley Paulk’s development. –Roxanne Newton

My issue is with once this thing becomes a commercial property, the rest of it, there’s precedent set, for the remaining hundred acres that’s over there.

I mean our property is probably worth a million dollars. This is just tacky. It doesn’t belong in this area. If you want to put it evenly between the two Dollar Generals that are already on Skipper Bridge, put it across from Ashley Paulk’s development.

Even with the goose egg [?] “it’s still a Dollar General and I do not want this.” 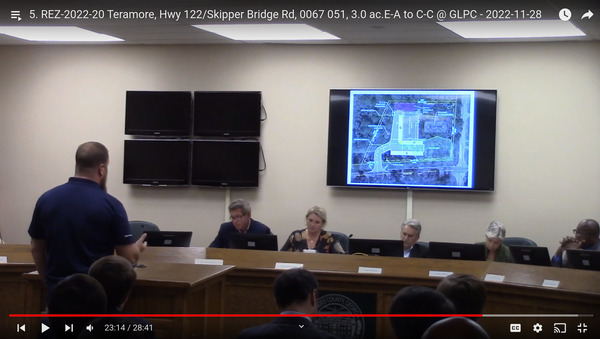 Even with the goose egg [?] it’s still a Dollar General and I do not want this. –Dan Richardson

He said people come down the big curve from Hahira at 65-70 miles an hour and stack up. 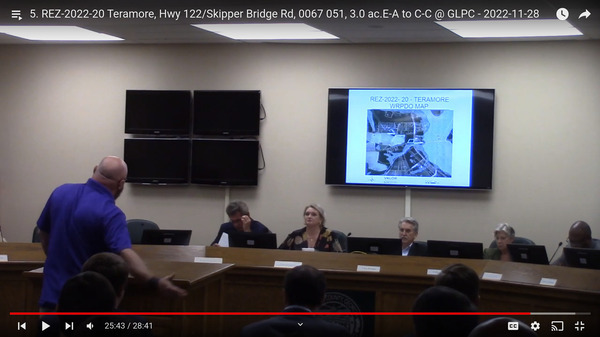 Please take the wishes of the many, versus the dollars of the few. –Last Speaker

I’m a retired 26-year police office, so I know what that amount of traffic is gonna do to our area.

Why I moved out of the city, and spent every dime I had to buy eight acres with a nice house up here at the county line, in a rural area where we didn’t have that, just to live in that rural area. My son was small when we moved to Hahira, and then when we moved out there, the first night he walked outside, and he was like, “I see stars!” He was a topper.

Living in the city, the light pollution, he had never seen a starry night.

You can see the lights from Hahira. If you have this right down the road, you’re going to see those. And I know it’s not about light pollution, it’s just about the human aspect of it.

People pay a ton of money, and he said half a million, between about eight people, it’s probably more like four million.

We did not pay money to get out here and have this right down the road from us. Not that we’re too good, but it’s just not a commercial area.

So please, I implore you, don’t set a precedent for going commercial here.

I don’t know where each of y’all live, but imagine a Dollar General right at the corner next to your house. You probably wouldn’t be happy either.

So please don’t set a precedent. We don’t want this here. You can dress up something all you want, it’s still what it is.

I didn’t have a lot of time to prepare for this. I got off work early to rush down here.

As y’all’s constituents, please take the wishes of the many, versus the dollars of the few.

The developers stood up and wanted to speak, but Chair Vicki Rountree said, “Actually, I’m sorry, we’ve closed the public hearing portion. You’ll have that opportunity at the Council meeting.”

Commissioner Tommy Willis said he had already said beforehand that it was spot zoning. Then he made a motion to recommend denial of the request for that reason. Commissioner Calvin Graham seconded.

The vote was 7:1 for the motion to recommend denial.

Franklin Bailey and Steve Miller were slow (reluctant?) to vote to recommend denial. 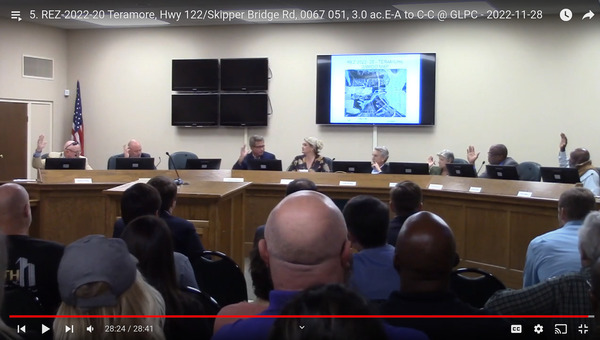 Only Commissioner Chip Wildes voted against the motion. 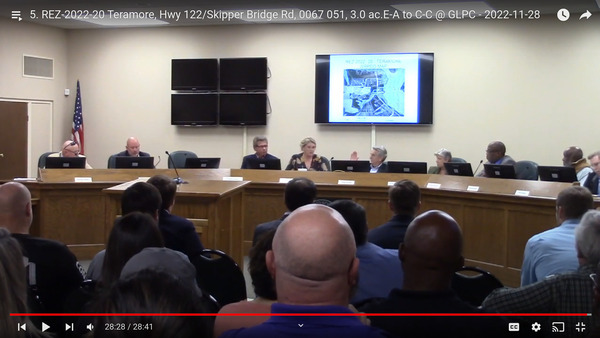 Below are links to each LAKE video of each agenda item, with a few notes by Gretchen Quarterman, followed by a LAKE video playlist. See also the agenda and board packet.