I ask you and FERC to stop Sabal Trail from telling newspapers things that Spectra Energy’s own corporate documents refute, and to start paying attention to multiple requests by county commissions and other affected parties.

According to "Sabal Trail: Eminent domain accusation ‘hard to believe’" by Joe Adgie in the Valdosta Times today, 19 November 2014,

‘Andrea Grover, director of stakeholder outreach for Sabal Trail, said allegations from homeowners that surveyors threatened eminent domain on their properties was “hard to believe.”’

Does Sabal Trail really not know what its own attorneys are sending to landowners? If Ms. Grover does not know, perhaps you could get Vice President of Stakeholder Outreach Susan Waller or Spectra Energy CEO Greg Ebel to find out what their attorneys are doing.

Similarly, you may want to ask them about this statement in the same newspaper article:

‘Grover said that Sabal Trail only works on properties that they are allowed to work on.

‘“We are only on those properties that we have permission to be there, or have agreements in place to be there,” Grover said. “These are things that we instill in our workforce.”’

Why then, was Sabal Trail sued for criminal trespass in Leesburg, Georgia 10 July 2014 by a landowner in Mitchell County, Georgia? I saw Ms. Grover leading the Sabal Trail team in the courtroom in Leesburg.

Bill Langdale, spelling out that Georgia eminent domain law does not apply to a pipeline that is of no benefit to Georgia.

In the same newspaper article, Ms. Grover admitted there are no agreements in place now for use of Sabal Trail gas in Georgia:

‘Grover also said that those living along the pipeline’s route will be able to get natural gas.

‘“The community can benefit from taking natural gas for their community use when the pipelines are put in service,” Grover said. “We would put the local communities and municipalities in contact with our business development group and they can look for locations that are best for gas to come off, what the structure would look like, and timing and all of that, and work to get some agreements in place.”’

Also in the newspaper article there is an erroneous assertion about easements:

‘Grover said that once the pipeline was constructed and the land on the easement was replaced, landowners could do whatever they wanted with the land, including farming of the land.’

‘Spectra Energy investigates encroachment by non-company individuals in the pipeline right-of-way. These include activities that have been reported by the encroaching party to the state one call service by calling 811, and those activities that are discovered by the company through aerial and/or ground patrol that have not been reported by calling 811. Right-of-Way encroachments include installation of such things as:
• Buildings/Mobile Homes • Fences • Utility Lines
• Pipelines • Roads • Trees’

Why is Sabal Trail telling a newspaper something its own brochure for public officials contradicts?

‘For safety reasons, the Federal Energy Regulatory Committee requires three feet of cover for the pipeline, and Grover said that they would negotiate with landowners for different allowances, such as if they needed the pipeline to run deeper than the minimum 36 inch allowance.’

See my submittal 20141117-5040 about the incident just this month in Berrien County, Georgia where a ditch puller broke a SONAT pipeline.

See the submittal 20141113-5199 by Southern Natural Gas about Sabal Trail’s inadequate plans for boring under existing pipelines, as well as far too many pipeline crossings.

‘NOW, THEREFORE BE IT RESOLVED, that the Colquitt County Board of Commissioners adamantly urge that Sahal Trail Natural Gas Pipeline should make every effort to ensure that the Sabal Trail Natural Gas Pipeline is buried with a minimum of five (5) feet of top cover when traversing agricultural properties to include pasture land, cultivated lands, surface drains, diversions, waterways, open ditches and streams.’ 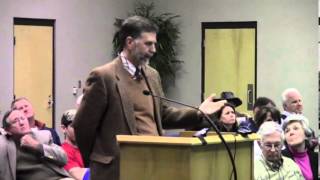 Here is a video of Colquitt County Attorney Lester Castelow informing FERC and Sabal Trail of that resolution at the 5 March 2014 FERC Scoping Meeting in Moultrie, Georgia. He said he had already emailed that resolution to FERC. You can see Sabal Trail’s Andrea Grover sitting in the audience listening, and FERC’s John Peconom sitting at the front table.

Castelow warned about top cover on dirt roads, explicitly mentioning ditches. Where is any acknowledgement by Sabal Trail of this issue, very recently demonstrated by the ditch-digger SONAT pipeline break in Berrien County, Georgia? 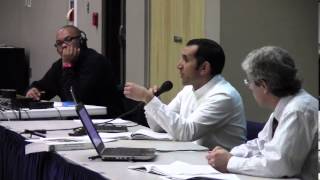 Here is a video of FERC’s John Peconom saying at the 5 March 2014 Moultrie FERC Scoping Meeting that in other states FERC has required more than three feet top cover:

Plenty of evidence has been presented to FERC that at least five feet of top cover should be part of any pipeline plan in Georgia.

This letter and all three attachments are integral parts of this filing, and I request FERC post all of them on its ecomment system so all subscribers to docket PF14-1 and the general public can see them. The three attachments, once again, are:

I ask FERC to get Sabal Trail to come up to speed on what their own attorneys are doing, to remember what is actually happening on the ground in Georgia, and to stop telling newspapers things that are simply not true.

And once again I urge FERC to deny any permit for Sabal Trail’s proposed environmentally damaging and hazardous pipeline, which would take significant rights from landowners, and for which no need has ever been demonstrated.