“The SONAT pipeline that broke in Berrien County, Georgia was only a 9- or 10-inch line, I’m told at 800PSI. Sabal Trail proposes a 36-inch line, at much higher pressure. I’m no expert, but that seems like at least twenty times the explosive capacity. I don’t want that risk for any of my neighbors anywhere.”

This is a response to FERC’s 15 October 2014 Supplemental Notice of Intent (NOI) To Prepare an Environmental Impact Statement (EIS) for the Planned Southeast Market Pipelines Project.

I read with interest "Comments to October 15, 2014, Notice of Intent to prepare an Environmental Impact Statement for the Planned Southeast Market Pipelines Project of Southern Natural Gas Company, L.L.C. under PF14-1-000." (Accession Number 20141113-5199), in which SONAT says: 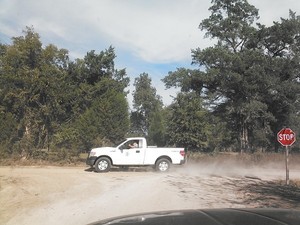 On 6 November 2014 I was alerted to an example of soil destabilization of an offshoot of the same SONAT pipeline referenced in the above SONAT ecomment. A friend called me about an emergency radio report of a pipeline break on Bradford Road in Berrien County, Georgia, a few miles from my house. I drove there to find Kinder Morgan trucks heading for the break.

In this picture you can see vehicles from the Berrien County Sheriff, the city of Nashville, Georgia, the Georgia Department of Transportation, and Kinder Morgan. Not seen are Lowndes County Sheriff vehicles at the border between Lowndes and Berrien Counties.

Here is a picture of the location of the break, in the ditch across from 986 Bradford Road. That break was caused by routine maintenance of a dirt road, when a ditch puller, which pulls dirt out of the ditch to be spread by a road grader, hit the pipe. My neighbors who were evacuated were lucky there was no spark to set off the gas, or they could well have had no houses to return to. Even with no spark, the neighbors tell me it was "like a bomb going off". And that a cloud of dust 300 feet high was seen. 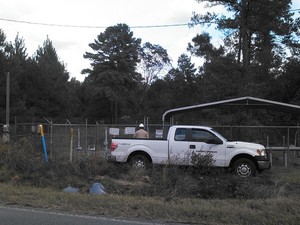 It turns out the valves already used by then to turn off the gas in that pipe are on my property in Lowndes County, Georgia, which you can see in this picture with a Kinder Morgan employee who said he had been called from Tallahassee, Florida, 90 miles away, to deal with the issue. For a year now I’ve been telling people I am not a directly-affected landowner. No longer can I say that. 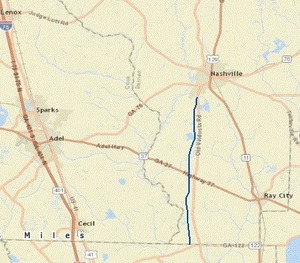 This pipeline feeds SONAT customers in Nashville, Georgia, as you can see by this map from PHMSA’s National Pipeline Mapper. This SONAT pipeline was also installed in the 1950s, long before solar power was a viable solution. But now solar power is the least expensive energy source available. It is also faster to install than a new pipeline, far less destructive to the environment, requires no eminent domain, and has zero risk of leaks or explosions.

Unlike that existing SONAT pipeline, the proposed Sabal Trail pipeline does not serve anyone in Georgia. Plus, as Nonami Oglethorpe, LLC and Georgia Rep. Winfred Dukes pointed out to FERC the same day as SONAT filed the above-referenced ecomment, FPL and Spectra Energy have not demonstrated any need by anyone for the Sabal Trail pipeline.

The SONAT pipeline that broke in Berrien County, Georgia was only a 9- or 10-inch line, I’m told at 800PSI. Sabal Trail proposes a 36-inch line, at much higher pressure. I’m no expert, but that seems like at least twenty times the explosive capacity. I don’t want that risk for any of my neighbors anywhere.

I urge FERC to deny any permit for the Sabal Trail pipeline.