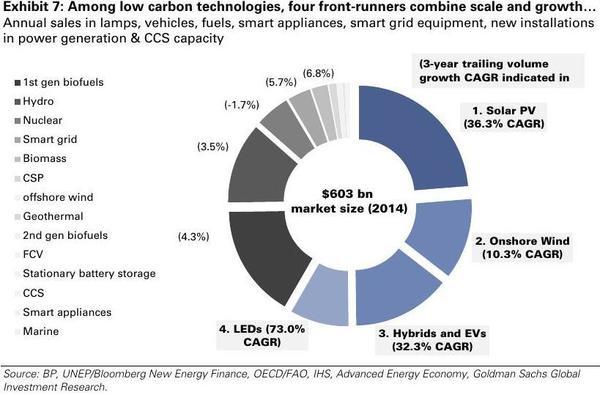 “Wind and solar are on track to exceed 100 gigawatts in new installations for the first time,” END_OF_DOCUMENT_TOKEN_TO_BE_REPLACED

Yet another fireball, water supply turned off, state of emergency, from an oil train. When did you last hear of a solar farm explosion? Do we expect hastily-built and unnecessary fracked methane pipelines to be any safer than these shoddy exploding shale oil train tank cars? How long must fossil fuel fireballs rain down before we all get on with clean sun, wind, and water to power the world?

DALTON, Ga. — Trillions of cubic feet of natural gas believed to lie below the hills of northwest Georgia have remained virtually untouched and unwanted — until now.

Shale gas drilling is slowing across the country, but a handful of companies are poking around this corner of the state looking for the next natural gas “play.” If they succeed, Georgia could join the ranks of states reaping jobs, revenue and fears of environmental damage from energy production, The Atlanta Journal-Constitution has learned….

In Alabama, the Conasauga shale field contains 625 trillion cubic feet of gas, according to Bill Thomas, a geologist who taught at the University of Kentucky and Georgia State. A similar amount could be underground in Northwest Georgia, he added.

No fracking. No nuclear. No biomass. Let’s get on with solar and wind.

Fox News recently claimed that “solar won’t work in America because it’s not as sunny as Germany”. Such statements are common for a network that has long lost its credibility. Unfortunately too many take such gibberish at face value. Thus columns like “environmentalism or obstructionism?” are not surprising, but in the end it’s the facts that matter:

END_OF_DOCUMENT_TOKEN_TO_BE_REPLACED

Lest you think fracking is something that happens only in faraway places like Alberta or Pennsylvania, look at this map of North American shale gas basins, extending right through the Appalachians from Pennsylvania through West Virginia, Virginia, Tennessee, and North Carolina into Georgia, Alabama, and Mississippi.

How long before Georgia Power or Southern Company decide natural gas would be even cheaper if they fracked in Georgia or Alabama or Mississippi? How long until unavoidable human error starts fracking polluting our local groundwater and rivers? For that matter, isn’t it bad enough already that other people’s water is fracked for cheap gas in Georgia?

We could just get on with solar power, which doesn’t spill.

“There is no amount of regulation that can overcome human error,”

said Alberta’s Energy Resources Conservation Board (ERCB) spokesman Darin Barter. ERCB released an investigation report that cites inadequate management of risks as one of the main causes of a September 2011 accident that contaminated groundwater with toxic hydraulic fracturing chemicals, including the cancer causing agent known as BTEX (benzene, toulene, ethylbenzene, and xylene).

At least the company involved in this particular incident did something about it:

Personnel from Crew Energy told the Calgary Herald the company is “embarrassed” about the accident. Rob Morgan, chief operating officer for Crew said, “there’s no question of our appreciation of the severity of this,” adding, “pretty much all of the personnel who were involved in this particular circumstance are no longer with the company.”

But the groundwater is still contaminated. And where will they find replacement personnel who will never make mistakes?

Meanwhile, a solar spill is called a nice day.