The only split vote was for:
5.c. Professional Services for Sampling, Monitoring and Reporting of Impaired Streams 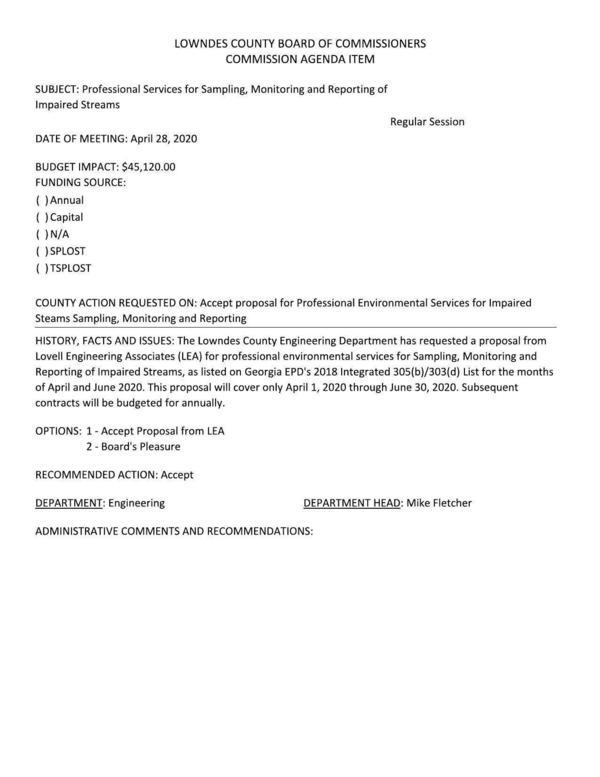 Nevermind the Commissioners did not have before them the plan for that monitoring. Nevermind there had been no competitive bidding. Nevermind that as a private company the contractor is not required to respond to open records requests. Nevermind that the contractor is only required to report annually, making whatever monitoring they do useless for the work everyone else is doing finding, fixing, and verifying contamination sources, and also useless for warning people using the rivers.

There were no Citizens Wishing to Be Heard, not that it would have mattered, because as usual that was after the Commissioners voted. This is the only County Commission of the many counties I’ve been to in two states that does not let citizens speak either at the beginning of the session or on each agenda item as it comes up.

These are the agenda items sorted by highest cost first:

All the items that could be bid were, except the one about stream monitoring.

I’d still like to compliment Lowndes County Utilities for pro-actively replacing that Coleman Road Force Main. They already did an emergency repair for about $100,000 in October 2018 after sewage spills in July 2018 and September 2017. Lowndes County has reported no recent spills, not even as recent as Valdosta’s notorious December 2018 record spill.

The agenda sheets are on the LAKE website. We do not yet have the full agenda packet, although we did file an open records request. We also do not have the stream monitoring plan, even though we filed a separate open records request for that. And so far as we know, the Commissioners who voted for that $45,000 sole-source opaque project hadn’t seen that plan, either.

Gretchen’s notes on each agenda item