12,057 / 2,326 = 5.18 times, which is more than 2 * 2 = 4, ergo Wellinghoff was right. Sure, you can argue that most of this increase happened before he made his prediction in August 2013, but the 2013 numbers weren’t out then, so part of this new growth record is after anything he knew, and it turns out his doubling every two years was conservative.

Even that report under-represents real solar generation, because it doesn’t count solar power used on the customer side of the meter, which is where most rooftop solar power goes, including my 15 kiloWatts on my farm workshop. 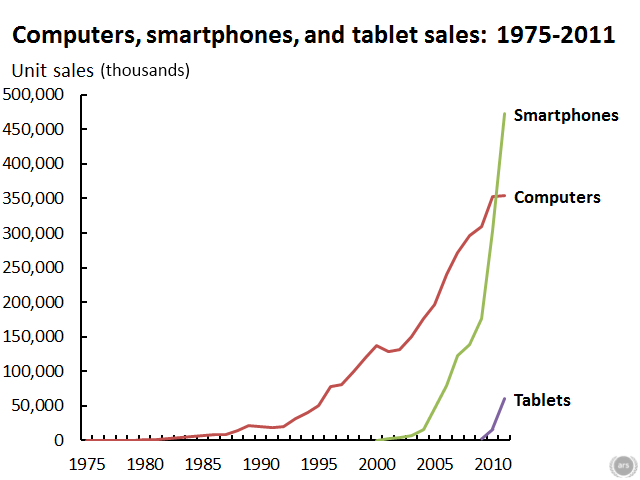 Each of the three sectors that have contributed to the significant overall solar gains also has strong near term growth prospects. Currently, there are 6,459 MW of proposed utility scale PV and 1,841 MW of proposed thermal solar. Many of the same factors driving utility-level solar are expected to push net metered capacity as well. Remember Moore’s Law for solar power, the observation that solar power costs keep dropping exponentially and causing exponentially increasing eployment, much like the prices of computing power (CPUs, memory, disks) kept dropping and driving up deployment of computers, smartphones, and tablets, not to mention the Internet? Also known as Swanson’s law, to emphasize that it’s manufacturing capacity that is driving down solar costs, not efficiency improvements? Those are the factors to which eia seems to allude.

In summary, the U.S. solar capacity has moved quickly from a relatively small contributor to the nation’s total electric capacity into a one of comparative significance. Much like the wind sector growth, which grew tremendously from 6,456 MW in January 2005 to 60,661 MW to January 2014, solar capacity is quite clearly up and coming.

And if solar continues growing like compund interest it will generate more power than anything else in the U.S. in less than a decade.

We should stop wasting money on the nuclear boondoggle at Plant Vogtle and elsewhere which is like burning $20 bills to generate electricity. We should stop foolish plans to build a destructive and hazardous fracked methane pipline through Alabama, south Georgia, and Florida for no local benefit.

We should get on with powering the southeast and every U.S. state and the world with sun, wind, and water. More here on how solar power is rising on Georgia, the southeast, the U.S., and the world. All the fossil fuel companies, and all their electric utilities, can not stop that sun from coming up.