Nukes cost too much and are too centralized; sun and wind are the power we need and can afford.

Andrew Sullivan on the Dish 8 December 2012, Ask McKibben Anything: What About Nuclear Energy?

In October, Bill spoke to Marlene Spoerri of the Carnegie Council for Ethics in International Affairs about his views on nuclear power:

I don’t foresee, especially post-Fukushima, a kind of political system in most of the world that would let it happen. Even before Fukushima, it wasn’t happening. The reason basically had to do with cost. Environmentalists helped shut down nuclear power, but really it was Wall Street that pulled the plug on it. It’s too expensive. It’s like burning $20 bills to generate electricity. It requires, if you’re going to do it, massive government subsidy. If you’re going to apply that subsidy, you’re better off doing it with other things that will generate more kilowatt hours per buck.

Now, that said, we should keep trying to figure out if there are some ways to do it that are more acceptable than the ones we’ve got now. You read about developments on the fringes, Thorium reactors and so on and so forth. But my guess is that in the timeframe we’ve got this is not going to be the place we go. 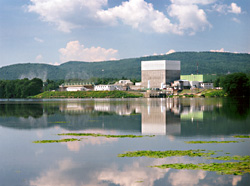 Shutting down Vermont Yankee, according to McKibben, was “the easiest case there ever was to make.” Noting it took a “30-foot wall of water” to damage the Fukushima nuclear plant in Japan, McKibben recalls that the side of a cooling tower at Yankee “just fell off” a few years ago. Entergy, the owner of the Vernon plant, “shouldn’t be allowed to run even a chain of convenience stores,” McKibben charges.

The trend in energy generation, he observes, is “away from few and big and toward many and small.” He’s all for wind power, for example, despite the opposition of some Vermont greens to ridgeline installations. “Every kind of energy has drawbacks,” McKibben acknowledges. “In general, the benefit of the doubt belongs to renewable energy.”