After many years of rising sentiment, the voters in November 2019, approved changing Lowndes County from being one of only two of 159 Georgia counties that elected its Tax Assessors to appointing them, and the legislature agreed. Finally in September 2020 the Lowndes County Commission appointed three new Assessors, and on January 5, 2021, they were sworn in. Their first official meeting is tomorrow.

Applying for the Board of Tax Assessors according to the agenda for the 21 September, 2020, Work Session and the Tuesday, 22 September Regular Session were Mr. Gene Felts and Mrs. Gretchen Quarterman. The Tuesday voting was a bit more complicated. END_OF_DOCUMENT_TOKEN_TO_BE_REPLACED 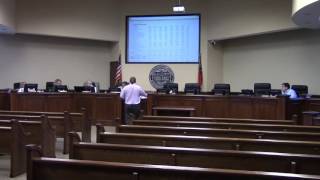 The Tax Appraiser finally showed up, and got the longest discussion at half an hour, with County Extension clocking in at 22 minutes, Juvenile Court at 15, and the Airport Authority at almost 13 minutes, in the last of three days of budget requests to the Lowndes County Commission.

Here are links to each of the LAKE videos of this day 3 of 3 budget meeting, followed by a video playlist. END_OF_DOCUMENT_TOKEN_TO_BE_REPLACED The request for a new State Court Judge by Judge John Kent Edwards Jr. took 27 and a half minutes, plus his eight minute explanation of fines moving from Sheriff to State Court. More people might have showed up to hear if anybody had known about these items. Commissioners asked a surprising number of questions about them and about the Little River stream gauge and the opaque pest control bids. Of course, then people might have seen the proposed third no-bid contract to the same firm this month. They vote tonight.

Here’s the agenda, with links to the videos and a few notes:

A northeastern Pennsylvania judge was ordered Thursday to spend nearly three decades in prison for his role in a massive bribery scandal that prompted the state’s high court to toss thousands of juvenile convictions and left lasting scars on the children who appeared in his courtroom and their hapless families.

Former Luzerne County Judge Mark Ciavarella Jr. was sentenced to 28 years in federal prison for taking a $1 million bribe from the builder of a pair of juvenile detention centers in a case that became known as “kids for cash.”

Now that’s privatization of justice! Looks a lot like no justice at all. Makes you wonder how many other people are in prison who shouldn’t be.

PS: Had to go to the Guardian for the picture, though.

Received yesterday as the most recent of many comments on Let the Humane Society train animal control officers. -jsq

I know many of the veterinarians do not want anything to do with the shelter; for whatever reason. Whoever with the number of feral cats that come to the shelter each day… the vet would have to come several times a day just for them; they have no way to house feral cats. And no place to hold them for long periods (not even hours at that rate), during puppy an kitten season, sometimes 30 or more cats a day are euthanized.

I know the Humane Society offered both sheriffs

END_OF_DOCUMENT_TOKEN_TO_BE_REPLACED

Calling investigative reporters: here’s a trail of fishy behavior in the Brooks County elections. George Rhynes brings up an interesting point in Quitman Ten, Judge Porter’s decision, News Media Outlets, Is Another Investigation Needed, and can Justice Be Found in South Georgia? The two write-in candidates in the general election for the Brooks County Board of Education were allowed to run despite a clear restriction in the Georgia code, O.C.G.A. 21-2-133. This restriction is mentioned in the Ga. Secretary of State Candidate Training Guide:

No person shall be eligible as a write-in candidate in a general or special election if such person was a candidate for nomination or election to the same office in the immediately preceding primary.

Also in the same department’s END_OF_DOCUMENT_TOKEN_TO_BE_REPLACED