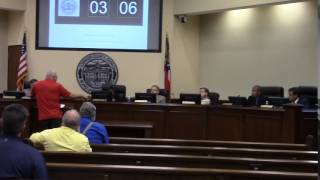 ADS trash collection price and performance wasn’t on the agenda, but even former Commissioner Richard Lee stood up to speak about it two weeks ago at the April 14th 2015 Regular Session, along with two other citizens David Eaton and me. See also VDT trash story. The VDT didn’t pick up on Ann Swayze’s smoot and soot concerns also being related, because nobody stood up to complain about burning in Foxborough before the collection centers closed.

Commissioners did the right thing and unanimously rezoned Vallotton Farms back to Estate Agriculture, like it was before county-wide rezoning happened. It wasn’t like the County Planner said, “it has developed around it in an urban way”. The subject land and landowners didn’t do that: other people have built subdivisions around it the the county’s active promotion. And for once agriculture won, after landowner attorney Bill Langdale, Commissioner Demarcus Marshall, and I spoke up for it.

They’re even going to preserve the canopy on Boring Pond Road and I thanked the County Engineer for that.

The two Sheriff’s requests for END_OF_DOCUMENT_TOKEN_TO_BE_REPLACED