Not on the agenda, Chairman Bill Slaughter at the end of the meeting said Utilities Director Steve Stalvey had been testing water quality on the Withlacoochee River. On December 31, bacterial counts were acceptable. But on January 6, 2020, counts were quite high, so the county made and posted some warning signs at Knights Ferry, Nankin, and State Line (GA 31) Boat Ramps. 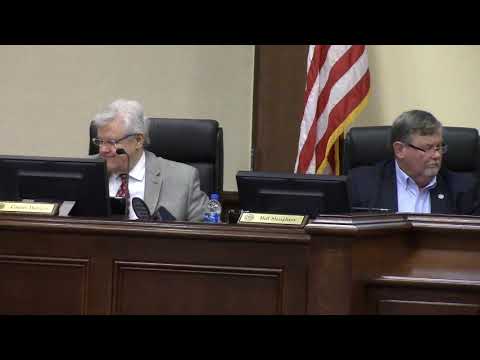 Here is one of the county’s signs, at Knights Ferry Boat Ramp, with a sign by WWALS Watershed Coalition (Suwannee Riverkeeper) at the bottom of the other pole with the water trail signs.

Here are the county’s test results thus far, as well as results from all the other parties that have been testing. 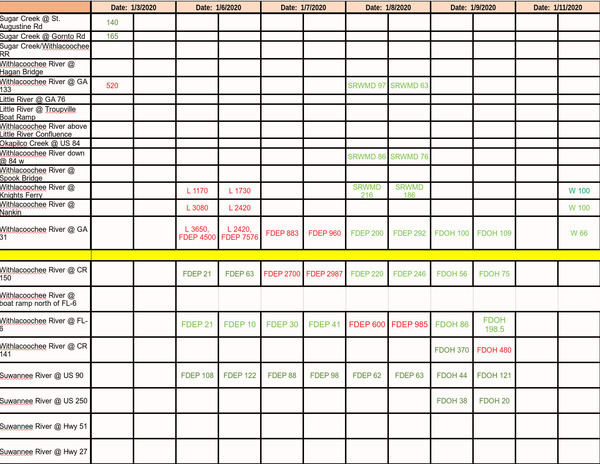 County Manager Joe Pritchard wanted to say that the county is using two testing laboratories. The Chairman remarked that their numbers matched, and on January 6 they were high when Florida’s numbers were high at GA 31.

Commissioner Demarcus Marshall wanted to know if there was anything else the county could do, since if there were problems in Florida such as he heard about Wednesday, there are probably problems in Georgia.

The county is also going to test at US 84 on the Withlacoochee River and on Okapilco Creek. Since they usually test Mondays, we should expect some results for this week by tomorrow.

Commissioner Demarcus Marshall wondered if there was anything beyond sucking the sewage out of the water that could be done, such as putting some chemical in there to counter the sewage. The Chairman said he thought people would object to that and with flow the river would eventually clean itself.

Valdosta did dump lime into Sugar Creek, which is what they usually do at spill locations.

The only other thing that took much more than a minute was 6.c. Request to Purchase New Firefighter Turnout Gear.

Update 2020-01-15: They tabled both the turnout gear and the other fire item, 7 a. Bid for a 3,000 Gallon Tanker for the Fire Department, until some time in February, after the annual county retreat. The retreat itself has no publicly scheduled time yet. Last year it was Thursday-Friday, February 7-8, 2019. The equivalent dates for this year would be Thursday-Friday, February 6-7, 2020.