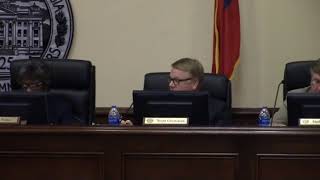 Two weeks ago, they spent the most time (5.5 minutes) on the two sections of 5. Proclamation Presentations for National Drug Court Month.

They spent 2.5 minutes on bids and almost 2 minutes (almost 5.5 total) on the wetland credits for the North Lowndes Park Soccer Complex.

They tabled the Airport Authority appointment waiting for more information. Maybe they noticed George Page had also asked the City of Valdosta to appoint him.

The alleged County Attorney, with his microphone three feet from his face and pointing 90 degrees away, muttered something about the mysterious Wisconsin bond issue.

The Probation agreement and Electronic Monitoring Contract got more than three minutes total. They spent a bit more than a minute voting on a law form for the opioid litigation.

The Hay Lease Agreement Amendment is a water item, because it’s about the county’s spray field, also known as its Land Application Site (LAS). And the Bevel Creek Lift Station Pump that feeds it. Final water item: dates of completion for the GEFA Loan Agreement; they did provide a clue what that loan was for.

Here are links to each LAKE video of each agenda item, with a few notes, followed by a LAKE video playlist. See also the LAKE videos of the previous morning’s Work Session and the agenda.