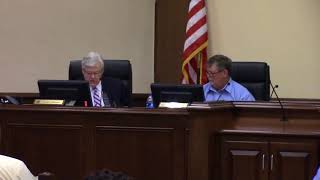 Opioid litigation will be added to the agenda for this evening, although not for voting, as 8.i, Selection of Legal Firm for Opioid Litigation: Select legal firm,

The Studstill Law Firm and the Blasingame, Burch, Garrard & Ashley Law Firm have both submitted proposals to represent Lowndes County in the opioid litigation.

That was the longest agenda item at the Monday morning Work Session. The Probation Resolution and Services Agreement, which had been tabled two weeks before, got almost two minutes, including questions about cost. Add the minute and a half for the Electronic Monitoring Contract and those two items with the same presenter got the longest total.

The two North Lowndes Park Soccer Complex items, Wetland Credits and Bids, that will massively change Hahira, did not get a total of two minutes. The Hay Lease Agreement Amendment is another water item, because it’s about the county’s spray field, also known as its Land Application Site (LAS). And the Bevel Creek Lift Station Pump that feeds it. Final water item: dates of completion for the GEFA Loan Agreement, whatever it’s for.

The mysterious Wisconsin Public Finance Authority Bond Issue is to finance a project on Old Statenville Road in the Valdosta City Limits.

They’re going to reappoint Steve Everett to the Valdosta-Lowndes County Airport Authority; he did not speak. And George Page would also like to be considered.

Here are links to each LAKE video of each agenda item, with a few notes, followed by a LAKE video playlist. See also the agenda.