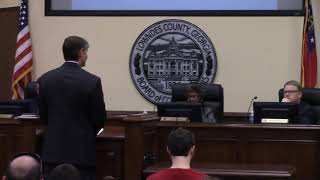 Again like in the previous morning’s Work Session the lengthiest regular item was the rezoning on Rocky Ford Road for the church-proposed Camp Rock, mostly with attorney Jack Langdale speaking for, including that a “wilderness camp” for unfortunate children doesn’t need a buffer, and any future buyers of neighboring property beware.

The Sharp family said for seven years they have been trying to get somebody to do something about stray dogs, only to discover Animal Control doesn’t work weekends anymore, and the Sheriff’s office won’t do anything, even though one of their family had been killed by the dogs and another bitten, and the dogs are now into their second and third generations running loose.

Third longest was 6.a. REZ-2018-01 Simmons, 3881 Bemiss Rd, R-10 to C-G .89 acres for “redevelopment as a retail store for new [?] and tile location”, for which Jack Langdale spoke much more briefly, and the vote was surprisingly split, with Commissioner Mark Wisenbaker voting against.

They meet for their annual retreat this morning.