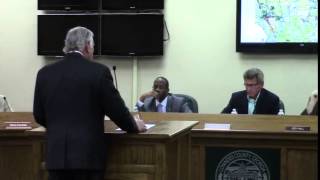 He didn’t bring agriculture to the city; the city come to him….

I think it’s going to be real hard one day trying to eat this concrete.

See for yourself. And remember the County Commission votes on this case this evening at 5:30 PM; maybe you’d like to come speak for.

Presentation by attorney for the applicant Bill Langdale.

We need more land in agriculture, rather than less. And this land has been agricultural since long before any of the adjoining subdivisions.

As an agricultural landowner with E-A zoning, it’s refreshing to see someone else wanting to keep part of Lowndes County that way. 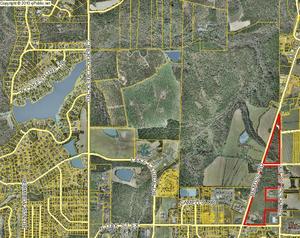 Also, as the president of WWALS Watershed Coalition, which is the watershed organization for this area, I assume you’re all aware that much of Cherry Creek is actually in the subject property, which is also upstream not only from Cherry Lake, but the Cherry Creek Sink, right at the Withlacoochee River. Which like Shadrick Sink, right across the river, leaks down into the aquifer. If I’m not mistaken, Shadrick Sink is the reason Valdosta already had to put its water wells 400 feet deep to get under the river water that’s in the aquifer. So this use, this agricultural use of the land, is probably better for that land upstream from the sink, than other uses that might let contamination into the creek and then down to the sink and into the aquifer.

So for those reasons I’d like to say I’m in favor of this rezoning.

See above Lowndes County Tax Assessors map for Vallotton Farms (both the part outlined in red that appears to be the subject of the rezoning and the bigger part west of Bemiss Road) on Cherry Creek, upstream from the dam and from and upstream from Cherry Creek Sink on the Withlacoochee River, which leaks into our drinking water in the Floridan Aquifer.

As you can see in the video, at least two Commissioners agreed from the podium with the speakers for agriculture, and another thanked me after the meeting was over (as did Bill Langdale).

I agree with Mr. Langdale and Mr. Quarterman, agriculture is needed in the county, and it is refreshing to see this movement.

I’m glad to see us trying to preserve some agricultural land, because I think it’s going to be real hard day trying to eat this concrete.

I’m not a big fan of what they grow there (Monsanto crops with pesticides), but that’s more readily fixable than houses and streets where farmland now is.