Most of the story is about proposed fracking in north Georgia that we noted back in 2013, plus fossil fuel industry propaganda about how great they say that would be for the local economy, with very little about the immense destruction, environmental hazards, and invasions of private property that would ensue. The AJC version of that Dan Chapman story didn’t seem to have this south Georgia fracking information in this Athens version that came out a few days later.

Environmental groups, including the Southern Environmental Law Center (SELC), were unaware of the renewed interest in northwest Georgia’s natural gas field. The SELC is challenging new fracking rules in Tennessee and proposals to drill on public land in Alabama.

And nothing about SELC being aware at all of any potential fracking in south Georgia.

Industry has contemplated the Mesozoic basins of the East Coast since the 1980s. The USGS report was released in June coming while lawmakers in North Carolina and elsewhere considered regulations for hydraulic fracturing and horizontal drilling. 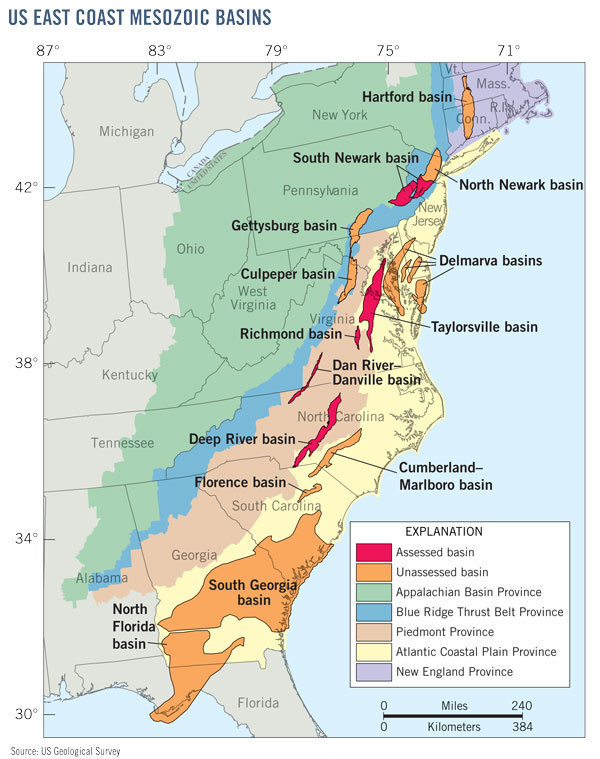 Yep, that map shows a South Georgia Basin covering much of south Georgia, including Augusta, Savannah, Brunswick, and apparently aas far inland as Macon, then across almost to the Alabama line.

Plus a North Florida Basin covering more of south Georgia (including it looks like Dougherty, Colquitt, Brooks, Lowndes, Lanier, Atkinson, and Ware Counties) and a big chunk of north Florida.