The big item was they passed the Resolution to support GA HR 158 for dedicated fee collections. 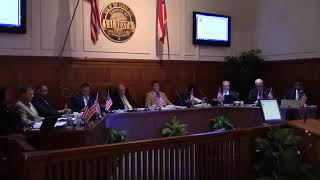 That and the T-SPLOST projects and upcoming public meetings, by Mayor Gayle. There was only one Citizen to Be Heard, which was me, about the resolution and about public access to the Withlacoochee River at Gornto Road in Valdosta.

Below are links to the LAKE video of each item, with a few notes, followed by a LAKE video playlist. See also the agenda.